In March ’17, Union Hall suffered a fire that closed the venue, but the downstairs venue portion reopened on May 15th.  The renovated upstairs will reopen on July 21st.... 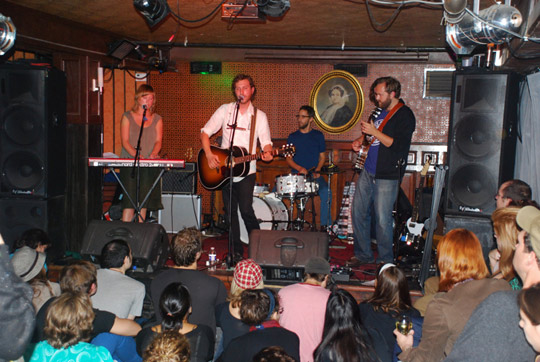 In March ’17, Union Hall suffered a fire that closed the venue, but the downstairs venue portion reopened on May 15th.  The renovated upstairs will reopen on July 21st.

Union Hall is located on 702 Union Street at Fifth Avenue in Brooklyn’s Park Slope.  It lays only four blocks south from the former Southpaw, and four blocks southeast of the new Littlefield.  It opened in the summer of 2006.  It also lays seven blocks north of sister venue Bell House, which opened in September 2008 and is managed by Union Hall.

The ground floor of Union Hall is either a library study converted into a bar or the other way around; books line one of the long walls, and the front area has the kind of sumptuous, over-stuffed chairs you’d find in a staid law firm.  The back half of the upstairs is more traditional in terms of (not that much) seating, but instead, there’s two bocce ball courts laid out in the center (that shuffleboard-meets-bowling game seen played by old continental European stereotypes).

The actual venue is downstairs, and can be a bit hard to find, as the stairs are all the way at the other end of the upstairs bar; doubly hard to find when the bar is cramped on weekend nights.  There’s a small middle hallway at the bottom of the stairs, made smaller by the usual merchandise table; at one end is the co-ed, stalls-only bathroom, and the other, the stage floor.  In keeping with the ‘grandparent’s place’ feel of the upstairs, the stage and stage floor are in what effectively looks like an old person’s basement, with out-of-fashion wallpaper, old-style portraits, and a display case of things found on a hunting trip in the 1930’s.  The ceiling is low, and there are a few quite obstructive pillars on the house-left; there is a bar at the back end of the small stage floor, near the door.  The stage itself is only slightly elevated above the audience floor; the floor swings to the house-left of the stage, then up along the side; band equipment is usually stored there.

Union Hall more resembles the low-end venues in the Bowery like the Cake Shop – small, lesser facilities, low price, cheap drinks, etc.  Generally, the acts occupy the lower end of the touring spectrum, but still somewhat higher than those of equivalent size venues in the Bowery; there’s less competition in Brooklyn, and it can serve as a second, Brooklyn stop on any band’s tour.  There’s also a bit of an ‘classy artsy’ feel to the place, lending itself to solo singer/songwriters or art community-supported events.  It’s a bit of a trek if you don’t live in the area – either you take a slow local train to within a block, or you take a faster express and end up ten-to-twelve blocks away.  The price of admission is a few bucks more than the usual Bowery haunts, more Mercury Lounge than Cake Shop, but the drinks aren’t, and it’s certainly a place you can get up close and personal with the band.

Bon Iver : For Emma, Forever Ago