Union Pool is located on 484 Union Avenue, Brooklyn, at the corner of Union & Meeker.  It lies in the shadow of the Brooklyn-Queens Expressway.  It also lies in... 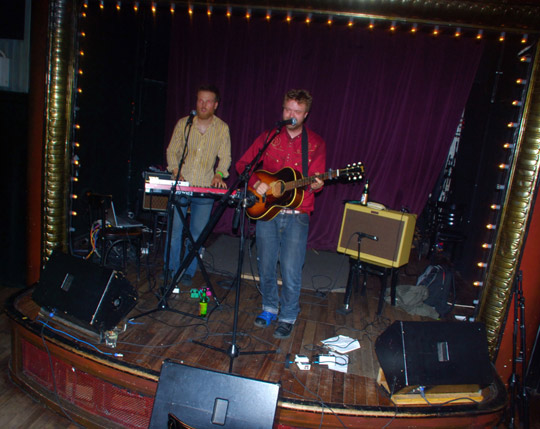 Union Pool is located on 484 Union Avenue, Brooklyn, at the corner of Union & Meeker.  It lies in the shadow of the Brooklyn-Queens Expressway.  It also lies in the Williamsburg area of Brooklyn, just one stop on the L away from Music Hall in Williamsburg.

The main front area of Union Pool is a large bar with booths as well (the venue had originally been a pool supply store, thus the name – not to be confused with McCarren Park Pool).  At the other end is an outdoor patio area, which one must walk through, in order to get to the stage floor area.  To the right, within the bar, are the bathrooms.  To the right in the patio area is the entrance to the stage floor area, after one passes through yet another foyer, and makes a left.  The small stage floor area has a non-tap bar on the house-right, and a set of stairs to a small balcony (including soundboard) to the house-left.  The stage itself is a few feet off the ground, with an lip, curtains, and surrounding lights that seem more suited to vaudeville (though nowhere near that size).

Other than country nights on Mondays, the shows at Union Pool are mostly indie-rock.  The acts aren’t that major, more in line with small Bowery area venues like Piano’s, though do seem to draw more from Brooklyn.  However, the ticket prices aren’t that much, and neither are the beers – plus it’s still a cut above such former DIY Brooklyn locales as Glasslands or Death By Audio.  Like the small Bowery venues, it’s not a must-see, but if a band you want to see happens to be playing there, it’s a nice place to catch them. 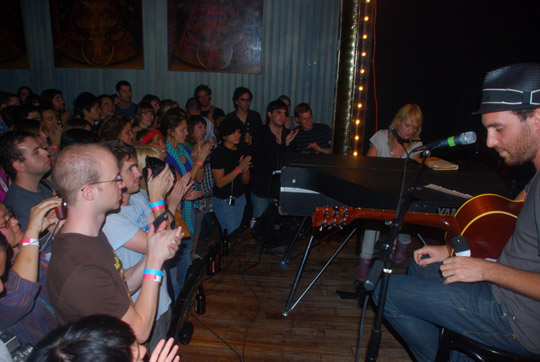 We Are Scientists : Brain Thrust Mastery