In the remote acreage of Four Sisters Ranch in the gorgeous Texas Hill Country, the 9th annual UTOPiAfest kicked-off.... 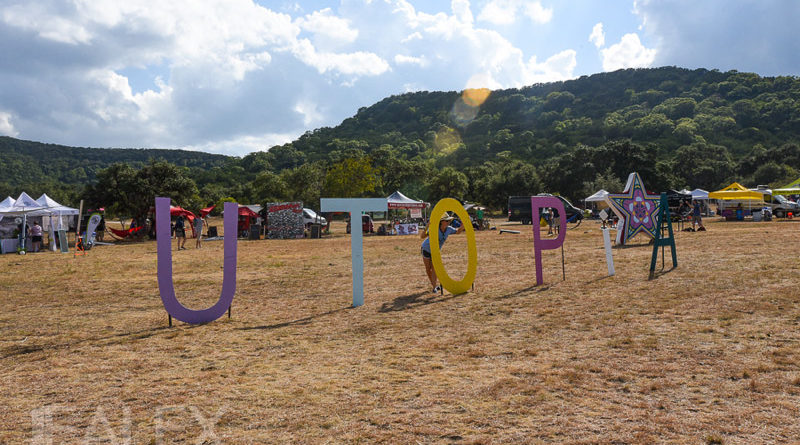 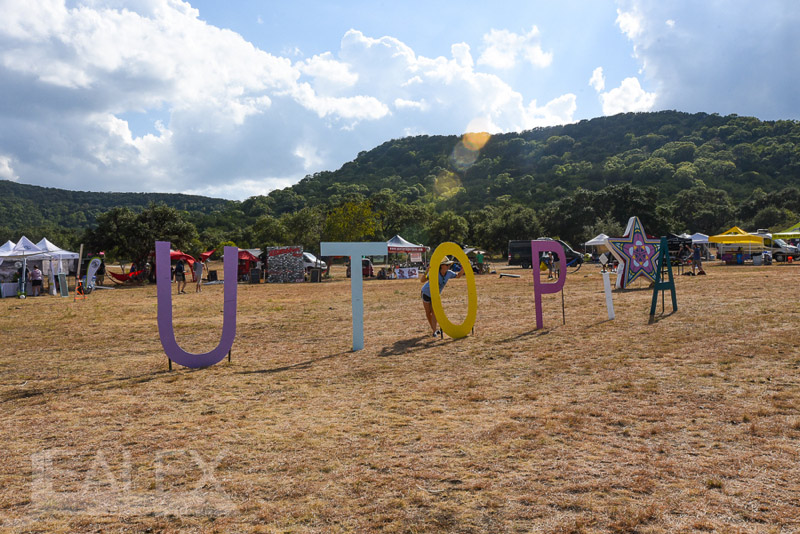 In the remote acreage of Four Sisters Ranch in the gorgeous Texas Hill Country, the 9th annual UTOPiAfest kicked-off on Thursday, September 21st with a friends and family welcoming party, and then opened to the masses on Friday, September 22nd for two full days of music, camping, and a range of outdoor activities. With an audience capped at 2,000, the event has served as a pilgrimage site over the years for a community of like-minded, mostly Texan fans to see some of the region’s best Americana, rock, funk, and pop while taking in the beauty of the surroundings.

The festival site is truly a unique Texas experience, spread out over 1,000 acres of mesquite and cactus studded limestone hills, there was plenty of space to either be close to the music or away from it all – a stark contrast to the claustrophobia-inducing festivals that fence audiences in confined spaces like cattle. Mornings and early afternoons were filled with activities for young and old, with outdoor outfitter REI having a large presence as in previous years with mountain biking, hiking, and wilderness survival classes and CLIF BAR hosting yard games and giveaways. At the Four Sisters tent, revelers could grab a partner for acroyoga, learn about local history, and practice a little hula hooping. The family vibes were strong at the event with a dedicated Kids Camp tent that hosted arts and crafts, magic shows, and puppet making. 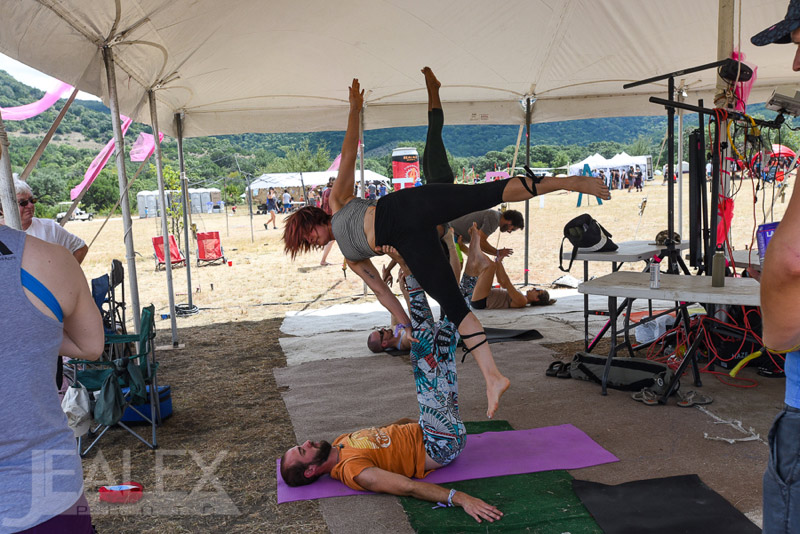 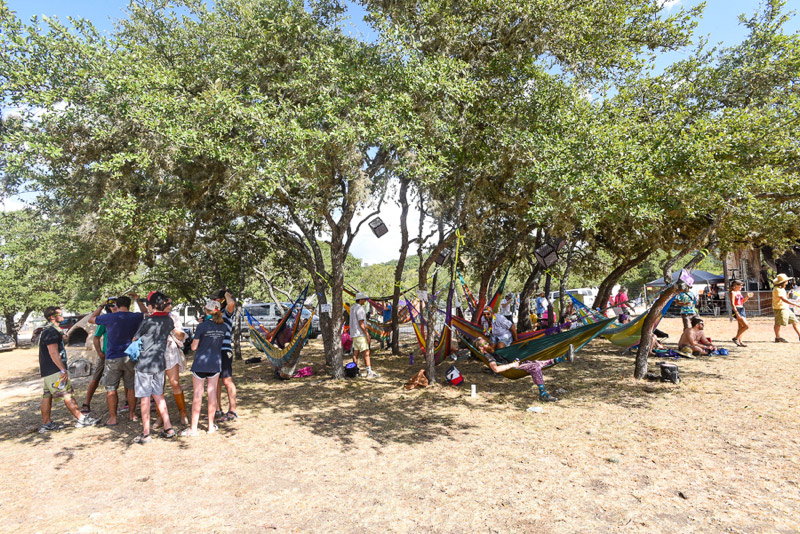 Thursday’s kick-off party was focused primarily on music at the smaller Arrowhead stage, which featured soft sand where people kicked off their sandals and got their groove on with complimentary beers in their hands from the daily happy hour tent set up by Real Ale Brewery. As darkness descended on the festival, nearby thunderstorms sent barreling gusts of wind over the surrounding hills and blew tents and canopies loose from their moorings. Unlike in previous years that were punctuated by occasional strong downpours, this was the only threat of bad weather all weekend. 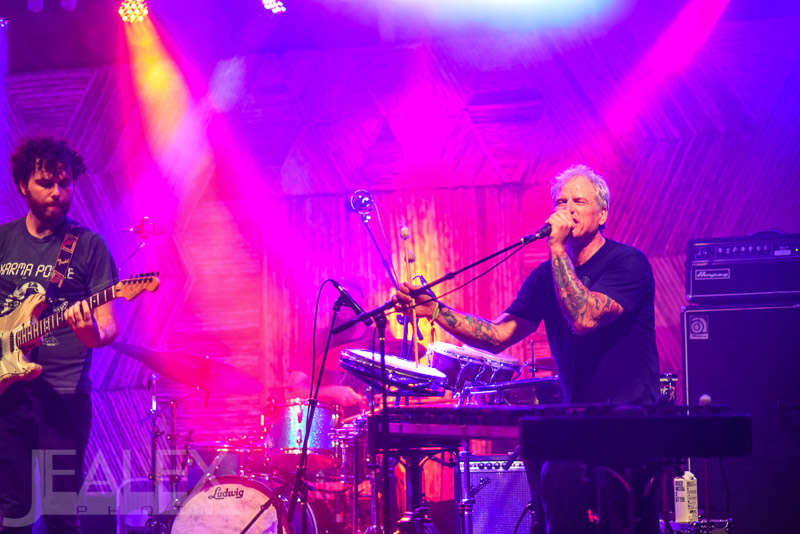 As the weather settled down, the New Orleans-based Mike Dillon Band came on the stage with their frenetic, Mr. Bungle-like jams. Dillon’s mastery of the vibraphone foreshadowed the range of musical virtuosity seen throughout the fest. Next up was Toubab Krewe, an Asheville, North Carolina instrumental band that featured instruments from Mali such as the 21-string harp lute called a kora. Finally, the opening night ended with the cumbia rhythms of the Utopia Players featuring members of Brownout! and Mike Dillon Band among other festival favorites. 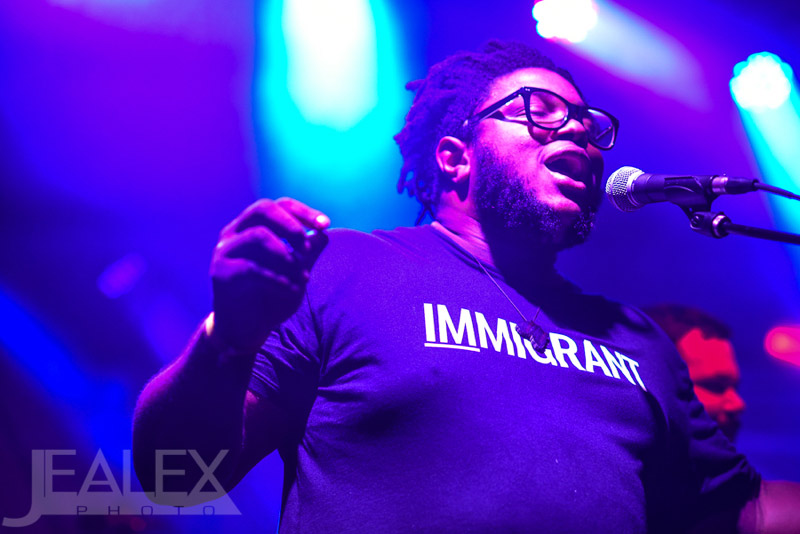 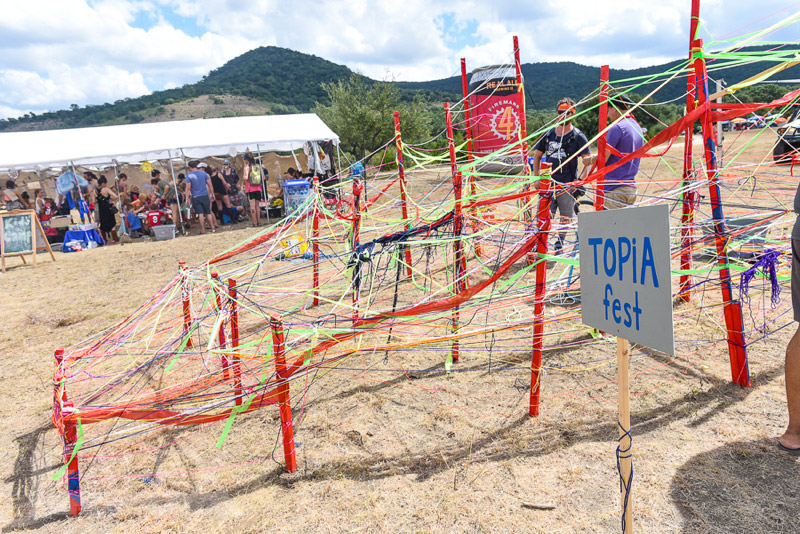 On Friday, droves of campers began populating the site, setting up tents in nearly every hospitable space that had a tree overhead to help beat the heat. Many attendees popped up canopies in the middle of the field just between the two main stages – benefiting from their proximity and that there were no overlapping set times. Early in the day, festival founder Travis Sutherland hopped on stage playing guitar with Cowboy Irie, his ‘90s country reggae tribute band. 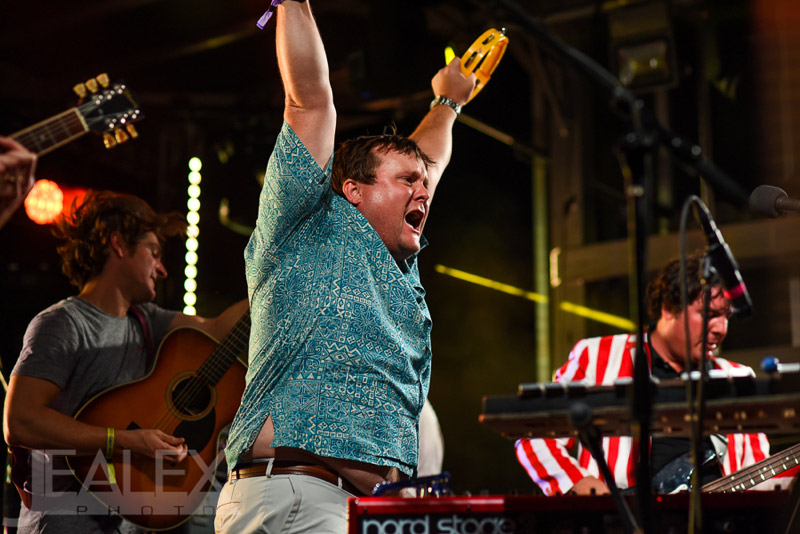 Friday was heavy on Americana, folk, and country during the daytime hours with performances by the dusty booted Austin band Wood and Wire, Swedish folk act Baskery that featured a trio of sisters, dreamy folk of the Deer, country western twang of The Wheeler Brothers, and arguably the stand out of the daytime acts, Elephant Revival. Featuring the talented vocalist and washboard, djembe, and stompboard-playing Bonnie Paine, the group performed a genre-bending mix of folk and bluegrass, with a twinge of psychedelia, taking the crowd into magic hour with a sublime version of Pink Floyd’s “Have a Cigar” and returning later for after hours at Tank Goodtimes, an unplugged jam session stage set up on a hill from the main event. 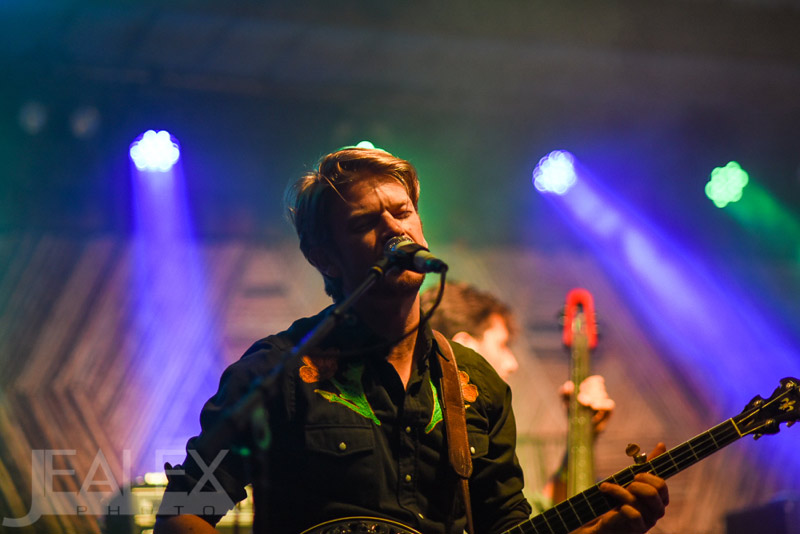 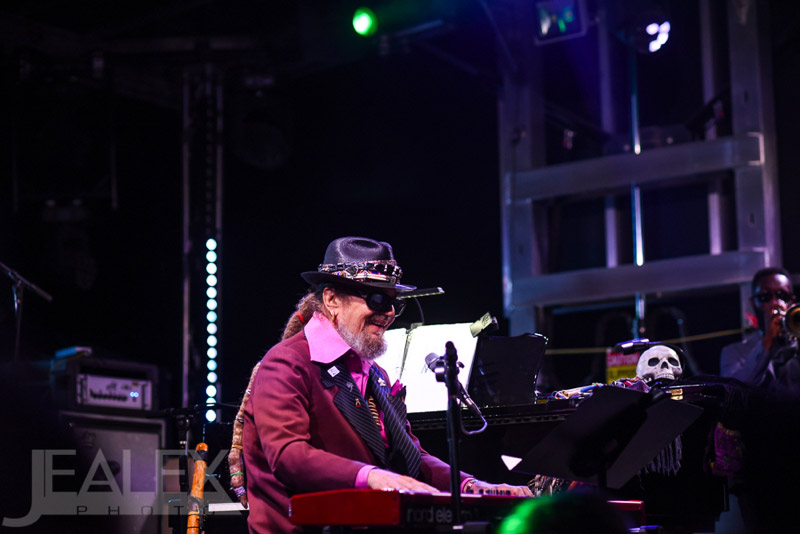 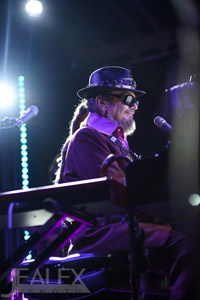 If you asked fans who they came to see at UTOPiAfest, six time Grammy Award winning, Rock and Roll Hall of Famer Dr. John would be high on the list. At 76, the New Orleans living legend laid down some boogie-woogie and blues piano that lit up the whole joint. From “Iko Iko” to “Right Place Wrong Time”. His distinctive voice and glowing smile brought all the good vibes and his Nite Trippers laid down some of the funkiest grooves that have ever penetrated the ranch. 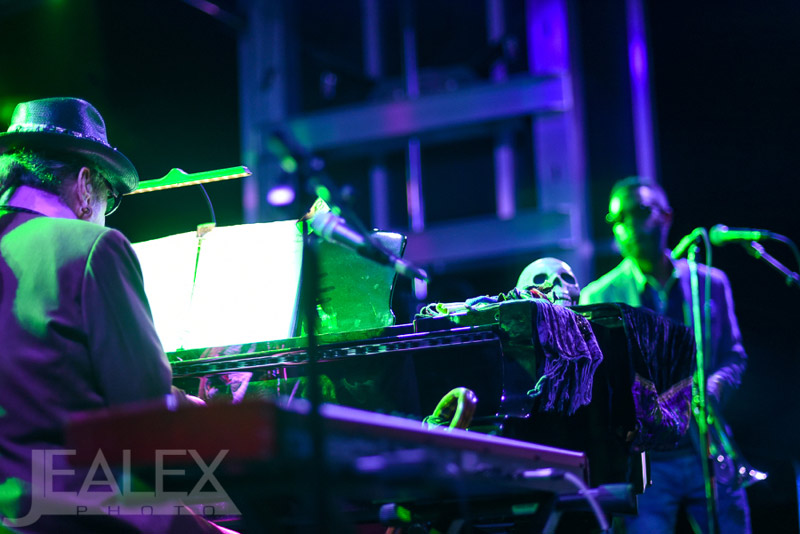 After Dr. John’s set, the crowd was instantly transported from New Orleans to Nigeria as Antibalas took the stage in support of their latest album Where the Gods Are in Peace. Founded in Brooklyn by horn player Martin Perna, the tribal afrobeat rhythm was the perfect bookend to the evening. Featuring charismatic lead singer Amayo dancing around stage with his face painted and dreadlocks wrapped up in a turban, the band put the audience in a trance before ending the night with an extended encore. While most of the audience returned to their tents, the nocturnal set grooved their way to the silent disco for Capyac, Spivey, and Wilgood. 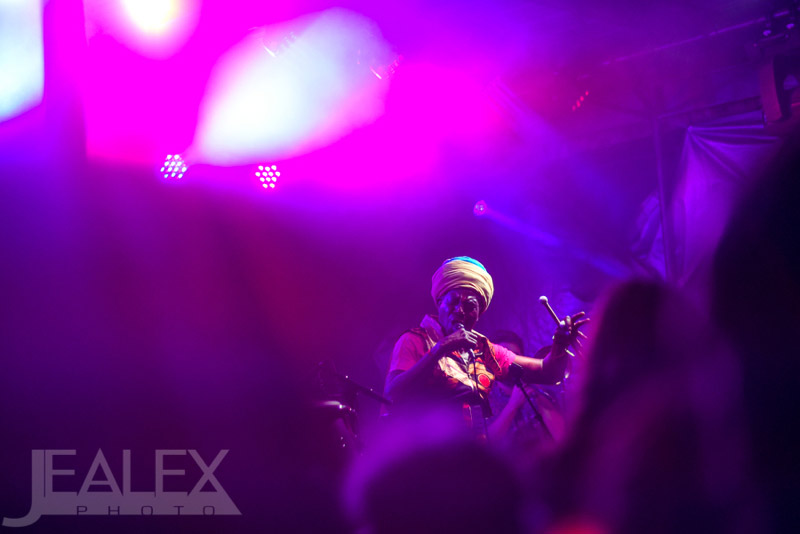 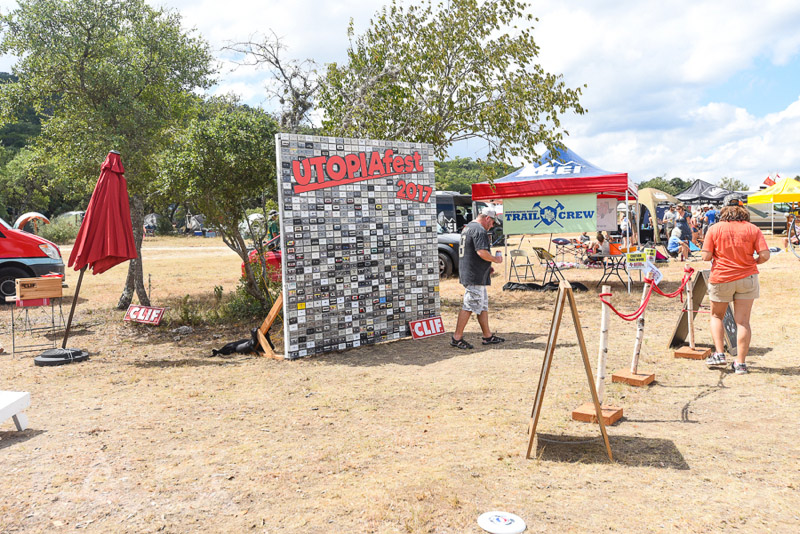 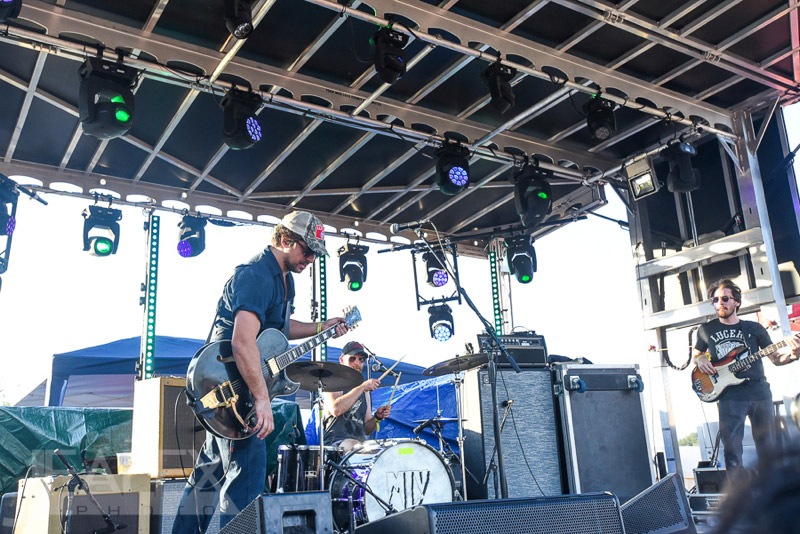 The late night silent disco and Tank Goodtimes performances had many moving slowly on Saturday morning as the perennial San Antonio Pipes & Drums bagpipe marching band paraded through the grounds. As the heat began to ramp up, festivalgoers took advantage of the hammock chill zones spread throughout the venue or just found a shady place to chill if not taking part in some of the morning activities. Sets by singer and guitarist Matthew Logan Vasquez of the band Delta Spirit, currently on hiatus, and Les Hey Babies, a colorful indie folk band from New Brunswick, Canada, took the crowd into magic hour. On day two, festival veterans know to be on the lookout for the panty drop and this year was no exception as murmurs of “keep your eyes open” for an airplane drop of festival swag spread throughout the early evening happy hour lines. 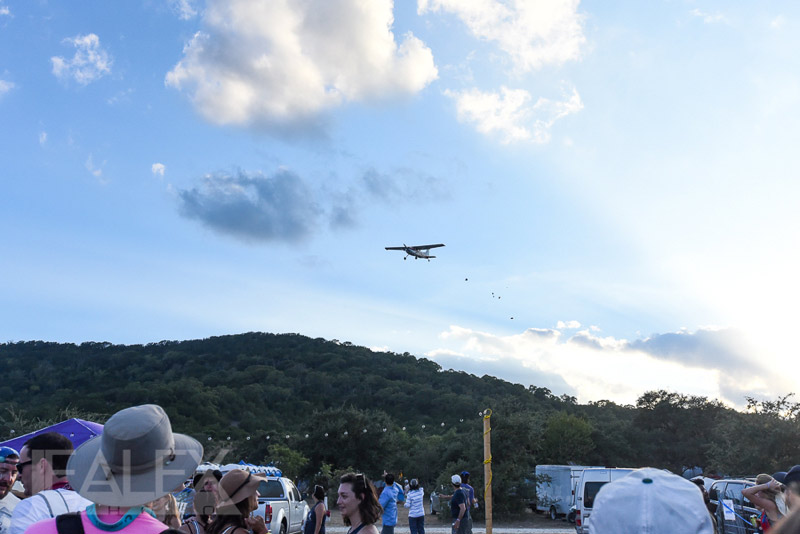 As darkness enveloped the ranch on Saturday evening, funky grooves returned in the form of Greyhounds, an Austin music duo consisting of Andrew Trube on guitar and Anthony Farrell on keyboards. Their soulful R&B tunes underscored the sadness felt after festival organizer Travis Sutherland announced that two-time Utopia Fest performer Charles Bradley had succumbed to the cancer he publicly fought over the past year. After Greyhounds performance, a large projector screen was placed in front of the Arrowhead stage that featured footage of a recorded UTOPiAfest performance of Charles Bradley & His Extraordinaires as a tribute to the deceased artist. 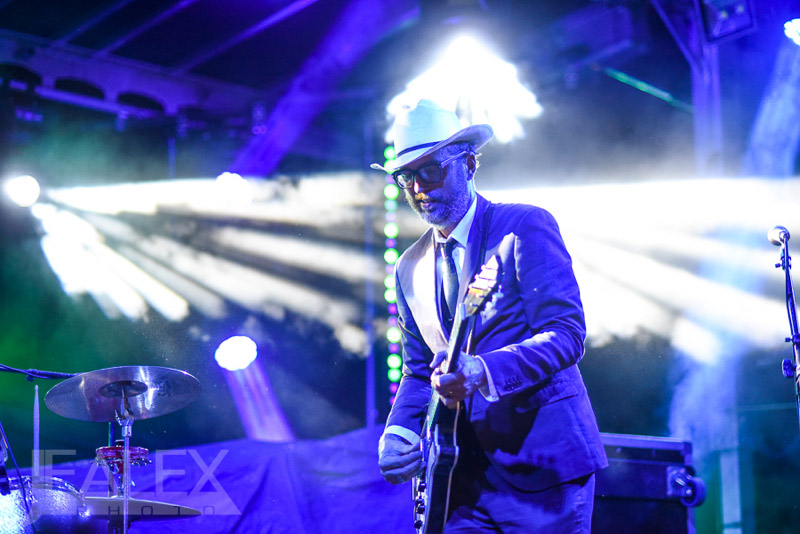 If any band on the line-up where to help lift the spirits of heartbroken fans, it was Austin’s folk pop band Wild Child. Perennial favorites, Wild Child, featuring Kelsey Wilson on vocals and violin and Alexander Beggins on vocals an ukulele, consistently connect with audiences on a deep level – at one point getting everyone to sit down through one of their songs and stopping their set for a marriage proposal. Their lyrics are catchy and bouncy and full of hope such as in “Crazy Bird” from 2013’s Runaround or “The Tale of You & Me” from 2015’s album of the same name. 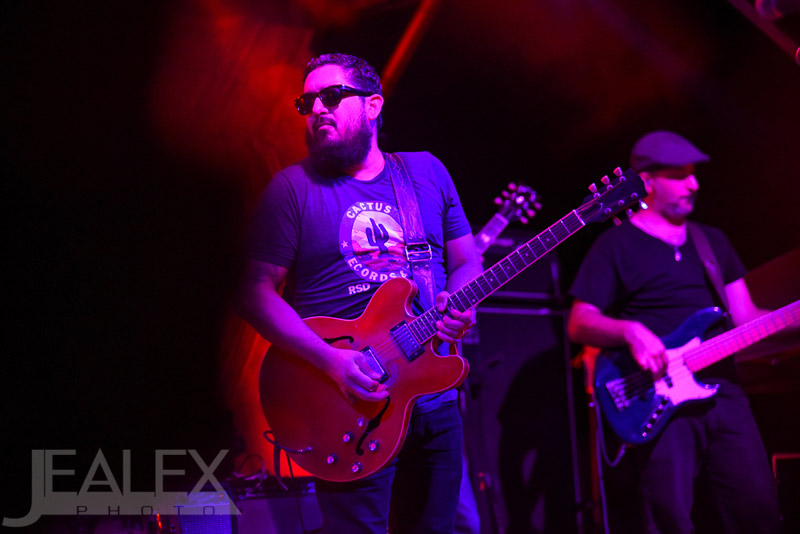 Another headlining act returning to UTOPiAfest was Brownout!, the funky side project of Grammy Award winning Latin rock band Grupo Fantasma. Featuring many of the same musicians in both bands and headed by rock and salsa guitar virtuoso Adrian Quesada, their type of groove fell on the other side of the spectrum of Saturday night’s previous acts – packing a punch with their horns and percussion that had fans boogying down into the Arrowhead stage’s plentiful sand. 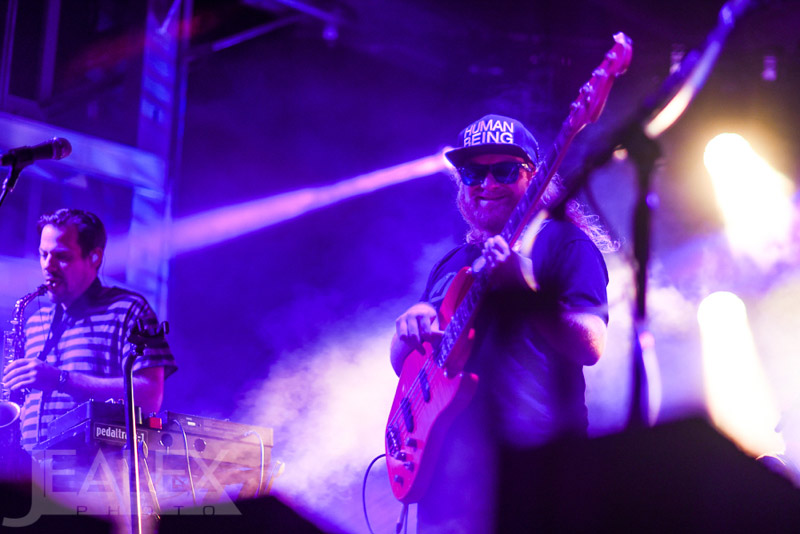 Closing out the evening was the New York-based internationally acclaimed jazz funk band Lettuce, who continued Brownout!’s grooves late into the evening. A non-stop dance party ensued that moved out to the silent disco with performances by Cloudchord and Middlespoon. 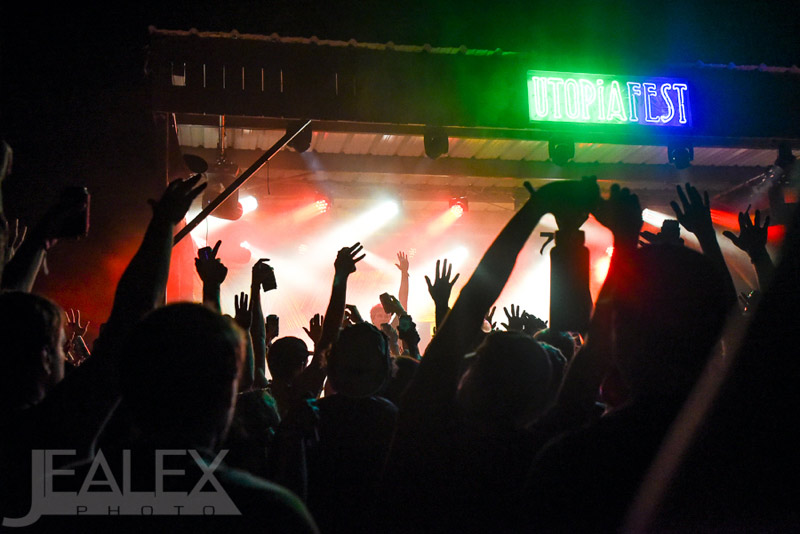 Although the lack of hip hop and EDM acts was noticeable in this iteration of UTOPiAfest, the dance vibes came from an unexpected yet impressive line-up of live instrumentation – a distinct difference from many of the festivals that have many years under their belts. Sadly, this is the last time Utopia Fest will be held at Four Sisters Ranch, but the hope is that a different venue will help the unique feel of this festival be sustainable for many years to come. 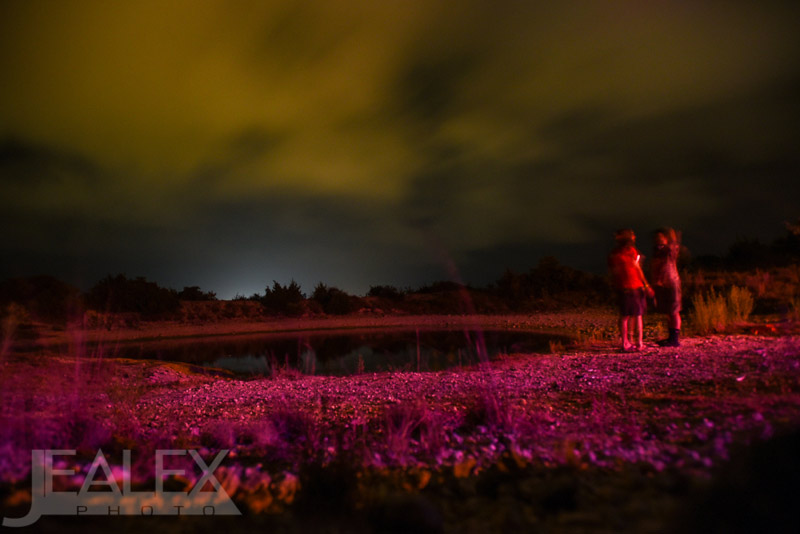