UTOPIAfest is where the gnarly Texas hill country is brought to life with art installations, organized activities, and jams to elevate the mind and warm the heart.... 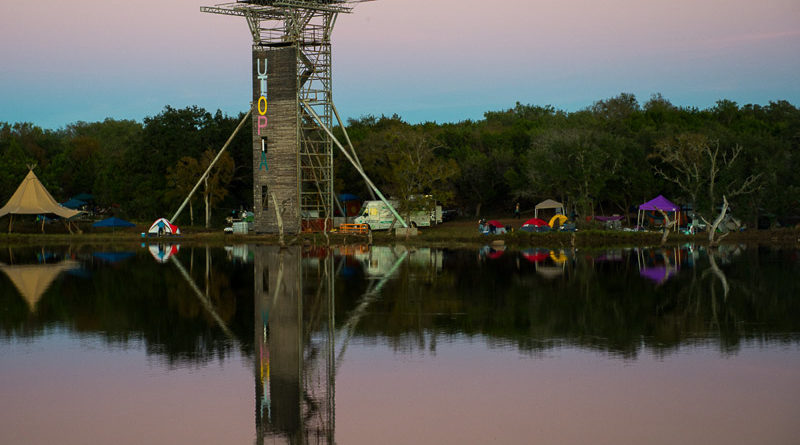 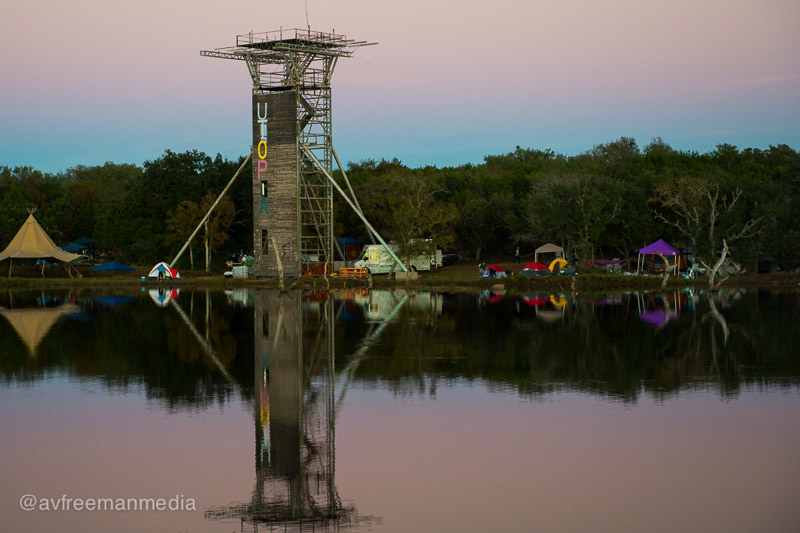 UTOPIAfest is where the gnarly Texas hill country is brought to life with art installations, organized activities, and jams to elevate the mind and warm the heart. To celebrate its tenth year, founder Travis Sutherland decided to move UTOPIAfest from his family’s Four Sisters Ranch in Utopia, Texas to an expansive 100-acre private ranch in Burnet, Texas – two hours closer to Austin. For several months Sutherland and his partners at Down in the Oaks Entertainment labored to transform the property into a premier event space only to face resistance from the local community just weeks before the picking of the first banjo. Organizers were sent scrambling for a suitable replacement location and came to an agreement with Reveille Peak Ranch just a few miles from the intended site. 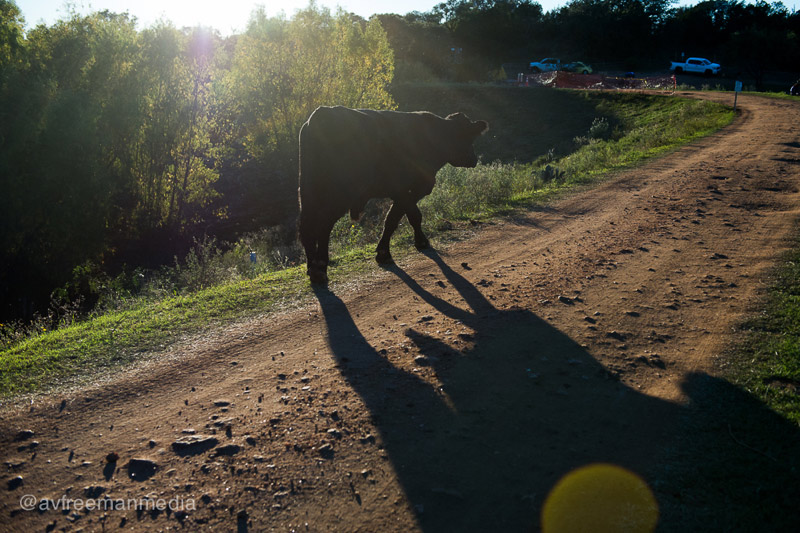 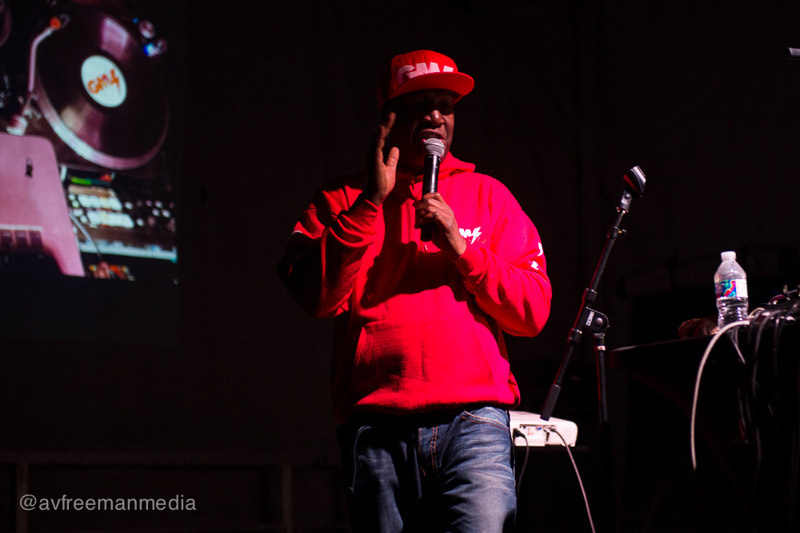 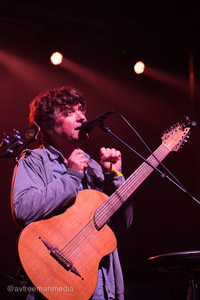 With the pre-party slated for Thursday, November 1st, organizers worked until the last minute to clear campsites and build structures on the new site that featured a lake in the middle of the footprint. Thursday’s music line-up featured the barefooted multi-instrumentalist Keller Williams who got toes taping, followed by the legendary Grandmaster Flash who got hands in the air during his recounting of the history of hip-hop. The Utopia Players, featuring members of Wild Child and Grupo Fantasma among others closed out the main stage with Latin flare. 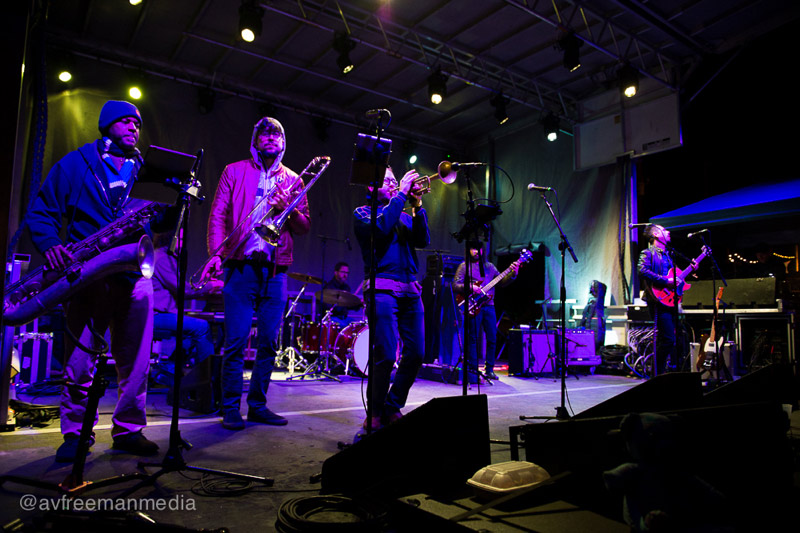 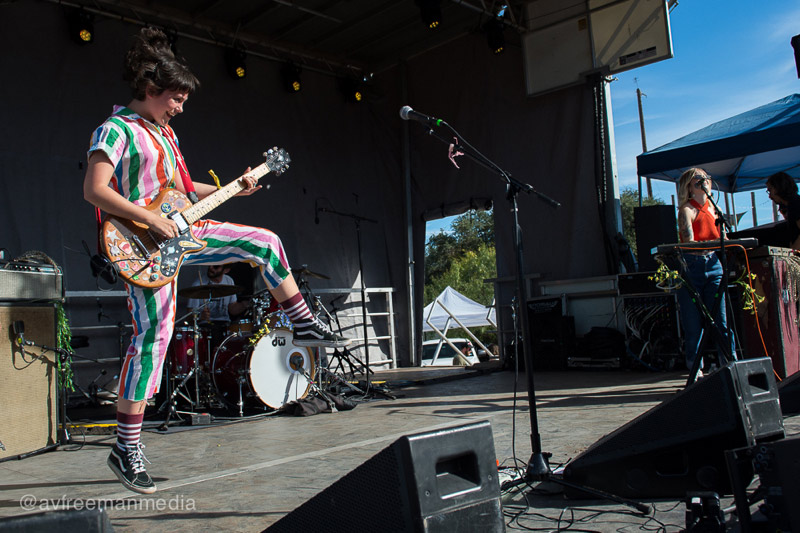 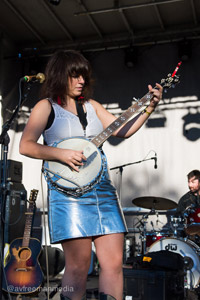 Friday proved challenging for late arriving festivalgoers, with waiting times to get through the gate extending past three hours. For those inside, the smaller Arrowhead Stage began rocking early with the indie pop of Diet Cig featuring leg kicks by vocalist/guitarist Alex Luciano. They were followed by the psychedelic soul of Kalu & The Electric Joint across the grounds at the larger Cypress Stage. Montreal singer-songwriter, Lisa LeBlanc, dressed in a silver and cowboy boots got the crowd moving with her virtuosity on the banjo – extending the instrument beyond its bluegrass roots. 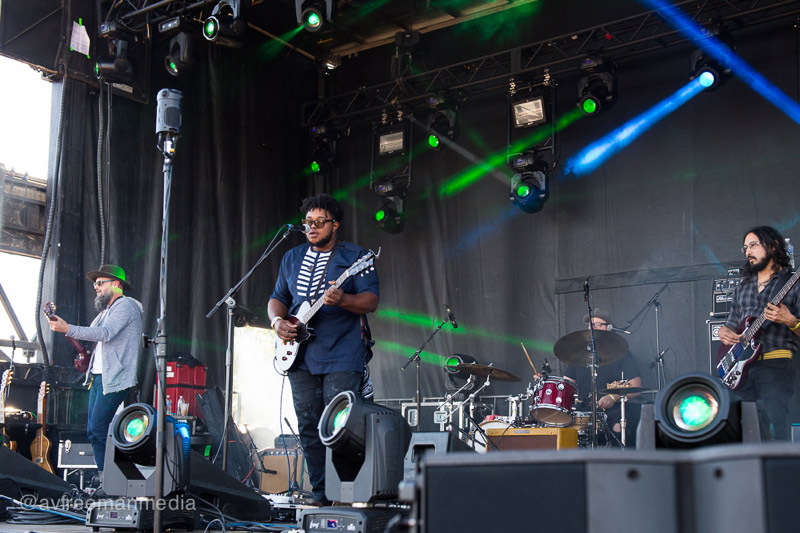 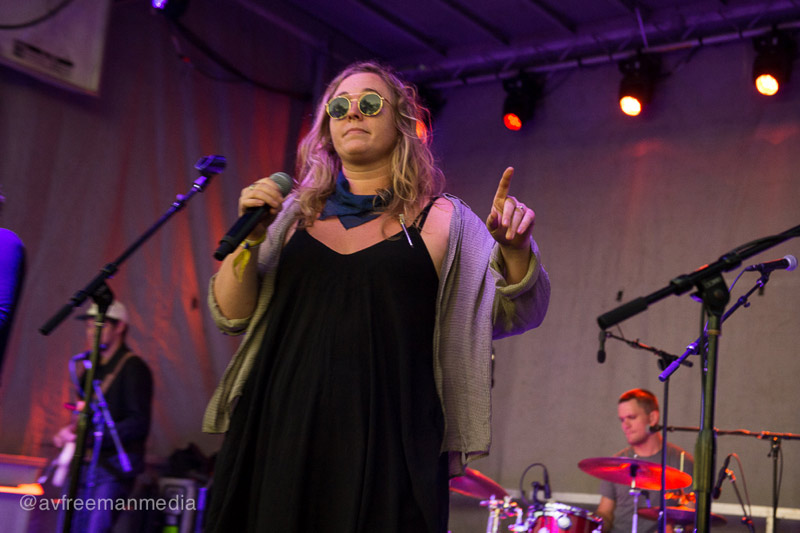 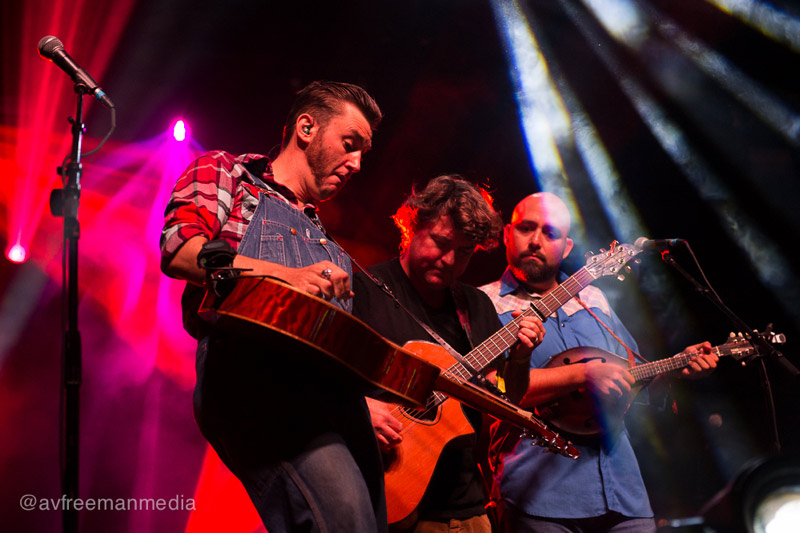 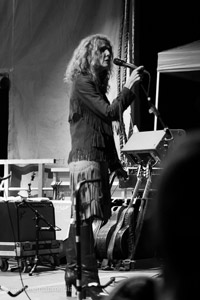 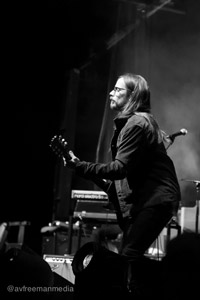 Perennial Utopians, Wild Child, took the crowd into magic hour on Friday night before turning it over to Petty Grass, a group made up of Keller Williams and the Hillbenders who reinterpreted Tom Petty tunes. Patty Griffin’s sultry smooth voice welcomed many who returned to the stages with full bellies. Willie Nelson’s son Lukas and his band Promise of the Real shredded into the night, with Nelson convulsing as he strangled the chords out of his guitar’s neck. Artsy, trumpet blasting group Rubblebucket returned to the fest in support of their latest album Sun Machine (QRO review) before The Big Ol’ Nasty Getdown, featuring members from some of the most seminal funk groups such as Kool and the Gang and P-Funk, closed out the first full day at the main stage. 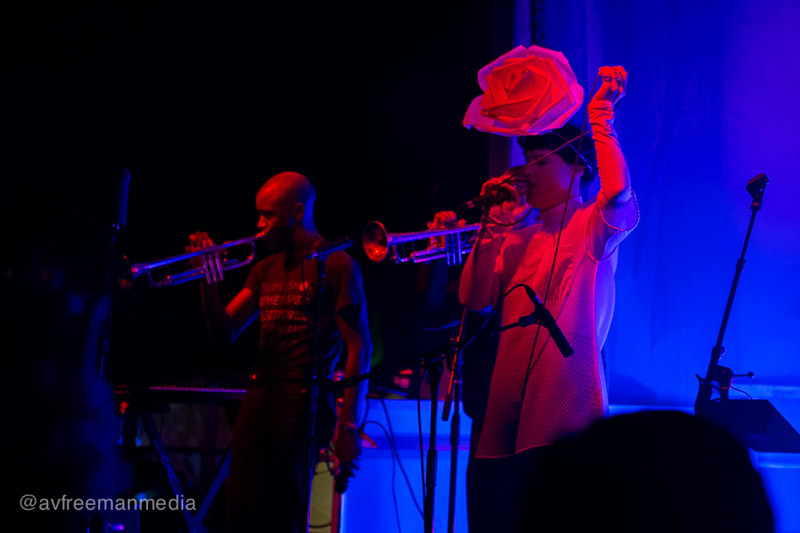 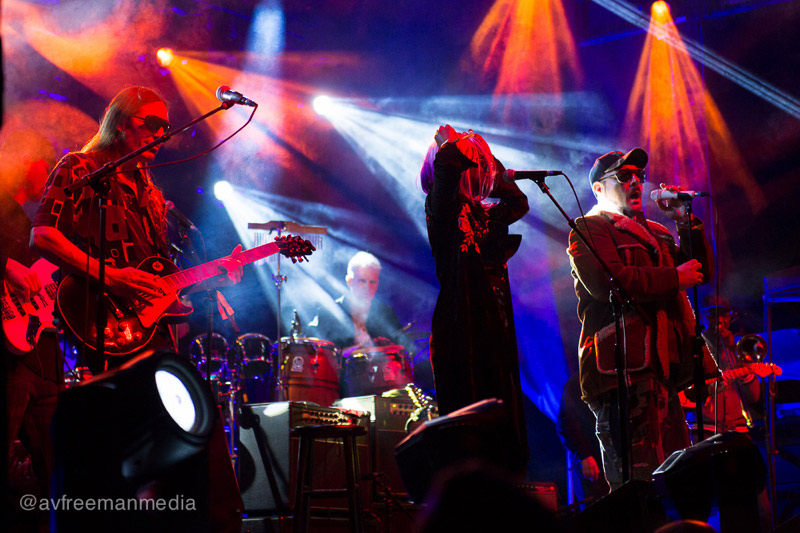 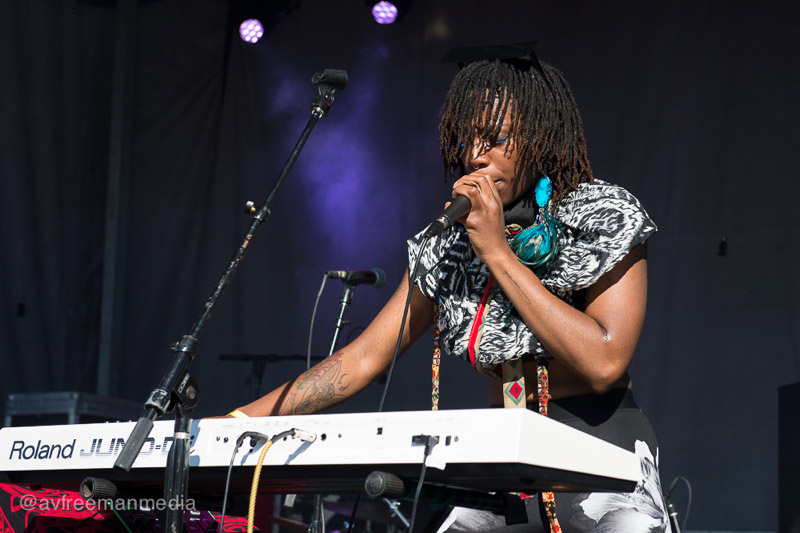 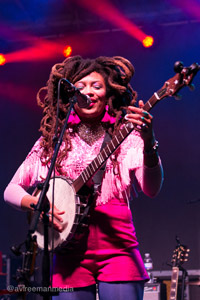 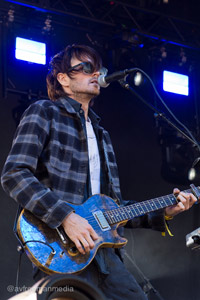 Saturday brought warmer temperatures and a looming threat of rain that seems to accompany each iteration of UTOPIAfest. Kicking off the Saturday in typical fashion were the Scottish bagpipes of the San Antonio Pipe and Drums, followed by prog rock of aptly named Progger, high energy of Trouble In the Streets, and younger Willie Nelson son Micah Nelson in the psych-folk band Particle Kid. Hard Proof returned to the fest for a late evening set on Saturday with their afro-pop grooves. A forgettable Choir!Choir!Choir! singalong punctuated mealtime with an odd Jeff Buckley-like rendition of “Hallelujah”. Memphis-based singer-songwriter Valerie June lit up the early evening with her medusa dreads, high-pitched singing, and her mix of folk, bluegrass, and Appalachian fingerpicking. 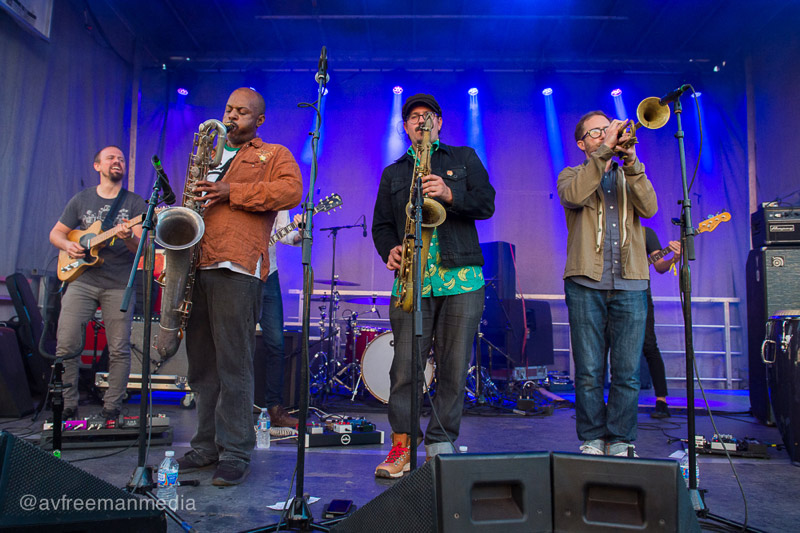 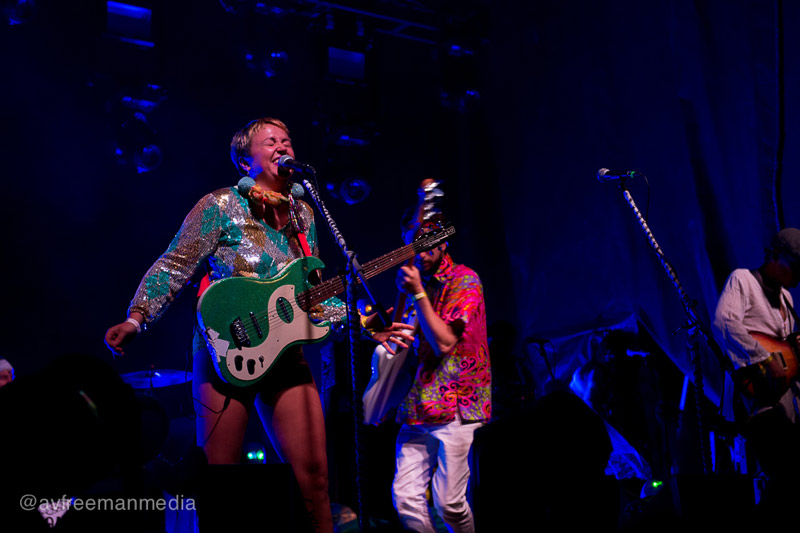 The last evening of music ended with the self-described “psychedelic party folk” of Calliope Musicals, another perennial Utopian act that features the wild stage antics of frontwoman Carrie Fussell followed by the New Orleans-tinged sounds of Medeski’s Mad Skillet. John Medeski of Medeski, Martin, and Wood trio sat down at his grand piano wearing rhinestone glasses and kicked off an avant-garde jazz session that thumped with the backbone of sousaphone master Kirk Joseph. 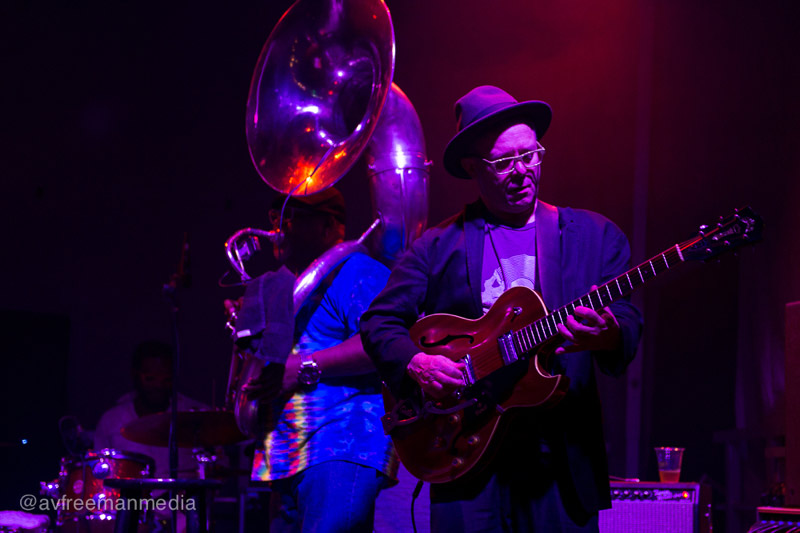 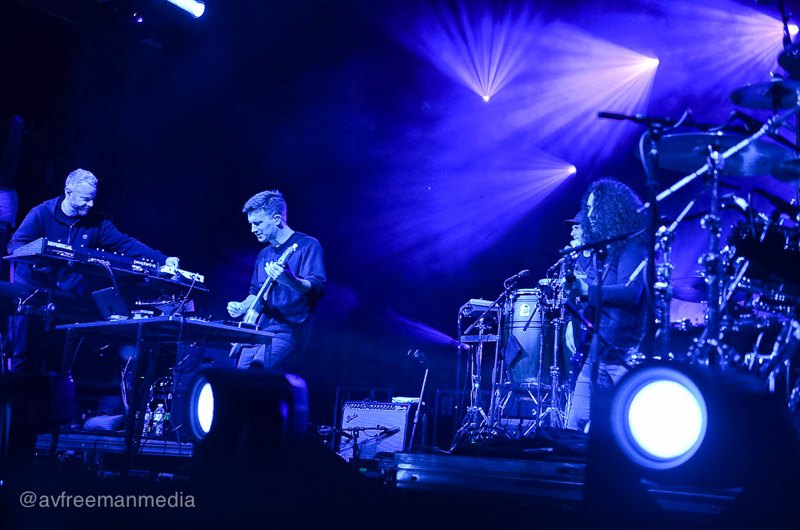 Sound Tribe Sector Nine’s (STS9) brand of electronica was a sharp contrast to the rest of UTOPIAfest’s line-up, but shared in the connecting thread of using live instruments to sooth the soul. Serving as the festival closer, they delivered a heady set that slightly suffered by the lack of their signature lighting. The thunder that was rumbling in the distance only got closer during their set with the sky dropping cold fat drops of rain, making most festivalgoers scramble for cover. After a brief shower, the clouds parted for some late-night partying at Camp Goodtimes, affectionately referred to as “Shhh Times” because of the no talking policy, that featured a dramatic performance by the Deer among others. 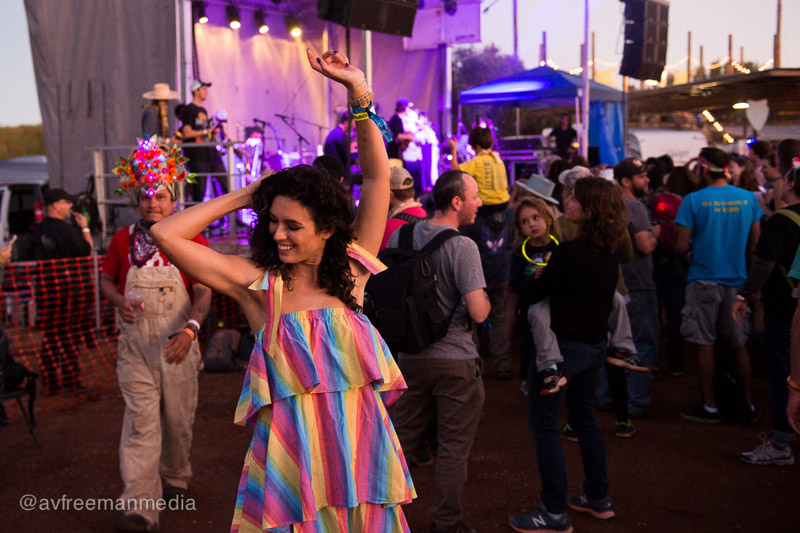 A sign with the date and ticket prices to UTOPIAfest 2019 was displayed by the merch area signaling Sutherland and team’s commitment to continuing the good vibes into an eleventh year. 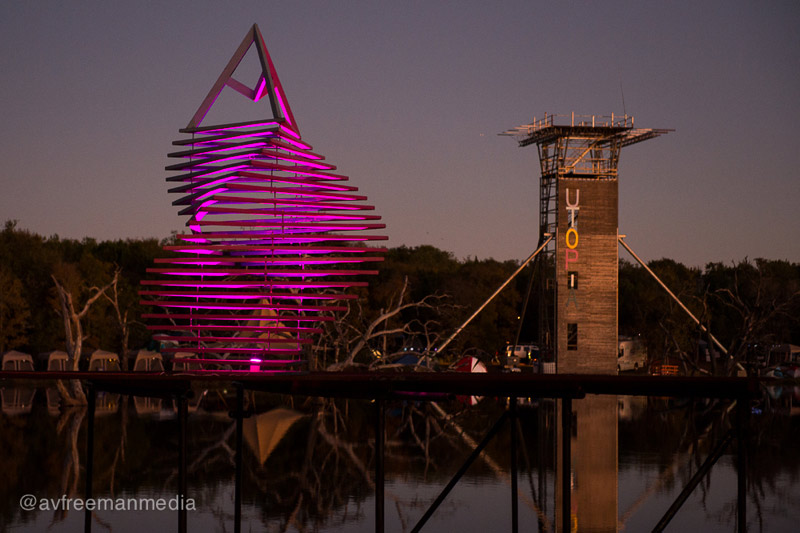