UTOPIAfest is more of an experience than merely a music festival.... 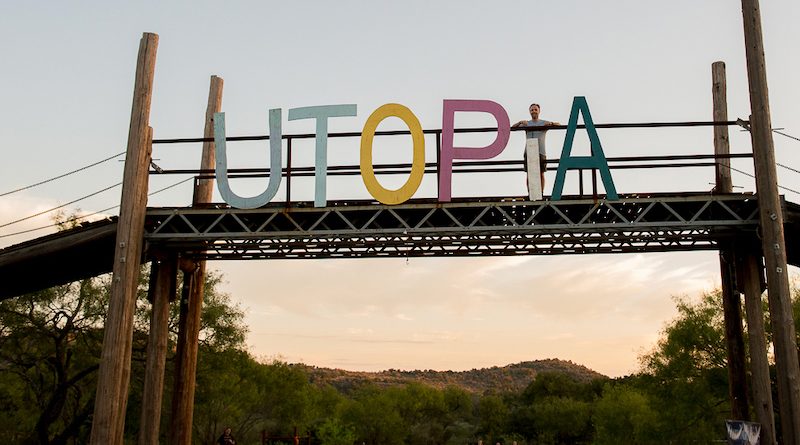 UTOPIAfest is more of an experience than merely a music festival. A community nurtured over the years under the vision of founder Travis Sutherland, Utopians converged at Reveille Peak Ranch once again in the glorious Hill Country of Texas for a 12th edition, Thursday-Saturday, October 14th-16th. Festivalgoers with their themed camps and radical attire drifted stage to stage taking in an impressive lineup of curated bands. Many returned to Reveille Peak Ranch to see each other for the first time in two years. Despite the prolonged pandemic, the desire to return to more normal before times activities like UTOPIAfest propelled 1000 Utopians to make the road trip out to the 100-acre ranch for a third year. The community, rad sounds, no fences, BYOB, and music going all night were perfect reasons to make the trek.

Thursdays at UTOPIAfest is reserved for the Pre-Party, a mellow start to the weekend while dueling Arrowhead and Real stages were built and powered. Most attendees had set up their camps and made their way down the dirt path to see the Polyrhthmics perform around 9 pm. The Seattle-based instrumental funk band seduced the crowd with their horns section and double percussionists – playing a lot of new songs they wrote during the pandemic. The night was rounded out with the UTOPIAfest Players, a perennial remix of Texas musicians featuring the country-twang boogie of the Dallas-based group, Texas Gentlemen followed by the velvet crooning of Kelsey Wilson from the indie-pop band Wild Child.

Festival-goers could choose from a few options during the day on Friday, from acoustic sets at the Black Fret Stage, group mountain bike rides, pop-up disc golf, or a smudge bundle-making workshop. The jams kicked off that afternoon with Cowboy Irie, a band featuring the festival’s founder that plays reggae versions of old country hits. They were followed by Jane Leo, an indie duo featuring Jane Ellen Bryant and Daniel Leopold of Leopold and His Fiction who brought ‘80s synth-pop vibes.

Austin-based band Madam Radar’s triple vocalists soothed the mid-afternoon crowd with their country harmonies and guitar picking – debuting songs from their upcoming new album and closing out their set with a take on the Golden Earring tune “Radar Love”. Little Rock-based deFrance with bearded picker Drew Defrance on lead guitar embodied the vibe of the fest with their rootsy long hair blues-rock. They were followed by Batty Jr., who brought the charm as the sun began to dip. Led by Zeke Jarmon on guitar and vocals, Their playful melodic songs were punctuated at one point when Zeke guided the crowd through some call and response silliness.

Bringing a rock and roll swagger on Friday evening was Wimberley, Texas-based musician Matthew Logan Vasquez. The frontman for Delta Spirit’s guitar playing was top notch – his range was incredible, even stopping to play his guitar with his teeth during one song. Balancing out the guitar focused rock of the festival was Trouble in the Streets, whose sound has matured over the years. Led by Nnedi Nebula Agbaroji on keys and vocals, their self-described style of electro tribe moved the crowd especially during their rendition of Rage Against the Machine’s “Bulls on Parade” where Agbaroji shouted to the crowd, “Texas, get your hands off my body.”

Kelsey Wilson is a regular at UTOPIAfest but this time she dropped the folksy ukulele sounds of Wild Child for the soulful R & B project Sir Woman. In just a couple of years, the singer has invented a new persona that feels fresh and highlights her amazing vocal range. Fans of former UTOPIAfest headliner STS9 were treated to the similar grooves of Austin-based electronic hip hop soul producer Vincent Antone who closed out Friday night. Their wobbles were the perfect gateway to the Silent Disco that kicked off with house DJ Mixer Rogers and ran into the wee hours of the night.

The mid October placement of the festival  was a blessing to the concert goers as the weather was dry and pleasant – a departure from previous iterations at the ranch in November that featured bitterly cold evenings. Saturday kicked off in traditional fashion with the San Antonio Pipes and Drums marching across the grounds. Most folks stayed at their campsites well into the afternoon with the crowd slowly trickling in for Medicine Man Revival’s set. The Kiete Young fronted band featured soulful R & B and gospel vocals along with his wild dance moves. Another festival perennial was Henry Invisible, the one man multi-instrumentalist funk entertainer that recently signed to Bootsy Collins’ recording project Funk Garage. Henry lit up the afternoon with his beaming smile and infectious grooves.

Mikaela Davis returned with her harp in tow for another year at UTOPIAfest for a late afternoon set. The 29-year-old New Yorker was joined on stage by Southern Star, a backing band that complimented her classically trained harp playing with steel guitar and Western vibes. They played melodic pop melodies from their 2018 album Delivery, which feature the singer’s powerful vocals and teased some new material from an upcoming album.

As dusk took hold on Saturday, fans shuffled from Mikaela Davis to the next stage to hear the frenetic energy of Tephra Sound. The jazz funk trio was mind blowing with Helenn Gillett on electric cello, Brian Haas on Rhodes piano, and Nikki Glaspie on drums. Their set at times featured danceable grooves contrasted by complex passages that felt like the score to a dramatic arthouse film. Another festival favorite, Shinyribs took the stage as the evening reached its peak. Lead singer, Kevin Russel was decked out in suit with emerald sequined loafers. He wore an LED lighted robe, as he shuffled across the stage belting out his Gulf Coast country-soul swamp-funk complete with horn section and back-up singers.

The 12th UTOPIAfest saw the return of the art pop New York band Rubblebucket as headliners. They have built quite a following in the Austin area over the years and served to drive ticket sales. Lead band members Annakalmia Traver and Alex Toth have a great way of engaging with the audience with their playful horn focused tunes. The beauty of UTOPIAfest is how it fosters connections between attendees and the bands and Rubblebucket embodied this idea by jumping off the stage to form a conga line through a joyous crowd as their set closed out the large stage lineup.

Utopians don’t have to wait long for another opportunity to be outside and with each other as UTOPIAfest’s Sweet Party family reunion camp out returns in April 2022 to the original location of Four Sisters Ranch in Utopia, Texas.