It’s kind of ironic how indie bands, in their cool pursuit to be uncool, have, in fact, become cool. And there, we find Vampire Weekend.... 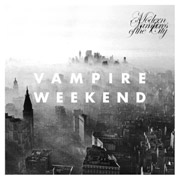 It’s kind of ironic how indie bands, in their cool pursuit to be uncool, have, in fact, become cool.  And there, we find Vampire Weekend.  They have clearly hit their stride on their third and most recent album, Modern Vampires of the City, which exhibits their willingness to explore new territory and even do funky things with vocals (see “Diane Young”).

They are only three albums into their career, they just appeared on Saturday Night Live (for the third time), and they have already had a rabble of festival appearances this summer.  In short, they appear to be on top of the world.  The big question is when will they be considered sellouts?  If you yourself are not already sure, go to the nearest hole-in-the-wall record store and ask the clerk if Vampire Weekend is still cool.  He or she is bound to know without a doubt.

Click here for photos of Vampire Weekend at 2018 Lollapalooza in Chicago, IL in the QRO Concert Photo Gallery

Click here for photos of Vampire Weekend at 2014 Governors Ball in New York, NY in the QRO Concert Photo Gallery

All that to say, this is a great album.  In fact, it’s a safe bet it will be one of the top twenty of the year for many publications.  Keep your eye out for that.  Most of the songs are interesting in individual ways.  Take “Ya Hey” for instance.  It is the longest track on the album, clocking in at just over five minutes, and is yet another track on which they clearly had a fun time manipulating lead singer Ezra Koenig’s vocals.

The song “Everlasting Arms” is another noteworthy contribution to the overall flow of Modern Vampires of the City.  It invites interpretation with lyrics like, “I was born to live without you / But I’m never going to understand,” and as we all know (hopefully), what makes a truly great album is catchy and well-crafted songs coupled with meaningful lyrics.  By the way, there is crazy vocal manipulation on this song too.  Perhaps they challenged themselves to see how many songs they could sneak that onto while still making them sound good.

So there you have it.  Modern Vampires of the City is a cool album.  It has New York City on the cover and just sounds like what many probably think New York City sounds like.  Although, it probably works just as well in other cities too.