<img src="http://www.qromag.com/wp-content/uploads/2010/01/vampireweekendcontra.jpg" alt=" " />The follow up to one of the most blogged over, hyped up and successful debuts ever released in the 21st century music scene. ... 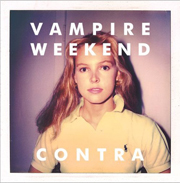 The modern day rock star job description states that, one must look, sound and act like ridiculous, pretentious caricatures of themselves, at all times.  Some have a deep, rudimentary understanding of this way of life, and succumb to tabloid wishes by refusing to drive unless thoroughly intoxicated, and living by the maxim of, “This ain’t a party until I get kicked out of the club for either engaging in a vicious brawl, or being in possession of class A narcotics.”  Others, like many self-proclaimed rappers, were born ludicrous and so arrogant that they had to become famous and widely revered, to avoid imploding in a blaze of impotent self-hatred.

Enter Vampire Weekend: a New York quartet who completely contradict the aforementioned rock star ideals of addiction, self-absorption and lunacy.  Instead of fast cars and cocaine, the members of Vampire Weekend commute on bicycles and indulge in gourmet French cuisine.  Instead of diamond-encrusted jewellery that probably cost more than the average consumer’s yearly income, Vampire Weekend prefers loafers and pastel sweaters.  And instead of songs about drugs and promiscuous sex, Vampire Weekend sings about punctuation, classical architecture, higher education and post-modern society.  But their debut record has reached gold status, their photo has adorned numerous international music magazines, and the band has performed at some of the most prestigious locations in the world.  So without a doubt, the boys of Vampire Weekend are as much rock stars as any cocaine snorting, fast-car driving, attention-seeking deadbeat.

Ask any band and they will tell you that their second album is always steeped in scepticism and incredulity.  It seems to be an unspeakable curse that the second record should often be a disappointment and merely a hurdle to get to album number three and beyond.  A few daring artists have attempted to leap from debut to third album, but unfortunately they realised a second album is inevitable, and avoiding it is about as easy as unbending a corkscrew via telekinesis.  Though The John Butler Trio ingeniously found a way of avoiding the second album debacle, by entitling their sophomore release Three= – the album went platinum.

Now Vampire Weekend’s Contra not only suffers from second album syndrome, but also has to deal with being a follow up to one of the most blogged-over, hyped-up and successful debuts ever released in the 21st century music scene.  After such an incredible first album, the expectation surrounding Vampire Weekend’s second release was suffocating – the public were expecting something great, and if Vampire Weekend did not deliver at least an equally admirable second release, they faced industry pariah-dom.  Most other bands would have been slightly derailed by the hype accompanying their eponymous debut and the sheer weight of expectation and pressure heaped onto their second album.  But it’s quite clear by now that Vampire Weekend is not most other bands, and that they play by their own set of rules.  And if anyone can overcome the aged curse of the sophomore slump, then Ezra Koenig and his band of educated over-achievers most certainly can.

Contra is a more mature, more diverse and simply more substantial album (despite clocking in at 36 minutes) that shows an emotional depth not present on the band’s debut.  The opening run of songs is characterized by a soft and wide-eyed melodic gracefulness.  “Horchata” harnesses a gentle calypso beat to evoke a nostalgic reverie.  Front man and lyricist Ezra Koenig rhymes horchata (which is a Mexican beverage) with balaclava, Aranciata and then Masada.  “White Sky” is a multi-textured Afro-pop joy – a stirring homage to the Manhattan skyline, surpassing any other musical intricacies found on their debut.  Yet all albums have their low points and on Contra it is tracks three and four.  “Holiday”, a rather mainstream ska-pop workout attempts to re-capture the light-hearted vigour of numbers such as “M79” and “A-Punk,” but without the customary élan.  And “California English”, the band’s ironic approach to auto-tune, ends up being a sonic farce, which is confusing, irritating and entirely skippable.  But on the whole Contra delivers.  It will surely please Vampire Weekend fans, but will probably not turn naysayers into believers.

Because of its eclecticism, the appeal of Contra is relatively limited to a small group of listeners.  People who enjoy music that has lyrics that may require a dictionary to decipher; music that features rhythms from around the world – in short, Vampire Weekend appeals to an audience of intelligent, cultured and possibly affluent individuals.  So if one tried to introduce Vampire Weekend to, say a classic rock or hip-hop fan, it would be similar to attempting to explain existential beliefs to a born-again Christian.

What Mr. Koenig really has strived to achieve with Contra is the respect of cynics and sceptics who unfairly dismissed Vampire Weekend’s eponymous debut as a over-ambitious imitation of Paul Simon’s Graceland, penned by a crew of post-collegiates far too convinced that they’re clever and quirky, with a presumably superficial understanding of the African sounds they were stealing.  The band’s preppy smugness undoubtedly rubbed many people the wrong way.  But instead of trying to live it down, Vampire Weekend quite wisely chose instead to live it up.

Vampire Weekend seem more prepared this time around.  Yes their tracks are still imbued with Afro-Pop rhythms, but with Contra these tribal beats meld seamlessly with Rostam Batmanglij’s synthesizers and guitar lines, and sound right at home.  Instead of using African music as a gimmick to sound different from the status quo, the band uses the rhythms to enhance and enrich their songs.  Filled with new ideas, yet altogether familiar at the same time, Contra is no radical leap in any new direction, but rather a calculated step towards a maturity and precision that only comes with time.

Vampire Weekend is the thinking man’s band.  Koenig writes lyrics that would serve him very well in a game of Scrabble – they would be cloying if not sung with such relish.  And Vampire Weekend is the rich man’s band.  With music videos that are often mistaken for Ralph Lauren commercials, Vampire Weekend wear their affluence and privilege on their sleeve, and though often delving into the pretentiousness and self-parody, they do not attempt to conceal their Ivy League smugness (which one supposes is commendable).  Vampire Weekend is also the cultured man’s band – drawing influence from African tribal rhythms, Mexican Mariachi beats, and Caribbean grooves.  And you see, this is why Vampire Weekend is so good.  They play what they know, and do it so well.  Yes they are smart, rich and privileged white boys, but they don’t try to hide it.

There will always be haters and cynics, but based on the success, both critical and commercial, of their first two albums, there doesn’t appear to be a tangible limit to what future splendour the boys of Vampire Weekend may achieve.