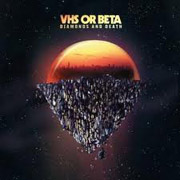 Louisville’s VHS or Beta went big in sound after they signed with famed EMI electro-dance imprint, Astralwerks – for worse on the somewhat shallow Night On Fire, but for better with follow-up Bring On the Comets (QRO review).  However, after that 2007 release & touring, the group went away for a while, save for occasional DJ sets.  2011 has seen the group finally return, with a stripped-down line-up and sound for Diamonds & Death.

Whereas VHS or Beta was once a four-piece with a fifth touring member, for Diamonds & Death the group slimmed down to just singer/guitarist Craig Pfunder and bassist Mark Palgy (QRO interview).  Their instrumentation slimmed down as well, mostly to just vocals & electronic keys, the heart of dancetronica.  Unfortunately, for too much of Diamonds, the duo fail to grow upon that base, and in today’s saturated electro-dance scene, it makes for songs that are good, but hardly standouts.  There is some inflection, like the eighties nighttime, with wa-wa, of “Everybody”, but the finest tracks are biggest: opener/single “Breaking Bones”, which grows, and the penultimate “Eyes”, that is more reaching & evocative.

After all the time away, shifting down from major to indie label, and from four-plus members to two (they tour as a four-piece ?), VHS or Beta were bound to reduce their sound and style.  Hopefully their greater ambition will return, as they’ve got the skills to back it up.