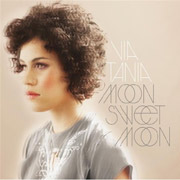 Tania Bowers (a.k.a. Via Tania – QRO interview) may have moved from her native Australia to Chicago all the way back in 2005, but her first record since the move, 2007’s Moon Sweet Moon, is only now getting a release in her new home, two years after coming out Down Under.  Chilly Chi-town seems a better fit for Bowers’ stripped chills, but there’s an intimacy on Moon that is all Tania.

Click here for photos of Via Tania at CMJ 2009 in New York, NY in the QRO Concert Photo Gallery

Enchanting opener "The Beginning" introduces Bowers well, but it’s the relaxed, sweet rhythm & nice sound to "Our Wild Flight" that maybe most stands out.  Harmonies abound on Moon, most notably in Bowers’ own voice, but she plays it close-up and intimate – yet even when she strips down on pieces such as "How Come" or closer "Home", there’s a haunt effect that sets her apart & above most singer/songwriter alt-folk.  Sometimes she can get a little too close, like on "Everyworld" and the following "February", but more Via Tania is always welcome.

And Bowers doesn’t have to strip down to get noticed.  The dark, more rhythmic groove of "Lost In It", or the sustain & carry to "Dangerously" both provoke interest, though the synth-beat atmospherics of "Light Years" and more pressing forward & outward to the prior "Fields" (the one new track from the Australian release; also a different track listing) don’t quite reach as high.

America has loved its Aussie imports since Crocodile Dundee, and Via Tania & Moon Sweet Moon deserves that kind of love.