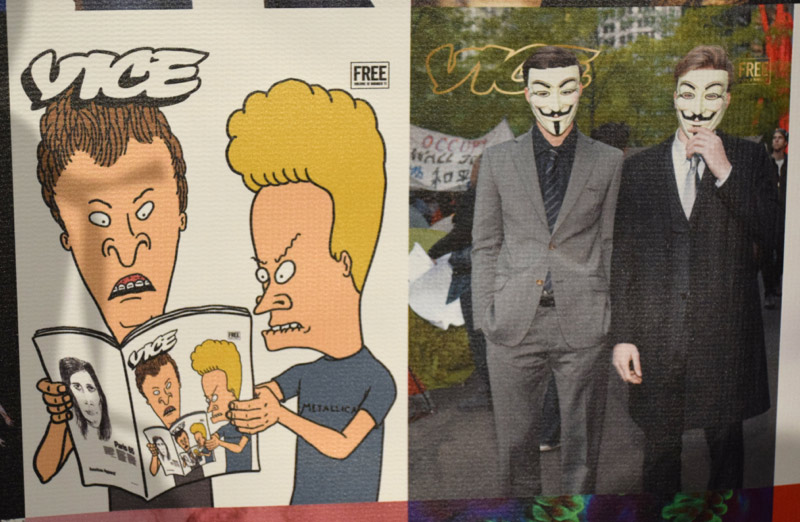 The media industry is dying – or is it booming? The same day that legendary centenary-celebrating magazine The New Republic saw scandalous resignations and infighting (as reported by used-to-be-in-print Newsweek), VICE Magazine celebrated its twentieth anniversary with a star-studded affair, Friday December 5th at Duggal Greenhouse in Brooklyn Navy Yards. 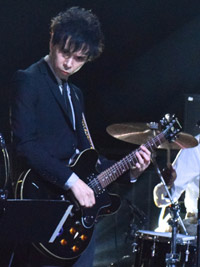 The event had been rumored for a while, and preceded by an anniversary party in VICE’s original home of Canada, but what really brought it to everyone’s attention was when Nick Zinner of the Yeah Yeah Yeahs posted a tweet the day before showing the super-group line-up – the house band included him & Andrew Wyatt of Miike Snow, with singers likes Jarvis Cocker (solo & of nineties Brit-Pop greats Pulp), Stephen Malkmus (solo & of nineties alt-greats Pavement), YYYs’ Karen O, Andrew W.K., Damien Abraham (Fucked Up), plus rappers such as Action Bronson, Ghostface Killah, Lil’ Wayne, and Raekwon, and bands like The Black Lips, Chromeo, and Pussy Riot. Was this an accidental leak by Zinner, or intentional from VICE to drum up interest? Whatever the reason, it suddenly became the hot ticket.

But things didn’t start out so hot. Primary reason for this was something even VICE couldn’t control, the rain (though you’d think a publication born in Canada would know enough not to start its existence in December…). The event was held by the water, leading to a tramp through the puddles of Dumbo to stand on line watching people try to argue that they were too important to stand on line. Things finally sped up when the two unoccupied guest lines were finally opened to the RSVP winners and press/staff – only to find that one had to take a shuttle bus to the actual spot, three blocks away (the shuttle bus was actually pretty nice, in a leather party bus way – and your correspondent made the mistake of trying to walk it rather than wait for the next bus, and of course made a wrong turn…). At least there were tents over the areas for port-a-potties, smoking, and food trucks when you got there.

Most importantly, there were some really long open bars for all of those in attendance. Of course they were mobbed early on (the event was billed as starting at nine with music beginning at ten – music actually began at eleven), which only meant that everyone was going to get multiple drinks for themselves and friends, making the bar lines take even that much longer. However, later on when the music started, things did ease up. And the food truck food was free, too – while the truck with the longest line actually had some underwhelming food, the one with falafel sandwiches was the best (and had the biggest portions). 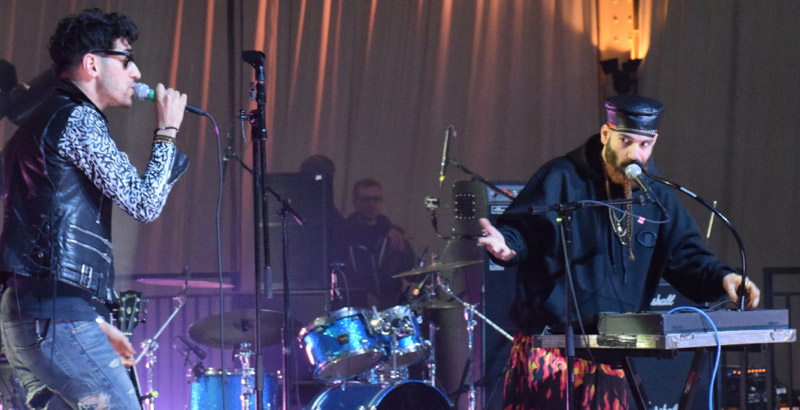 But New York City has lots of events with free food & drinks (after waiting on line at some place you’d never go to otherwise) – what made the VICE event stand out was the music line-up. For most of the night, Nick Zinner & co. served as backing band to a variety of singers (though there were just DJs for some rappers, and a few bands played themselves). Opening things up was never-saw-a-party-he-didn’t-like Andrew W.K. playing his magnum opus, “Party Hard”, followed by Chromeo doing up “Needy Girl”, which they released on VICE Records a decade ago.

Yet the night was mostly about covers – with some choice exceptions. Because one supergroup isn’t enough, there was not only also a metal supergroup (including Dave Ellefson of Megadeth and Alex Skolnick of Testament) doing Metallica’s “Seek and Destroy”, but also a punk supergroup (including Damian Abraham of Fucked Up and John Joseph of QRO Mag favorites Cro-Mags) doing a punk medley, with Action Bronson rapping & smoking in between. But probably the best cover of the night was from actor Jonah Hill (with director Spike Jonze on guitar) doing Drake’s “Marvin’s Room” (while the actual Drake squabbled with Diddy down in Miami days later).

Not every musical choice was pitch perfect. The-Dream were a mite too soon on the soon-to-be-big chart compared with most of the other performers, while their cover, M.I.A.’s “Paper Airplanes”, was of someone a little too long ago on the used-to-be-hip chart. Ghostface Killah and Raekwon doing classic “Daytona 500” was great but not really a surprise compared to Hill-as-Drake, and you know that Black Lips got on the bill because they’re on VICE Records (not that they didn’t give it their all on stage like always). 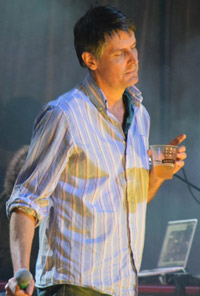 But just as things simmered down, the night got some politics in a way that actually kind of worked. Meredith Graves of Perfect Pussy introduced her cover of The Strokes’ infamous “New York Cops” by saying that black lives matter – but was followed up by Stephen Malkmus singing Pavement’s “Range Life” as the old man singing for a paycheck (but still dissed even older Stone Temple Pilots & Smashing Pumpkins like always); still a great song, and Malkmus (with Paul Banks of Interpol on guitar) stayed on to randomly do The Black Crowes’ “Remedy” (reading the lyrics off his smartphone). 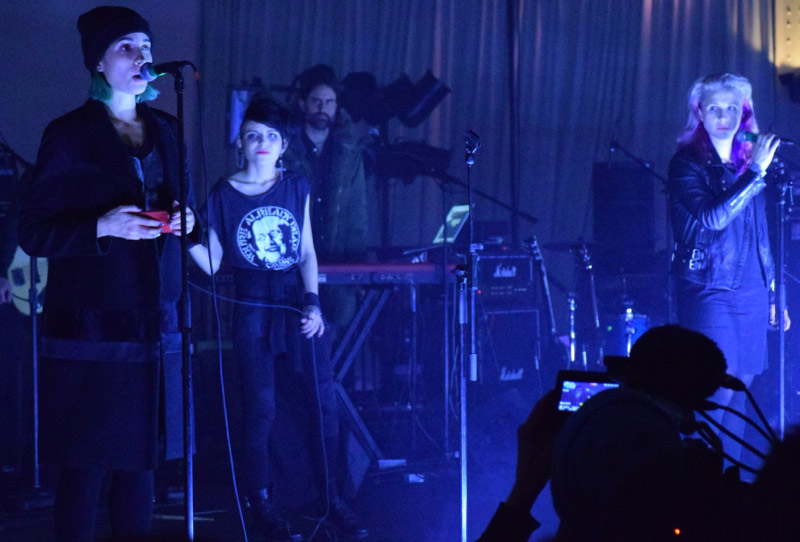 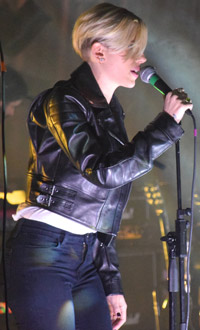 The big surprise wasn’t the rumor of in-town-for-Saturday Night Live Nicki Minaj, but rather Scarlett Johansson doing New Order’s “Bizarre Love Triangle”; relatively stripped down a straightforward of a song that often isn’t done that way, the surprise and the performance went over very well. And that buzz carried into an appearance – and actual performance – by Russia’s famed protest punks Pussy Riot, doing a fitting version of Le Tigre’s “Deceptacon” (and referencing those protesting across the country that night over recent grand jury verdicts). The pure best song of the night was Zinner’s band doing one of his own songs, Yeah Yeah Yeahs’ breakthrough “Maps” with Karen O herself on vocals, sounding just as vital now as when it came out. 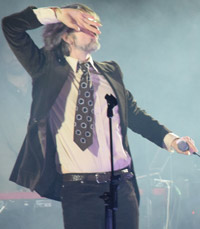 Jarvis Cocker managed to not fall in that shadow by not doing a Pulp song of his, but rather a great and quite unexpected old cover, Sham 69’s “If the Kids Are United”, which sounded just as important now as it did then. The live music ended with Lil’ Wayne, maybe not the best pick in terms of relevancy or acclaim, but gets all the sympathy points by bouncing back from severe illness a couple of years ago only to see his Carter V get caught up in label issues with Cash Money Records.

Of course there was a huge clusterfuck anywhere near the stage, but like at the bars it thinned out a bit later on [so your correspondent got up close to see crushes Scarlet Johansson & Stephen Malkmus…], and they even started serving beers in bottles rather than pouring them out (meaning that you could stuff bottles in your back pocket along with cans for the rest of the weekend/rest of the night/trip home…). And of course there was some super-VIP area where the leading lights could look down upon the hoi polloi enjoying their bread and circuses (the VIP section was a balcony behind the stage, which did kind of rub it in that, after getting access to this invite-only super-event, you still weren’t that special…).

VICE has grown up in the past two decades, from shock value drug stories to their own Emmy-winning HBO series including on-the-ground Arab Spring reporting (plus they still do some shock value drug stories). The 20th Anniversary Party admittedly wasn’t really about their current hard-hitting nature but more about their hard-partying history – and being an actually successful media business.