{Awayland} may come as a surprise to Villagers’ fans.... 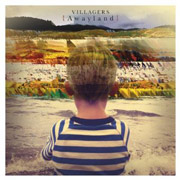 {Awayland} may come as a surprise to Villagers’ fans.  It’s a peculiar, surprising assortment of songs, that doesn’t fit in the box one thinks of when thinking of Villagers.  It’s not folk exactly; it’s Technicolor and electric.  It’s full of complex soundscapes; yet it continues to maintain the same thoughtful, lyrical story-telling qualities of Becoming a Jackal.

The tone of {Awayland} is often playful, including lyrics such as “sitting on a toilet with a toothbrush in his mouth” and “from the fat, fat cat to the destitute.”  Yet there is an undertone of distress, even mourning in O’Brien’s powerful vocals, that manages to evoke both joy and sorrow in one breath.

Click here for photos of Villagers at {Awayland} release party at Manhattan Inn in Brooklyn, NY on April 11th, 2013 in the QRO Concert Photo Gallery

You might not love this album the first time you listen to it.  These songs demand quiet attention – or that you get up and dance to them.  It’s not musical wallpaper.  However, if you really listen, you may be surprised by what you hear.  He’s placed beautiful little nuggets between songs you might miss if you don’t listen with headphones.  While don’t think it is a binaural recording, it sounds as though it could be.  The album is a journey, a story that comes together when listened to from beginning to end.  Each song undergoes a metamorphosis every time you listen to it.

“My Lighthouse” opens the album with delicate finger picking and O’Brien’s soulful harmonies.  Dreamy and atmospheric musically, but lyrically, it is very much in the here and now.  It seems a wooing love song of friendship that ends with a dark, questioning note, which fades into silence followed by a long pause that lingers before the gleeful maraca shaking of “Earthly Pleasure” begins.

There’s a pulsing throughout “Earthly Pleasure” that brings to mind the swirling spin of water in the porcelain throne and that moment of satisfaction after you flush and watch it swirl down the drain.  Then you’re left staring at the empty bowl.  Perhaps that only comes to mind because of how the song begins: “Naked on a toilet with a toothbrush in his mouth…”

“It’s about cracking up and loosing your mind,” explained O’Brien of “Earthly Pleasure”.  “And that’s okay.  It’s okay to crack up sometimes.”

With a new affinity of Dr. Carl Sagan, O’Brien watched Cosmos while writing it.  What began a nine minute epic, he whittled down into a jovial, adventurous, compact exploration of time travel and metaphysical reality that ends with a tribute to Earthly Pleasure:

Earthly Pleasure, ring out!
From the caverns of my soul
Now I truly understand
That I don’t understand a thing
So let this earthly pleasure sing.

With a Morse-code-like blinking or warning bleeps, “The Waves” reels you in slowly and O’Brien sings softly to you as if whispering a lullaby.  Slowly, it builds with an odd salsa rhythm and well-engineered soundscape.  It threatens with sirens and warnings and sweeping orchestration all playing and warring with one another.  The space, time and placement of each piece allows the listener to hear all of the highs and lows as O’Brien sings of innocence, chance and evolution in what can only be a futile attempt to explain the bigotry and ignorance that surrounds us in this modern world.  With lyrics like “And if you don’t agree / You’d better get back inside your cave / ‘Cos we’re all dancing with the waves up in the diamond sky / Stronger than you and I,” he seems to be alluding to Plato’s ‘Allegory of the Cave’ as well as many other things.  As always, he has a knack for turning a song on its head.

The single, “Nothing Arrived”, seems a testament to a sinking relationship and the pleading and promises that occur before that ‘final end’.  The melodies and rhythm of it gently rollicking one along the journey until it reaches its climax with the infamous howls found at the end of “Becoming a Jackal” almost erupting, but held back, restrained as he sings, “My dear sweat nothing, let’s start anew / From here on end, it’s just me and you / I waited for something and something died / It’s a funny battle, it’s a constant game / I guess I was busy when nothing came / I guess I was busy / Oh, oh, ohhhhhh…”

Pure, orchestral rock, “The Bell” begins with a thunderous swirl of music, drums, hard-hitting organ, and some sort of twirling sound that repeats itself throughout in the right ear.  “The Bell” ends with the organ ringing in your ear, yes – just one.  The sound reverberating in your head melds into the first note of the instrumental title track of the album “{Awayland}”.

“Passing a Message” is playful and funky.  It explodes in a cacophony of instruments as if your heart might explode with the absurdity of it all.  It ends with what sounds like an old Atari video game, which blends and segues into “Grateful Song”, which begins slow and mournfully and then builds into a choral explosion of thankfulness, drums and symbols crashing at the end to leave a ringing in the ear that perfectly matches the piano notes beginning “In a Newfound Land You Are Free”.  After the peppy ragtime number, “Rhythm Composer”, which brings to mind The Avalanches’ “Since I Left You”, the album concludes with an ass braying and the sound of a vinyl platter coming to its end.

O’Brien told QRO, {Awayland} as “a joyful creature, a bed of roses and a slap in the face.”

He explained that instead of creating music to support the lyrics, he wanted to create a more lighthearted album full of soundscapes governed by the music.  He wanted to create a musical space where live audiences could move around, dance, get sweaty, and enjoy themselves.

After two and a half years of touring and performing Becoming a Jackal, he found he couldn’t write songs on the guitar anymore; so he returned to how he originally created music when he was twelve years old: tinkering with samplers and synthesizers, specifically the Roland SP-404 x.  Allowing himself to be playful gave him a way to overcome his writer’s block, to draw again on imagination and wonder, and to create a musical world filled with both joy and sorrow.

Originally entitled ‘Birth’, {Awayland} is an explosive departure from his dark and brooding, Mercury-nominated, Ivor-Novello-Award-winning album Becoming a Jackal.  In any case, it should at least end comparisons of Conor O’Brien to Conor Oberst.

Even after attempting to play this album into the ground, have not succeeded.  An early pick for Best Album of 2013!

O’Brien offers the album to the world with a personal note:

So I sit down at my desk with a blank sheet of paper, a headful of ferrys and a small collection of half-written songs and all I want to do is to stretch my imagination as far as it can go.  I sure as hell don’t want to lose any intimacy in the music, but I need to take this intimacy into a more vibrant place.  The furrowed-brow vocal seriousness which I used to engage with has no place here.

And the musicianship is better than ever.  My fellow bandmates make the songs sound as beautiful as they could possibly be.  It’s a diverse album.  It takes you on a trip through a musical landscape, as a tribute to your sense of wonder.  It travels through space and time and leaves you back for dinner.  It might take a few gobbles.  Maybe try it on headphones first, without interruption.  I hope you enjoy.