Day Three of Voodoo Experience was lighter in attendance than Friday and Saturday.... Day Three of Voodoo Experience was lighter in attendance than Friday and Saturday, offering Sunday’s crowd closer views of acts such as Canadian Rocker Bob Moses, Georgia electro-rockers STS9, EDM festival favorites Gramatik, and New York DJ duo The Chainsmokers. Sunday also had two of the most impressive theatrics of the entire festival with Puscifer literally holding wrestling matches on stage and a belly dancer from Beats Antique symbolically slaying a 20-foot-tall dragon. Arcade Fire closed out the fest with their emotionally moving tunes putting a nice ribbon on a weekend of great music in NOLA. 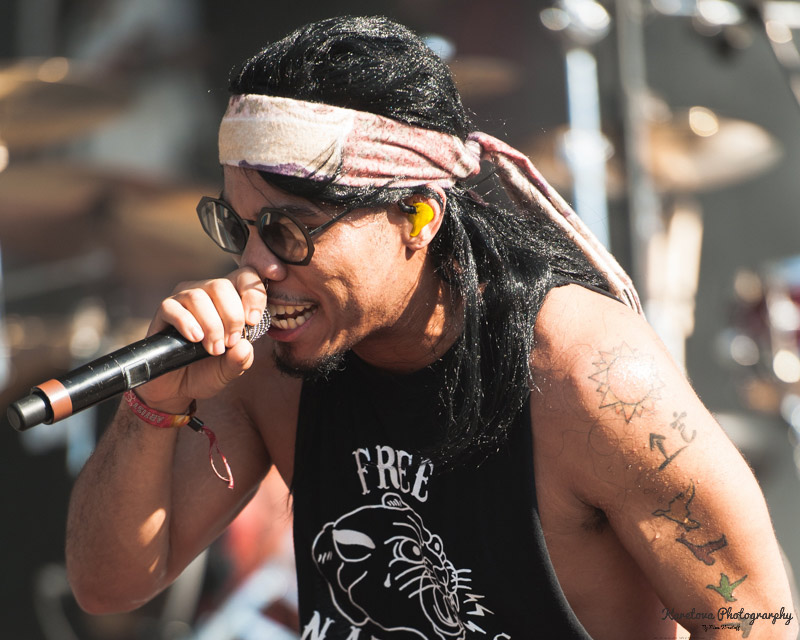 Ever since getting his break on Dr. Dre’s album Compton last year, Anderson .Paak’s star has been rising, and with a slew of festivals under their belt in 2016, Anderson .Paak & The Free Nationals delivered one of the top performances of Voodoo Experience. Rushing onto the stage to Guns and Roses’ “Welcome to the Jungle”, wearing a long black wig and bandana, .Paak kicked off the groves with “Come Down” from this year’s Malibu then drifting into “Milk and Honey” from 2014’s Venice. .Paak then jumped onto the drum kit for “Put Me Thru”, showing off his skills as a drummer in addition to his rapping skills. Several times throughout the set, he stopped to chat with the audience. At one point telling the crowd to, “Turn to your neighbor and kiss their cheek.” Sunday’s performance also saw .Paak perform “Glowed Up”, a song with KAYTRANADA on 99.9%. Although the crowd was noticeably smaller on Day Three, they were turnt up. At one point, .Paak said it was their third show in a row on their Halloween tour and even though he was tired, the audience brought him back to life. 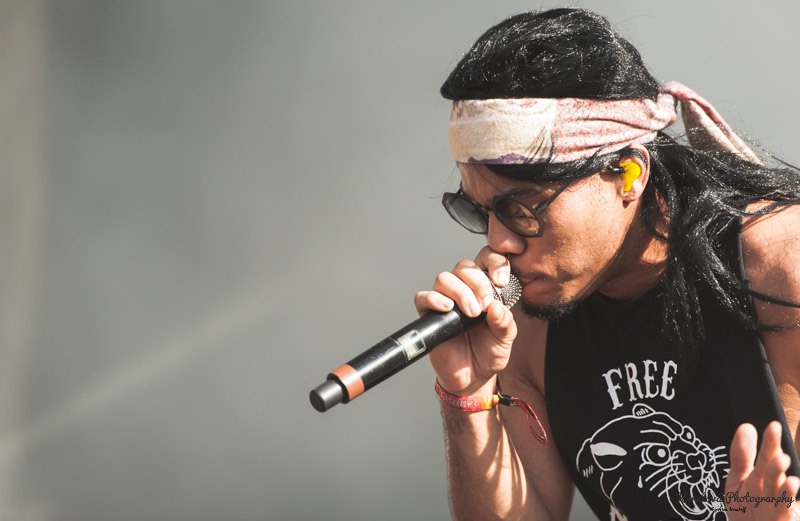 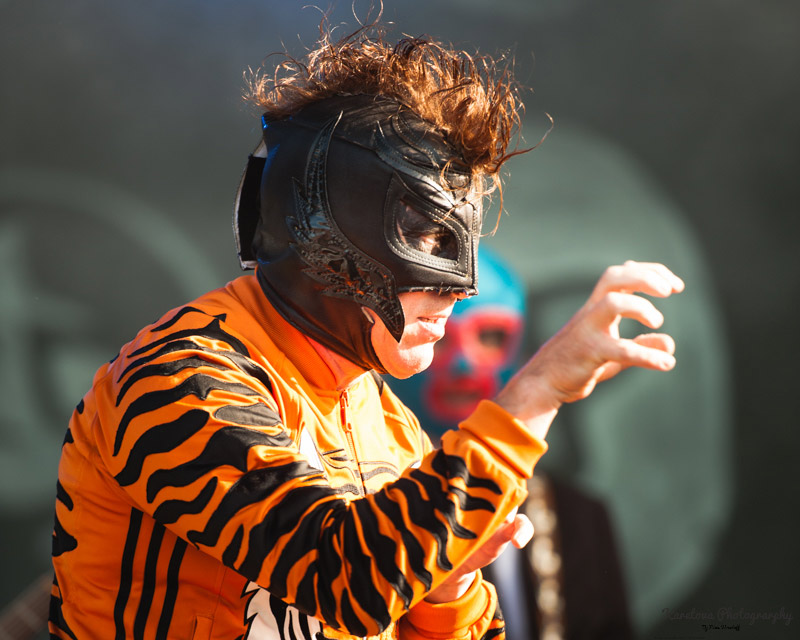 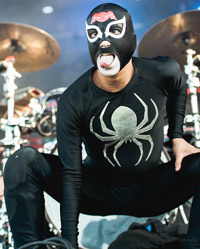 Shrouded in mystery on Saturday night at Tool wearing paramilitary tactical gear at the rear of a dimly lit stage, Maynard James Keenon’s late Sunday afternoon performance on the Pepsi Stage with Puscifer brought him out into the light, albeit still concealing most of his face behind a mask and his body in a tiger stripped onesie. The alt rock band Puscifer is a sharp contrast to Keenan’s work in Tool, with more melodic passages and less musical virtuosity, making the set work well in the waning afternoon sun. Puscifer had perhaps the most elaborate stage design of the weekend, as everyone on stage donned Mexican wrestler outfits with elaborate masks and a truncated wrestling ring erected at the rear of the stage. Puscifer performed songs of their latest release Money Shot such as “The Remedy” with lyrics, “You speak like someone who has never been smacked in the fucking mouth,” while actual wrestling was happening in the ring – a nice touch of theatricality that was missing from Ghost’s set the night before. 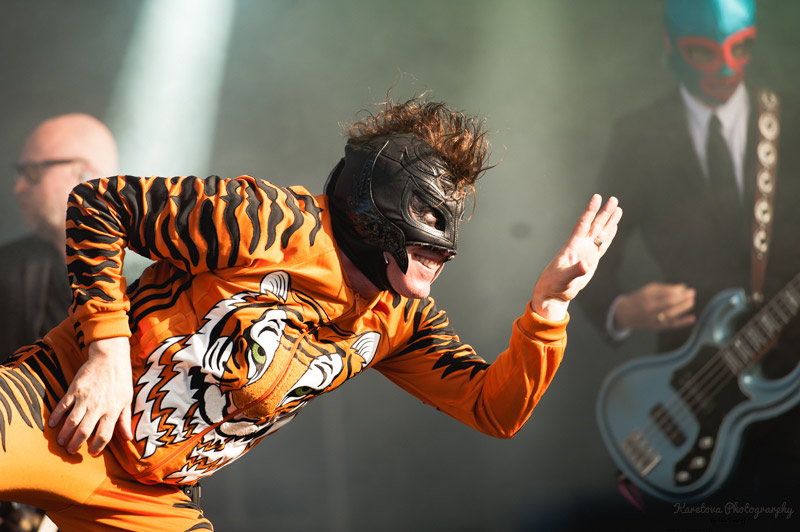 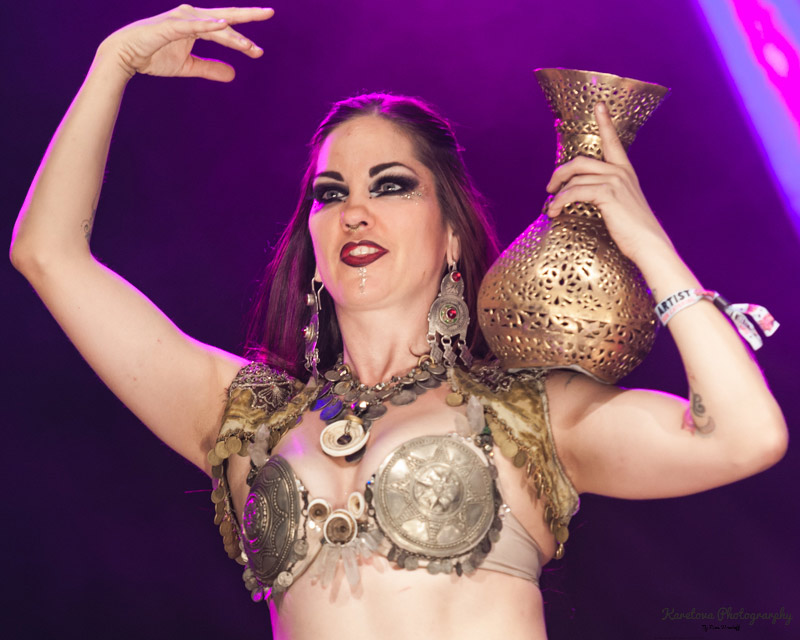 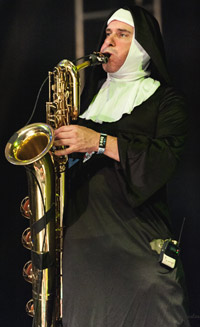 Oakland-based experimental world fusion group Beats Antique brought another elaborate stage performance to Voodoo Fest’s Pepsi Stage – notable for the group of exotic belly dancers led by the lovely Zoey Jakes and accompanied by the talented instrumentalist David Satori and Tommy Cappel on percussion and strings. With “Egyptic” from 2010’s Blind Threshold and “Beauty Beats” from 2008’s Collide, the group turned some folks in the audience not familiar with their work into instant fans. While Satori and Cappel were dressed as nuns and set back on the stage, Jakes stole the show with her belly dancing, vase balancing, and percussion playing. During the third song of their set, Jakes was joined by three other belly dancers at the front of the stage to create a drum line for one of their newest songs, “Three Sisters” off of this year’s Shadowbox. The lighting and theatrics made the entire set really enjoyable to watch, especially with added touches like when one of the belly dancers took out a large cutlass and slayed an inflatable dragon that took up nearly the whole stage. 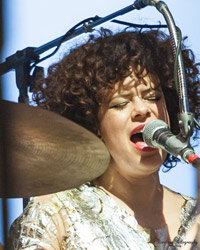 With reports of a New Orleans house party on Saturday night that featured Arcade Fire performing new material, many in the crowd were eager to hear what new songs the band was going to perform. While none of the 19 songs played were new tunes on the final night of Voodoo Experience, the crowd was not disappointed as the 13 musicians played an inspired emotional set of material almost equally divided between Funeral, Reflektor (QRO review), The Suburbs (QRO review), and Neon Bible (QRO review). Dressed in his signature white on white attire, Win Butler took the stage with guitar in hand to perform “Ready to Start” followed by “Suburbs” on piano and “Sprawl II” with wife Regine Chassagne on vocals. What seemed like a cavernous stage to most acts, the Altar Stage was the perfect size for a band with over a dozen musicians – giving plenty of space for multi-instrumentalists Chassagne and the Butler brothers Win & Will to move around. The well-received set was punctuated by Win stopping to make political comments on local issues such as “BP paid one-tenth of what they fuck they should have” and “fuck private prisons.” He also had some words of advice for those conflicted with the current presidential nominees, explaining that “Intervention” was written when George Bush was in office and even though he wasn’t inspired by the candidate at the time, he voted for Al Gore anyway. Despite these charged political statements, a sense of harmony permeated the festival especially as they closed out their set with “Wake Up” from 2004’s Funeral with the fans singing along as they headed for the exit gates one final time.