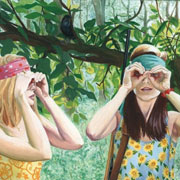 Walter Schreifels is best known being the frontman of post-hardcore NY-based band Rival Schools (QRO photos), but he is much more than that.  Something of an artistic shape shifter, Schreifels has once again come up with a magical musical indie-pop masterpiece that is an instant classic, showing what a multifaceted talented man he is.

Schreifels, who has become one of the most predominant artists and writers immerging from the ‘90s NY hardcore scene (also Gorilla Biscuits, Quicksand, Youth of Today), has in recent years made a return to the more acoustic sounds, and regardless of the number of pretty awful albums which have come out in the last number of years trying to break the mainstream, An Open Letter To the Scene is a prime example of how acoustic pop can act well, and without effort, as truly personal statement.

An Open Letter To the Scene is a heartfelt album, and with honest lyrics and playful melodies teamed with a real sense of sincerity, Schreifels has again hit the nail on the head.  Sweetly, starting off with an upbeat tribute, "Arthur Lee’s Lullaby", the record continues to go from strength to strength, keeping each track fresh with it’s own captivating sound.  Artists such as Elvis Costello, The Kinks, and The Smiths have been noted amongst his influences, and this can be heard with future sing-a-long classics such as "She Is To Me" and "Wild Pandas".

Although the album does include moments of true tongue in cheek – "The Ballad of Lil’ Kim" – An Open Letter seems to reflect Schreifels’ own personality, more so than any other record he’s released.  He describes himself on his MySpace as a "singer, songwriter and all around good guy", and it really couldn’t be more accurate.  There is something magnetic about Schreifels and his music – with many of the bands he has been involved in reaching critical acclaim.

This latest offering from Walter Schreifels also includes some songs that many longtime fans of his have been waiting for.  A cover of Agnostic Front’s anthem "Society Suckers" is included on the album, his version so far removed from the original – but again with the added Walter Charm.  After years of only being able to access a rough version of this song on YouTube and bad rips, this is a real treat for those who want a different take on a hardcore classic.  The album also includes "Gotta Prove It", a song originally written for nineties hardcore-mainstream act CIV.

It’s still clear to see the line of musical decadency through Walter Schreifels’ work, and it can only get better.  Luckily, Schreifels has already stated that he wants to release yet another solo album this year, as well as an extensive European tour, and a new Rival Schools album is due out in July on Photofinish/Atlantic.  Thicker and faster – the world is ready!