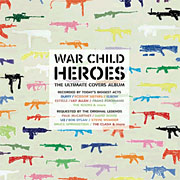 It’s become a full-blown tradition for War Child, a UK charity dedicated to helping children afflicted by war, to put together a compilation album to raise funds.  And when they do, they get the absolute biggest names in British music to contribute, making for some of the most compelling charity efforts ever.  War Child’s fourth album, Heroes, is unique from its predecessors in that all-time legends of music (British and non-) were asked to pick a song of their and a current artist to cover it.  This made for a pretty amazing tracklist.

The album kicks off with an American combination: Beck covering Bob Dylan’s "Leopard-Skin Pill-Box Hat" with a fuzzy, rocking twist.  Other American combinations include Rufus Wainwright’s touching version of Brian Wilson’s "Wonderful", The Hold Steady lively take on Bruce Springsteen’s "Atlantic City", and the all-New York effort of "Sheena Is a Punk Rocker" originally by The Ramones found here by the Yeah Yeah Yeahs.

Heroes biggest strength, musically, may be in the relative calmness found throughout the covers.  Slow, sweeping movements can be found dotted all around the album, and sophistication you’d expect from the coverees naturally dominated.  Being a goddaughter of The Clash’s late Joe Strummer, Lily Allen was joined by surviving member Mick Jones on a cover of "Straight To Hell", on a charmingly tender version.  Duffy’s cover of McCartney’s "Live and Let Die" is nothing but soulful, followed by Elbow’s slow-building U2 tribute on "Running to Stand Still".

Some of the more interesting moments come from electronic enhancements, but Franz Ferdinand’s live version of Blondie’s "Call Me" is guitar-pop at its finest.  TV On the Radio does an excellent job modernizing former collaborator David Bowie’s classic "Heroes", and Hot Chip cleverly gives Joy Division’s "Transmission" a bouncier light-heartedness.

Fifteen cover tracks (sixteen in North America) comprise Heroes, and while some stand out from others, all of the songs are special.  The musicians doing the nominating and the ones doing the covering all did excellent jobs, and Heroes is easily worth the purchase, especially because it’s for a good cause.