<img src="http://www.qromag.com/wp-content/uploads/2010/03/washedoutlifeofleisure.jpg" alt=" " />You have to give it to Washed Out for trying damn hard to create a new sound that is not confined to any past era... 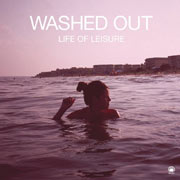 “History repeats itself, first as tragedy, second as farce.”  Though this Marxist quote was generally referring to something other than the music industry, it can be applied just as accurately to it.  Take, for instance, the disco movement.  Beginning in the ‘70s, early disco was a glorious, albeit gaudy snapshot in musical history.  Fast forward a few decades and we have the tragic rebirth of disco.  This post-disco period is a time many music historians tend to conveniently forget out of sheer embarrassment.  But fortunately, this phase faded rather fast, and now, come the first decade in the 21st century, we see the ghost of disco infiltrate our airwaves again.  This time, however, it is done with ironic intentions in mind, so is therefore accepted into society without ridicule.  First created, then tragically reinstated, and then satirically born again; history has the tendency to repeat itself.

In short, we live in an era of ‘post-’ prefixes (post-punk, post-rock, post-grunge…) and revivals.  We are so obsessed with taking a dated concept and injecting new life into it, that in the process we are losing our innovative spark.  Music-wise, this means a lot of hearing the same old things, over-and-over again.  So if repeating history too many times will inevitably end up in farce, clearly we need to create something brand-new and unprecedented.

You have to give it to Washed Out for trying damn hard to create a new sound that is not confined to any past era or post-genre.

Washed Out is the one-man-project of multi-instrumentalist, Ernest Greene.  He creates music in his parent’s house in rural South Carolina.  He shuns corporate record moguls, and instead distributes limited numbers of cassettes to only his closest relations.  He shies away from media attention, and was labelled agoraphobic for his general distaste of the outside world.  And yet Washed Out has been celebrated by the musical elite and raved over by critics and listeners alike.

Perhaps Mr Greene errs on the side of the quixotic.  Or perhaps he simply enjoys the allure of exclusivity and finds comfort in his lavish dream worlds.  This could explain his latest creation, Life of Leisure, a record that resembles a woozy Technicolor frolic through a field of opiates.

On this fresh and hazy record, the gentle shifts of rhythm and melody triggers nostalgic responses and provide a perfect platform for reconciliation, and meditation.  The record plays like a sleepless night, where perception is enhanced and reality is altered.

This sonic haze and post-modern ambience is a taxonomist’s nightmare.  Of course many have come up with their own tags to describe this music: Dream-pop, chill-wave, post-electro, lo-fi, glo-fi and no-fi; they all are slightly imperfect phrases for describing a style of music that is generally one or all of the following: lackadaisical, hypnotic, cassette-recorded, warped, affable yet not encouraging, pleasantly apathetic, sun-baked, laid-back, slightly out of focus and… Washed Out.

Yet as far as labelling goes, perhaps the aforementioned do not do Life of Leisure justice.  A solid piece of sonic architecture, the record assembles an array of sounds and textures, adds sporadic splashes of static atmosphere, and in the process creates a listening environment that is truly magnificent.

The vocal prowess of Ernest Greene remains something to be reckoned with.  He seduces us with enigmatically opaque lyrics, a breathless urgency and crystalline arpeggios.  His languid vocals float weightlessly above the ebb and flow of the melody below.

Life of Leisure sounds surprisingly contemporary, and at the same time painfully familiar.  The half articulated musical messages evoke countless sentimental connections and unreachable desires.  Layers of sound are fed through a filter of nonchalance, which gives the record an emotionally distant feel; though this is not necessarily a bad thing.

Ernest Greene’s electro-vignettes are all recorded in his parent’s house, on dated recording software.  But again, this adds to the mystery and attraction of Washed Out’s music.  Greene seems to attack the recording process with a mix of extraordinary genius and naive incompetence.  Some instruments are recorded live, whereas others are simply loops downloaded from the Internet.  Occasionally you can hear a snippet of conversation, or footsteps, or birdsong, and it makes you wonder whether the effect is the result of an overlooked recording device, or a precisely planned vision.

Washed Out’s music does not strive to enhance or better your life, but to help you simply appreciate the now.  Ernest Greene is not enlightened nor does he claim guru status; on the contrary he’s a giddy if naive Southerner that has found happiness within his artistic medium.  Pushing the confines of what is perceived to be electronic music, Greene explores various genres and in doing so crafts his own entirely.  Life of Leisure could perhaps be described as the encapsulation of relaxation and happiness; or better yet, the rejection of anxiety and fear.  No, this won’t change your life or help you understand the world better, but it will give you a 20-minute break from the harsh realities of Western life.  And in a place where time is money, isn’t that worth something?

MP3 Stream: “Feel It All Around”