Near the start of their umpteenth tour, just before playing New York’s Bowery Ballroom for the umpteenth time, Chris Cain and Keith Murray of We Are Scientists sat down... 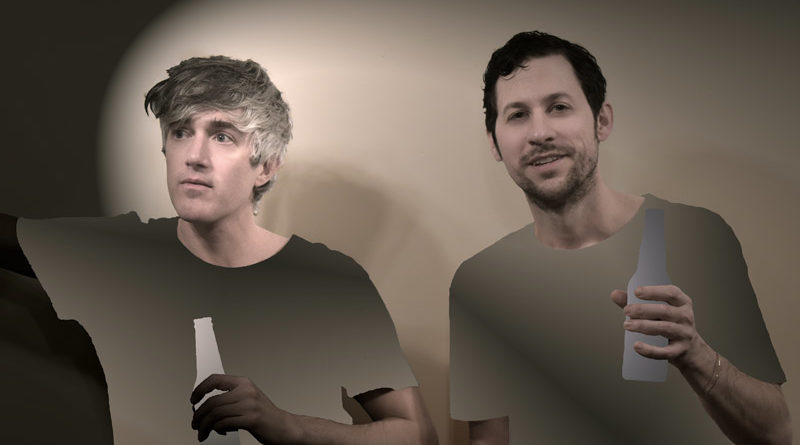 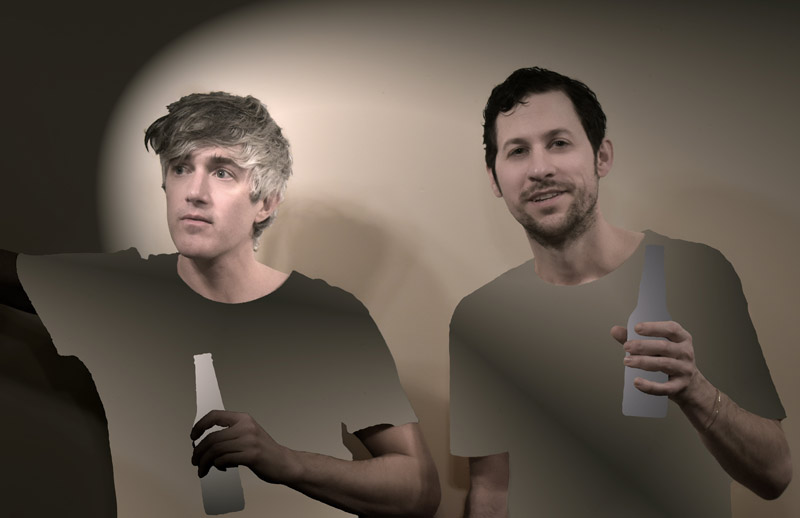 Near the start of their umpteenth tour, just before playing New York’s Bowery Ballroom for the umpteenth time, Chris Cain and Keith Murray of We Are Scientists sat down for a cocktail & a chat with QRO. In the conversation, the bassist and singer/guitarist discussed their tour (including hitting Delaware for the first time), keeping touring fresh through cocktails, going into their comfort zone for their new album, Megaplex (QRO review), their classic, always-fresh stage banter, virtual drummer Ketih Carne, not being professional, rock ‘n’ roll as an adult, being Katy Perry’s “farm team,” and much more…

Chris Cain: It’s been, I say, largely a success.

Keith Murray: And what wasn’t a success, was a triumph!

KM: It’s tough differentiating those two, you we get a feeling, when we experience.

CC: It’s been great. The European leg was six weeks. Pretty long stretch to be away from home.

QRO: Where was that in Europe?

QRO: Just yesterday you played Firefly Festival – how was that?

I think if you were a festivalgoer on foot, you could log some serious miles, just seeing everything you wanted to see.

KM: Your Fitbit would be pretty excited about the progress you made that weekend. ‘A slob like you – I can’t believe what you did!’… [laughs]

QRO: Had you ever played Delaware before?

KM: I don’t think we have. We broke new ground!

QRO: You guys must be old hat at touring by now – how do you keep it fresh and exciting?

CC: Have very short memories, so everything seems new…

KM: Well, Bowery’s a pretty good room. There are a couple of rooms in the U.K. where we are often filled with melancholy when we step back into them. But a place like Bowery’s always a treat.

So yeah, I won’t say that we’re immune to an unpleasant sense of déjà vu, but it doesn’t happen in New York, really.

QRO: How was making Megaplex?

CC: We made it in New York, at our friend’s studio.

Max Hart produced it, which was of course was familiar from the last record, and we recorded at Ash’s Studio in Chelsea, which was very pleasant.

We kind of did the opposite of pulling ourselves out of our comfort zone, I guess.

QRO: Pulled yourselves into your comfort zone?

KM: Threw ourselves deep into our comfort zone – like falling into bed.

CC: I think that we’ve come to the opinion that making the small details of the recording process as easy and as pleasant as possible is a positive thing for us. Like, it allows us to spend all our energy on the songs themselves.

As opposed to putting yourself in some crazy rural studio in the middle of nowhere, upending your life, as a stimulus. We tend to actually prefer being quite comfortable, except for the creative stuff.

KM: I do think that this was the least time that we’ve spent in a studio. So we can’t argue anymore that going to a remote location will make us more efficient, because we’ll wanna work and get the hell home…

QRO: Did you really write most of it in a competition to write ten songs in eight hours and drink beer, as it says on your Wikipedia page?

CC: Not a single incident of that. This was a running songwriting club that we attend, off and on, with friends in the city who are also musicians.

That just became a habit in the last couple of years, and I think many of the songs on the record originated during one of those songwriting days.

QRO: Was this the first album where you used songs from that?

CC: He was doing it on [prior album] Helter Seltzer (QRO review), as well.

QRO: Did writing that way make it more fresh and interesting?

KM: Yeah, I think so. It sort of removes you from that sense of, sitting down, when you’re writing songs, from thinking, ‘Well, I’m writing songs for the record. It needs to be good, and it needs to fit into this genre that I have in my mind, as a ‘We Are Scientists genre’.’

And it sort of also takes the pressure off of every song needing to feel like a hit, to be worth working on. I think that’s the thing that I like the most about it, is that I can spend a lot of energy on songs that I intend to disappear – but then at some times, I’ve proven myself incorrect…

QRO: I want to believe your Wikipedia page, because it also cites the last interview I did with Murray (QRO interview), about not reusing old banter…

KM: It would make me cringe for us to do that, but I also used to really cringe when I recognized that other people were repeating banter. But now I consider that just ‘professional,’ if not very appealing to me.

I think I used to disdain people for doing that, and now I’m just like, ‘Well, they’re professional in a way I am not.’ They’ve crafted a thing that seems to please the audience, and seems to give the show flow. In a way that probably our banter probably does not pave the flow of the show, but I think it pleases people.

CC: I think it disrupts.

QRO: Do you especially have to do it when you’re tuning?

KM: Yeah, but, part of the problem is that, while we’re bantering, we can’t be tuning. So we still need to stop and tune.

We Are Scientists’ video for “Heart Is a Weapon”:

QRO: I noticed no Chris in the video for “Heart Is a Weapon” – but we saw all of Keith. Did Chris not want to match, buff-for-buff?

KM: To make up for the lack of Chris…

KM: But then, on the drive home, you did jerk it, beat it off, for five dollars outside of that Jersey diner… [laughs]

KM: And it was after we’d eaten, so it wasn’t because you needed the money.

CC: I wanted the money; I didn’t need it. Five dollars! Five good dollars – I still have that…

We Are Scientists’ video for “One In, One Out”:

QRO: On the other hand, [drummer] Keith Carne was in the video for “One In, One Out” – but it did kind of imply that he was just a virtual creation and not a real person, like you guys…

KM: That’s how we consider him in real life. An extension of our will.

QRO: You have finally had a stable drummer, these last few years. Has that made things easier & more enjoyable?

QRO: For instance, is there less having to practice the old songs?

KM: It is nice to be back to practicing songs because we need to remember them, not the drummer.

I’m not gonna sell my body for some little skank fan’s pleasure!

QRO: But is it annoying having two “Keiths”? Or Chris, do you feel the odd man out, being the only non-Keith?

CC: It’s annoying for me, at least, that I can’t simply say, “Keith,” and have him understand.

KM: Get a decent response.

CC: Yeah, sometimes with the right inflection, you make yourself understood. But often we end up resorting to last names.

KM: When your tone is stern, must be Keith Carne.

QRO: When you started, did you ever think you’d make it to six records? Or even two?

KM: I thought we’d be at twelve at this point!

CC: I thought we’d be faster than this. Some of the blame is on the audience, for taking longer to ‘digest’ than we thought they would…

QRO: Did you think you would still be doing this now?

CC: Not necessarily, but I don’t think we had a real map in our minds of what would happen. It’s always been kind of, ‘Keep going as long as it’s fun, and possible.’

I don’t think we really know now, how long it might go.

KM: Like with banter, it’s probably more professional to have a drawn-out business plan, but we eschew that…

CC: It takes a lot of the fun out of it…

I think it’s no more frivolous a past time than many others.

KM: I guess it is more easily made as such.

We walked by another band’s crew, we were playing a venue that had multiple rooms, and I was just like, ‘You knuckleheads!’ I feel like we’re very dignified…

CC: We bring dignity to it.

KM: I do feel like, probably in most jobs, there are screwballs and numb-nuts all over the place…

Like with banter, it’s probably more professional to have a drawn-out business plan, but we eschew that…

QRO: But you are both married, and Chris, you have a kid, right?

QRO: Does touring get in the way of daily parental duties?

CC: Well, it removes me from them entirely, for stretches at a time.

KM: But you do still seem to ‘remotely manage’ the household.

CC: There is a fair amount of remote interaction.

I don’t think it makes it impossible. Any traveling job – and this is not the only one – has some serious issues you need to work around.

KM: What I think you need to start doing, and I’m really liking this plan, purely as a ‘familial enabler,’ is that I think we should get a PS1, and only stay at hotels with great WiFi, and every night, for an hour, we devote playing a game with your son…

KM: Wake him up at one-thirty, two AM. [laughs]

KM: I guess in Europe, it would just be before school.

There is an element of that, for sure. You need to go to every town, and go to potential fans, and convince them why they should listen to this record.

KM: Tell them why.

QRO: After seeing Katy Perry at Madison Square Garden (thanks to tickets from her keyboardist/your former keyboardist/current producer Max Hart)…

QRO: Do you feel you need to up your stage show game?

Well, no, because I do know that Katy Perry’s touring game is a financially viable practice.

Now, it’s a great advertisement for her as a brand, her records. She’s able to funnel that money to treat touring as a means of great door-to-door salesmanship.

CC: We don’t have to do Revlon commercials just to make ends meet.

KM: We only do that for pleasure. [laughs]

QRO: Did it not feel incredibly creepy, being the beer-swilling old guys at a Katy Perry show – there without any children?…

KM: We were definitely not the oldest guys at the Katy Perry show.

QRO: But you didn’t have kids [with you]…

KM: We didn’t have kids.

CC: I don’t think we were the oldest people to even have kids.

CC: I think that’s a popular destination for stag dudes…

Shell out for the meet-and-great.

KM: ‘He’s getting married – you gotta fuck him!’ [both laugh]

We don’t have to do Revlon commercials just to make ends meet.

QRO: Have people clamored to play with you guys, now that it’s known that there’s a ‘We Are Scientists-to-Katy Perry pipeline’?

QRO: I thought he was more Taylor Swift…

KM: He can’t get his foot in the door with Taylor Swift…