At some point, a long-running band becomes ‘reliable’, and We Are Scientists have long since passed that point.... 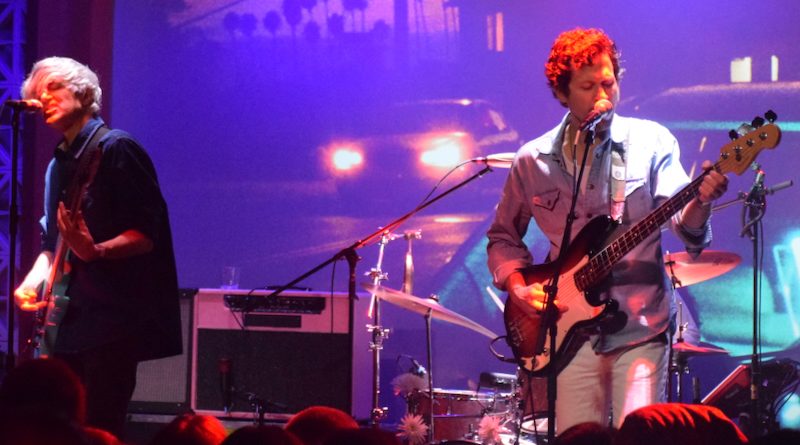 At some point, a long-running band becomes ‘reliable’, and We Are Scientists have long since passed that point. The NYC trio have been going for over twenty years now, and if they never blew up, if they’re still bigger in the U.K. than the U.S., they still know how to deliver. That goes from catchy, danceable records like their latest, LOBES (QRO review), to their exciting live shows like the LOBES release party on Friday, January 20th at Brooklyn Made.

First things first: Brooklyn Made might not have been the best place for this show. The new venue (QRO venue review) is deep in Brooklyn, and was particularly packed for the hometown show that really could have been at a bigger spot. It’s also a place that doesn’t handle being packed well, entrance at the back right that leaves one basically nowhere to go when you finally enter (after waiting on line, realizing that the line didn’t include the box office, leaving the line after you finally got to security, going to the outside box office, getting back on line, and finally getting through security that’s gotta check everything). Oh, and its deep in Brooklyn – it is very close to a stop on the L, but that stop & and the L as a whole stopped going back to Manhattan right after the show ended. Admittedly, not all of those are Brooklyn Made’s fault.

Not that any of this dulled We Are Scientists. Even for a band that loves to perform, they were particularly amped this night, being the release date/party for LOBES, their first show in a while, and first before soon going to Europe on tour. Indeed, they started with LOBES’ “Lucky Just To Be Here”, and mixed in the new songs with the not-as-new and even old. Like most long-running acts, there’s always a push-pull between the new and old material, the band excited about the new (and maybe a little tired of the old), but the crowd wanting the old songs they heard when they were younger. And your sets ain’t getting any longer.

But We Are Scientists included not just new songs like “Lucky”, encore return “Less From You”, and latest single “Turn It Up”, but also the early classics & stuff in between. Indeed, it’s notable how songs that were once ‘the new ones, not the old ones’ are now part of ‘the old ones’, from into encore break staple “After Hours” (2008’s Brain Thrust Mastery – QRO review) to “I Cut My Own Hair” (2021’s Huffy – QRO review). And yes, there was material from 2005 debut breakthrough With Love and Squalor, such as “The Great Escape”, whose opening guitar riff is up there with those of Phoenix’s “Lisztomania” & Yeah Yeah Yeahs’ “Maps” in iconic aughts opening riffs.

But you already knew all about their music, and wanted to hear about what you really come to a We Are Scientists show for: the on-stage banter. Bassist/singer Chris Cain and guitarist/singer Keith Murray have long been delivering great unscripted jokes on stage – indeed, when COVID forced them & everyone else into their homes, they had a great (partially scripted) Instagram livestreams to keep us all going (the title to LOBES comes from those IG sessions). This night, there was naturally much talk about the new record, from Chris joke-judging the crowd on their reactions to the new songs, to Murray stopping “Cut” in the middle so he could finally mention the new album was out (later noting he should have waited thirty seconds for the next song, “Turn”). But there was also Murray telling the crowd that he just learned Italian in the dressing room from Duolingo (that managed to segue into a Sean Connery impression), Cain debating Murray’s usage of old-timey words like “knucklehead”, Murray naming his new blue guitar “Chris C.” to much confusion, comment cards, champagne (which did finally make it out), drummer Keith Carne’s parents were there, and more.

You might not be able to rely on much of anything these days (such as the NYC MTA…), but thankfully there are ‘reliable’ artists who you know will always deliver live – like We Are Scientists.