The night began quiet and calm on a breezy Sunday night in Tampa’s Ybor City, but that was soon to all change.... 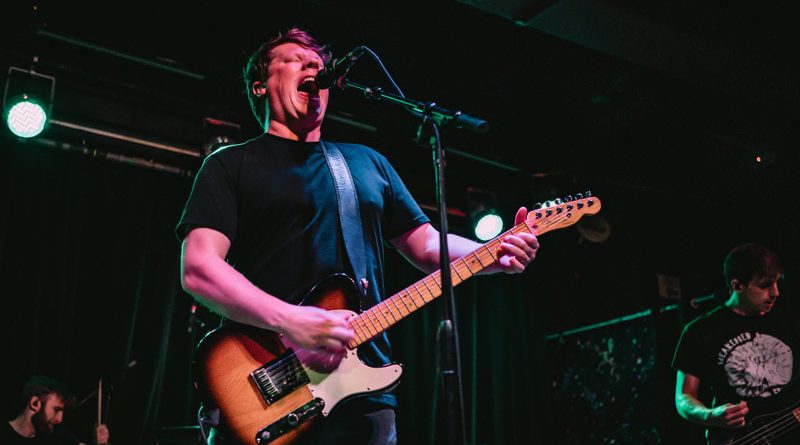 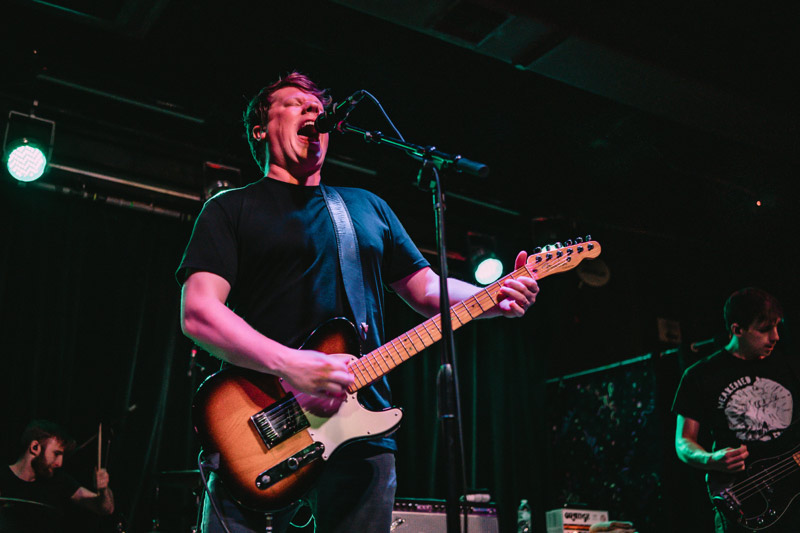 The night began quiet and calm on a breezy Sunday night, February 16th, in Tampa’s Ybor City, but that was soon to all change. In a small venue off 7th Avenue, a small Scottish rock band was preparing to punch a hole through the silence of the night, bellowing out for their return to Tampa Bay on the twelfth show of the tour.

Performing at The Orpheum in Tampa was a small rock-band from Edinburgh, Scotland known as We Were Promised Jetpacks. Coming from a small, humble start in 2003 as the winning competitors in their high school’s ‘Battle of the Bands,’ members Adam Thompson, Sean Smith, and Darren Lackie soon signed to record label Fat Cat Records, releasing their debut album These Four Walls in 2009 (QRO review). 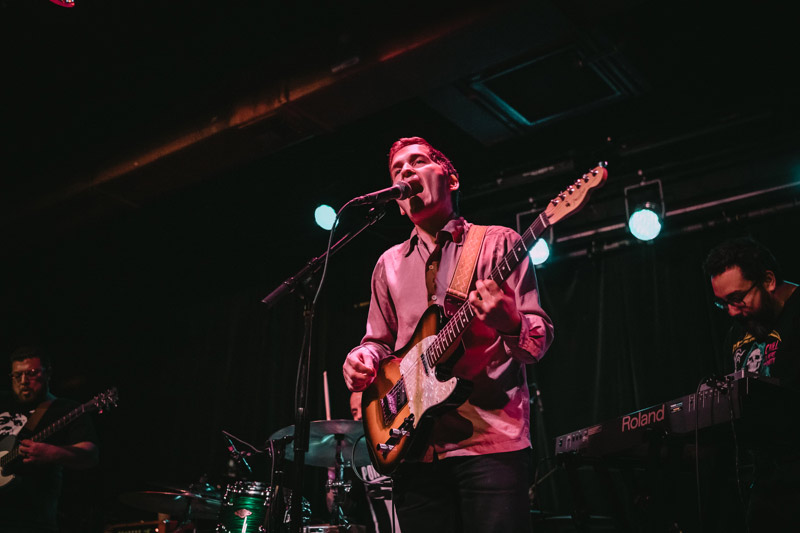 As the doors opened, the lined-up fans quickly began to take their places inside the venue’s standing area. Soon after, Tampa local punk rockers Hi-Beam took the stage as the first of two openers of the night. Hi-Beam quickly got to work, banging out riveting guitar solos, deafening drumbeats, and deep notes on the bass. Starting out strong and energetic, the group invigorated the crowd, casting away all thoughts and worries of the workday soon to come. 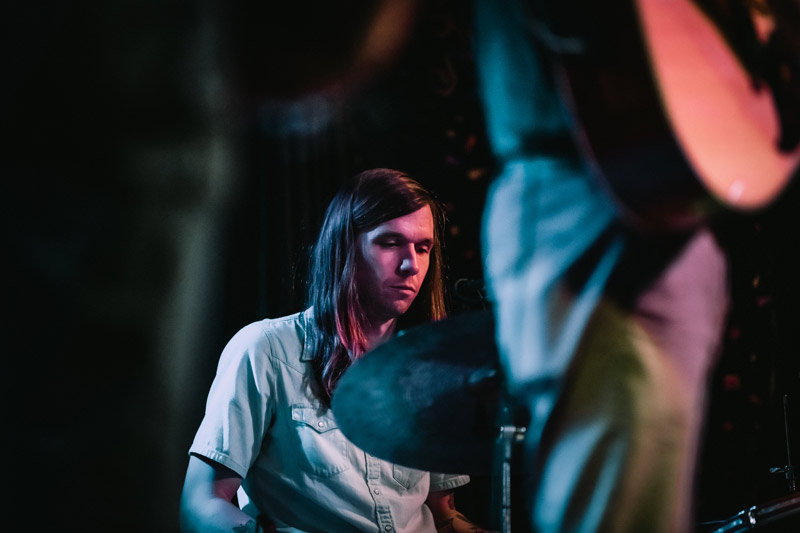 Click here for photos of Slaughter Beach, Dog from this show in the QRO Concert Photo Gallery

After performing for half an hour, Hi-Beam left the stage as stagehands soon came to set-up for the second opener of the night. Consisting of two members from the former band and punk revivalists Modern Baseball, the group known as Slaughter Beach, Dog took to the stage with acoustic guitar, bass, drums, and harmonica in hand with members Jake Ewald, Ian Farmer, Evan Clarke-Moorehead, and Patrick Ware. Acting as a cool-down from Hi-Beam’s rousing performance, the band played relaxing, mellow, ambient songs as they commanded attention for their half hour set. 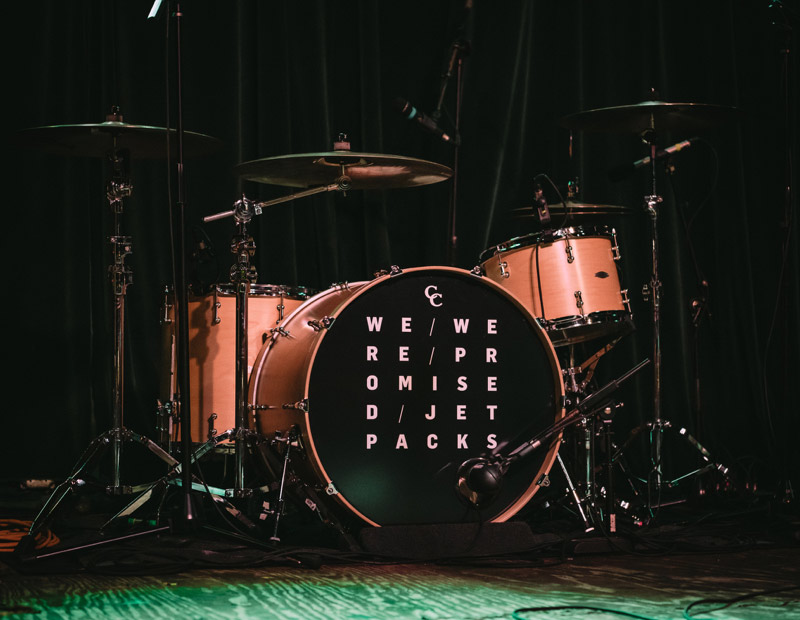 Click here for photos of We Were Promised Jetpacks at Terminal West in Atlanta, GA on July 28th, 2019 in the QRO Concert Photo Gallery

Click here for photos of We Were Promised Jetpacks at Terminal West on October 20th, 2018 in the QRO Concert Photo Gallery

Click here for QRO’s review of We Were Promised Jetpacks at The Bluebird in Bloomington, IN on March 27th, 2012

Clearing the stage and resetting, stagehands began their work, moving everything to the back of the stage while creating a large opening on stage for the headlining act. As time approached for the Jetpacks’ performance, the venue began to fill, as 200 avid fans began to pour in through the doors, leaving their deepest worries for the week to come outside by the street.

As fans all clamored together, engaged in conversation, beers in hand, and smiles across their face, the lights soon began to fade as the stars of the night appeared on stage. Without a second of hesitation, the group picked up their instruments and quickly launched into their set, opening up with their 2011 single “Human Error”. With no time to be spared, the band jumped from one song to the next, sweat beading from their faces in just the first two songs, and taking no time between songs for a break.

“I’ve never seen a group dance as good as you guys,” said Thompson, as they finished performing “Moving Clocks Run Slow” from their debut album, quickly moving to “Safety In Numbers” from their 2014 album Unraveling (QRO review).

Utilizing the open stage area, frontman Thompson dashed back and forth across it, strumming his guitar, dancing up against his bandmates, and getting up close and personal with front row fans while head-banging and singing. It was only while he sang into the microphone that Thompson remained still, with his constant movements across the stage keeping the audience engaged and ever tracking his movements as their heads panned back and forth.

As the group reached the climax of their performance, Thompson would occasionally step away from the mic to sing, with his boisterous voice echoing through the venue, and even being picked up by the microphone across the stage, carrying his voice even farther. 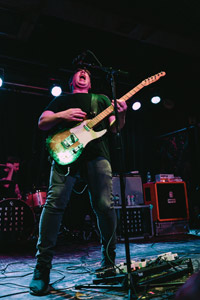 “We’re a little band from Edinburgh, Scotland and we can’t thank you all enough for coming out. A really lovely audience, thank you for all the love,” stated Thompson as the band caught their breath before moving into their five-minute-long song, “Boy in the Backseat”, off their 2011 album In the Pit of the Stomach (QRO review)

They soon began to close out their set, as Thompson began to strum out the opening guitar notes to their most well known song, “Quiet Little Voices”. With only a few notes played out, the crowd immediately erupted into a cacophony of screams and cheering, as members of the audience put down their drinks and ran from the back to the front of the stage. As Thompson began to belt out the opening lyrics of the song, every fan within the building immediately joined in, with both band members and fans alike singing together in unison.

Ending their set with a performance of “Hanging In”, a song off their latest album from 2018, The More I Sleep The Less I Dream (QRO review), Thompson and company began to wave goodbye to the audience, but not before Thompson hopped down from the stage to get a picture with all of the fans. Giving out a few hugs, high fives, and fist bumps, Thompson soon climbed back on stage and disappeared off to the side, with the crowd still cheering and keeping the silence of the night from returning. We Were Promised Jetpacks return to Tampa Bay was a night filled with energy, reminding the city that they still know how to keep everyone alive and awake, and keeping their fans waiting for more on their next pass through. 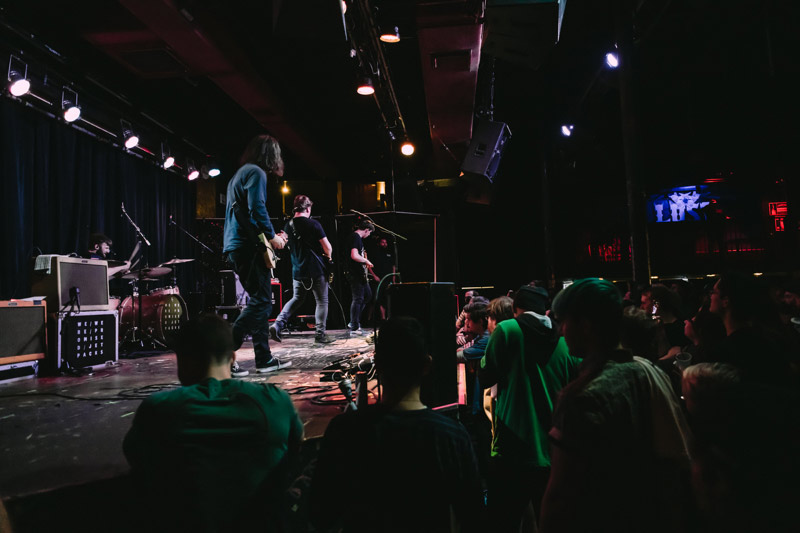