We Are Scientists : Barbara

<img src="http://www.qromag.com/wp-content/uploads/2010/07/wearescientistsbarbara.jpg" alt=" " />How are We Are Scientists not cheesy?<span>  </span>Somehow they keep managing to put it all together into a winning package. ... 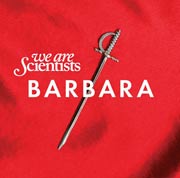 How are We Are Scientists not cheesy?  Part of the Brooklyn (by way of Claremont, California) indie music scene since before the boom, their rock uses more electro, their lyrics more emotion, and their sound more uplift & catch than would seem to pass the hipster-hater test.  Yet somehow they keep managing to put it all together into a winning package, if a bit similar each time ‘round, like on their latest, Barbara.

The ‘traditional’ We Are Scientists, an electro-rock press upward & forward, but with catch & notes of darkness, comes through on opener/single “Rules Don’t Stop”, and while there is a bit of ‘been there, done that’ feeling for anyone who’s heard We Are Scientists before, it’s still what they do best, continued with the even more growing following “I Don’t Bite” and single “Nice Guys”.  It does get a bit by-the-numbers near the end of Barbara in pieces like “Break It Up” and “You Should Learn”, but never not good.

Sticking to that standard is understandable, though, as We Are Scientists still have some trouble when getting outside of their comfort zone, like when they mismatch the catch-flow chorus & staccato verse in “Jack & Ginger”, or throw in an unnecessary guitar shred in closer “Central AC”.  But “Foreign Kicks” nicely changes the script by going slower & more wistful, while “Pittsburgh” does the Steel City proud by being epic in all the right ways, sort of combining what was once great about British acts like Athlete (QRO album review) and Muse (QRO album review).

Despite being American, We Are Scientists have had more success in the U.K. (probably why electro-dance label Astralwerks signed them for their last, Brain Thrust Mastery – QRO review – but Astralwerks was then sucked into parent company EMI, leaving WAS high & dry), where the hipster-hater lines aren’t so clearly drawn.  Anglo-love may contribute to the band somehow not being cheesy; certainly also helping is their penchant for comedy, not in the music but everywhere else, such as between song banter live (QRO review) and in the hilarious MTV shorts they did last October for the Lil’ Wayne programming block, Steve Wants His Money.  But really, while they’ll never be as fresh & original as 2006 breakthroughs With Love and Squalor and “It’s a Hit” (QRO video), We Are Scientists just put together enjoyable music.