<img src="http://www.qromag.com/wp-content/uploads/2012/02/wearetheworksinprogress.jpg" alt="We Are the Works In Progress" /><br /> Blonde Redhead's Kazu Makino brings the benefit compilation album into the twenty-first century with <i>We Are the Works In... 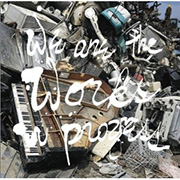 The ‘benefit compilation album’ feels like such a twentieth century concept, back when people thought music could save the world, back when people bought albums.  These days, artists team up for remixes or side-project supergroups, and compilations are for movie soundtracks or digital mixtapes.  But bringing the benefit compilation into the twenty-first century is Japan (where else?), thanks to Kazu Makino of Blonde Redhead (QRO live review), on We Are the Works In Progress.

As one can tell by the line-up, Progress also brings the benefit album into the future in sound.  From the meditative ‘tronics of Four Tet’s opener “Moma” to the closing hidden track of original guitars to Blonde Redhead’s “23” (not on the album of the same name – QRO review), Progress is a distant, restrained record of low temperature electronic loss and wash – fitting for the subject material, a massive wave of North Pacific water crashing into northern Japan and crippling a nuclear reactor.  The reduction in sound can get a bit much at times – “Curve” is minimalist even by Deerhunter standards – but always proves interesting.

Music was never going to change the world like the hippies hoped it would, but it feels like it has been steadily losing whatever ground it did have these days, between internet file-sharing and MTV reality shows.  Leave it to a tragedy of the past & the future, in a nation of the past & future, to bring Progress to these Works.