We Were Promised Jetpacks : The Last Place You’ll Look EP

<img src="http://www.qromag.com/wp-content/uploads/2010/04/wewerepromisedjetpackslast.jpg" alt=" " />While there's certain maturity to the new EP from We Were Promised Jetpacks, it ends up sounding like a single, with four b-sides.<span> <br... 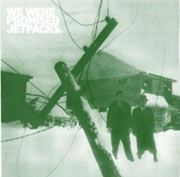 The debut album from We Were Promised Jetpacks, These Four Walls (QRO review), won many critics and audiences over with their anthemistic post-punk melodies.  Between their hectic international tours and festivals, they’ve no managed to release an EP – so soon.  Two of the five songs on The Last Place You’ll Look are simmered down versions from These Four Walls.  While there’s certain maturity on the EP, it does not bode well for the young quartet’s style, and ends up sounding like a single, with four b-sides.

Of the two new tracks, the Jetpacks have been promoting "Far Cry" on their tour (QRO video), but "With The Benefit of Hindsight" proves better fit for the Scotsmen’s skills.  With a progressive layering that builds up to an emotional intensity, "With The Benefit of Hindsight" is the most favorable successor to carry on the torch of These Four Walls.  On "Far Cry", what started out as a promising Mogwai (QRO album review)-like somber strums turns into a sonic mess, with the cacophony of the instruments muddling the drunken vocals.  "This Is My House, This Is My Home" has been transformed to skeletal concert hall lament, oblivious of its guitar and percussion race to the big bang collision origin.  "Short Bursts" probably suffers the worst metamorphosis.  The marching band drumming, string quartet, controlled vocals with more emphasis on glockenspiel hardly measures up to the original incarnation, constructed of thundering drums, piercing guitars and straining cry of declaration.

This new interpretations adds lush atmosphere and could sound quite sweet to one’s ear if you were not familiar with their previous incarnation.  If this is the direction the Edinburgh lads plan to further pursue, it is a blessing that the Jetpacks introduced their fans with an EP, rather than a full album that lacks austere atmosphere and fervent progression that garnered their audience.

Though the comparison to labelmates/countrymen/friends Frightened Rabbit (QRO live review) and The Twilight Sad (QRO live review) were unavoidable from the start, there was enough freshness on Jetpacks’ debut for a discriminating listener to distinguish them from their label mates.  The Last Place You’ll Look threatens to bury them among the sea of homogenous sound of FatCat.