We Were Promised Jetpacks : These Four Walls

<img src="http://www.qromag.com/wp-content/uploads/2009/07/wewerepromisedjetpacks.jpg" alt=" " />FatCat pulls another one out of its hat with We Were Promised Jetpacks. ... 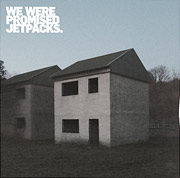 Scotland is a sad, but epic place, with dashed heroes like William Wallace and Bonnie Prince Billy, who died on its sweeping moors while fighting – and falling to – the perfidious Albion to the south.  Its music has reflected that as well, most recently in local FatCat Records’ line-up of epic, heart wrenching sounds that build into almost post-rock vistas.  Think The Twilight Sad (QRO live review), think Frightened Rabbit (QRO live review), and now, think Edinburgh’s We Were Promised Jetpacks.  While their name might be more ironic than their country/label/upcoming tourmates, WWPJ traffic in similarly intimate-yet-expansive sounds on debut LP, These Four Walls.

The only problem on Walls is when WWPJ fail to add anything.  Penultimate “Keeping Warm” way too easily compares to Rabbit’s “Keep Yourself Warm” (QRO video), especially as those words are pretty much the only singing on “Keeping” (which instrumentally builds for four-and-a-half minutes before any words are spoken).  Outside of Scotland/FatCat, the style might be unfamiliar, but it’s hard not to shake the feeling that this is another Twilight Rabbit record.

However, there are tracks where WWPJ builds upon that ‘Scottish sound’.  Pieces like opener “It’s Thunder and It’s Lightning”, “This Is My House, This Is My Home”, and “Short Bursts” use a dark, somber, ominous press to grow & grow & grow into bad times with a bigger & better sound.  There are also a couple of places where the band nicely marries some indie-strum to their style, such as on “Roll Up Your Sleeves” and “Moving Clocks Run Slow”.

We Were Promised Jetpacks were discovered by Frightened Rabbit (after winning their high school’s battle of the bands competition), and it’s not hard to hear why FR invited them on their Midnight Organ Fight tour.  Those comparisons can be a little stifling – especially as Frightened Rabbit in particular don’t vary their own sound quite enough.  But to anyone who loves what FatCat makes, this is right up your alley, and if you haven’t picked up what Scotland’s putting down, what are you waiting for – jetpacks?