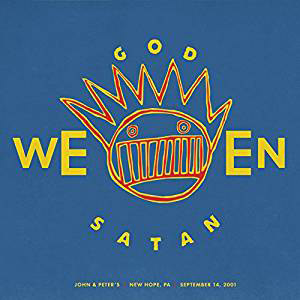 A new Ween live record is here, live albums being not so uncommon right now as to herald a whole lot of attention, and they have several. There are many that are just so a band can release something. However, this one is with many old songs, a full album run-through, and at least enough tracks for justifying a live album, and it’s also still interesting in the weird approach. God Ween Satan Live will of course continue their differing styles from most out there, even most weird bands. This is similar to some others in that they are mostly as psychedelically interesting as musically talented as those even now. Though more proficient than others and very conspicuous for their art and more silly emotionally bending, or in the very least, wrought with rhythm and keyboard jumping sensations.

God Ween Satan Live was recorded at John and Peter’s Bar in Pennsylvania, their home state, back in 2001, and is easily more diverse than many other releases. However, the bigger question is often how good a release is for a new Ween album, as much of their discography is riddled with records that simply do not stack up to their better work. The obvious observation to make here during some of these numbers is that they are drug related, so not for everyone, but they are inspired by a strange energy that usually comes with that enjoyment.

Click here for QRO’s review of Ween at Les Schwab Amphitheater in Bend, OR on July 2nd, 2011

So, on to the songs, and starting with the most interesting, the actual last number on here is a real treat in its guitar in “Puffy Cloud”. It has their trademark lyrical nonsense, “Float Away On a Puffy Cloud”, and the guitar is trippy but tropical and relaxing, it has some somber drug related lyrics in there too. While this is for some annoying, but one listens to Ween for escape or for meditation, so this is alright. The first track is also decent, but a little too angry in the yelping and punk vibe of “You Fucked Up” and “Up On a Hill” is also really cool, with an almost southern-ish Primus punk vibe, just solid.

Many of the songs are similar to each other; there is some punk, some acoustic rock, and some humour. This is alright, as the album has a vulnerable, psychedelic theme and some good guitar, but it would be nice if there were more banter between the songs. “Tick” is very blues-y rock and works well live. The next few tracks are a little distracted from the blues-rock theme, but fine.

After “I Gots a Weasel”, however, it becomes the record it is, live or not. “Fat Lenny” is solid, and “Cold and Wet” is great live. “Squelch the Weasel” is one of those especially acoustic and relaxed numbers like “Puffy Cloud”. “Mushroom Festival In Hell” is the type of thing that people go to weird rock for, a five-minute, no bars, trippy jam. “Old Queen Cole” is also great live with the steady drums that lend themselves to this. Those songs kind of round out the whole thing with this and all live issues, if it jams, it is good, and some people may buy God Ween Satan Live for trite collecting purposes, but overall it does a good job because they are just jamming to their live recording, with some other stuff in between, and they keep weird in the process.