Weezer – Everything Will Be Alright In the End

Oh Weezer, Everything Will Be Alright In the End.... 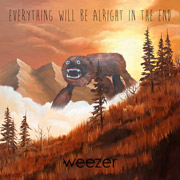 Twenty years ago (has it been that long?), Weezer was the alt-rock breakthrough act with their self-titled debut album, while follow-up Pinkerton (QRO deluxe edition review) became a critical favorite. Like many bands, they declined after that in quality, but not in commercial success, to the point where one was embarrassed to have been a Weezer fan by the tile their third self-titled record (also called self-titled, known as The Red Album – QRO review) came out in 2008. Yet the turn-around began with the following, middling Raditude (QRO review) and definitely with 2010’s Hurley (QRO review – the less said about extras record, Death To False Weezer, the better – QRO review), after which Weezer even toured playing their debut (also known as The Blue Album – QRO live review) and Pinkerton. For the first time in a while, expectations have been high for a new Weezer album, and while Everything Will Be Alright In the End doesn’t have the time-tested awesomeness of the early material, couldn’t have, it lives up to your hopes.

After the over-production of records like The Red Album, for Everything Weezer recruited Ric Ocasek of eighties great The Cars (QRO album review), who produced The Blue Album and 2001’s also self-titled The Green Album, while returning to their four-piece sound. There’s the band’s big heartbreak rock on such tracks as “Ain’t Got Nobody”, “Lonely Girl”, and “Foolish Father” (though the latter is a father’s broken heart), all done well, plus a kiss-off to a boy duet “Go Away”, but the standout of these songs is “Da Vinci”, wherein singer/guitarist Rivers Cuomo cleverly describes an indescribable girl.

More recently, Cuomo has been writing songs about being in a band, like major label kiss-off “Pork and Beans” or memories “Memories”, but he’s at his best form here with “Back to the Shack”, where he admits he needs his band (and should go back to lead guitar – “And Pat should play the drums,” a reference to band’s tendency to bring in drummer Josh Freese so regular drummer Patrick Wilson can play Cuomo’s guitar parts live while the singer is free to roam the stage), disco sucks, and more. There’s also “Eulogy for a Rock Band”, Weezer’s premature elegy.

Mention should also be made of Cuomo stretching his songwriting across time, far farther than “Back In the Shack”. While “Da Vinci” just used Leonardo, Stephen Hawking, Rosetta Stone & others to talk about a girl, “Cleopatra” is actually a song about the one-and-only queen of Egypt. Meanwhile, “The British Are Coming” is a straight-faced kiss-off to “those punk redcoats” – thankfully no tea-party references. And the album ends with “The Futurescope Trilogy”, though those three tracks are mostly guitar wails.

Time has made early Weezer basically unassailable (it’s surprising to think that, when it was released, Pinkerton was a disappointment, at least commercially), and obviously anything new the band puts out can’t get the same space in your heart, at least not yet. But Everything Will Be Alright In the End may be the best Weezer record since they were in the shack.

Weezer – Back to the Shack