Here’s to the third decade of Weezer!... 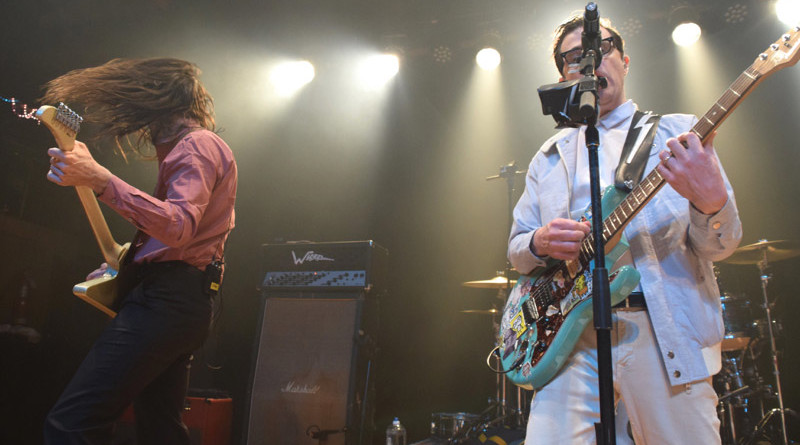 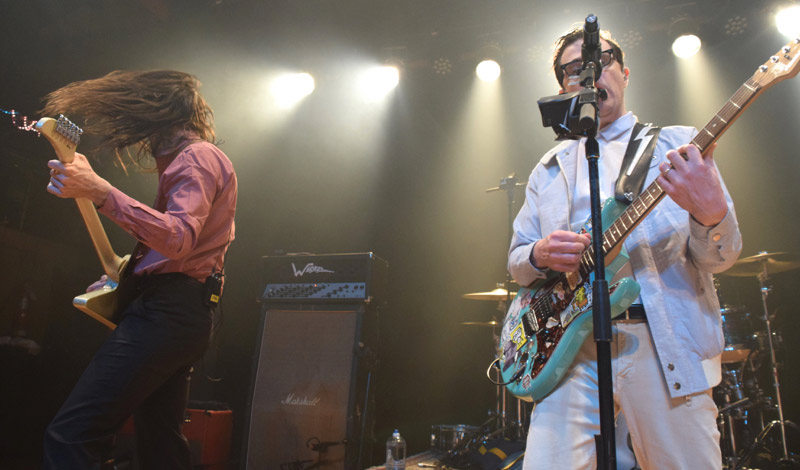 Click here for photos of Weezer at 2015 Project Pabst in Portland, OR in the QRO Concert Photo Gallery

Click here for photos of Weezer at 2015 80/35 Festival in Des Moines, IA in the QRO Concert Photo Gallery

Click here for photos of Weezer at Vina Robles in Pasa Robles, CA on September 12th, 2014 in the QRO Concert Photo Gallery

Click here for photos of Weezer at Nikon at Jones Beach Theater in Wantagh, NY on July 29th, 2011 in the QRO Concert Photo Gallery

Click here for photos of Weezer, playing Pinkerton, at Stubb’s in Austin, TX on June 7th, 2011 in the QRO Concert Photo Gallery

Click here for photos of Weezer at Nikon at Jones Beach Theater on August 25th, 2009 in the QRO Concert Photo Gallery

Weezer are in the third decade of their career, and in the third phase of their career. There was their breakthrough in the alt-grunge era with 1994’s Weezer (other albums have also been self-titled, and so each have been named by the backdrop color, starting with debut Blue – QRO live review) and the commercially unsuccessful, but now critically loved follow-up, Pinkerton (QRO deluxe edition review). Then there was a slow decline in the twenty-first century that reached epic levels with the likes of 2008’s Weezer (Red Album) (QRO review) and 2009’s Raditude (QRO review), where all the grown-up original fans were dismayed with hipster disdain for how big-but-not-good the group had gotten. And now things have turned around, with big rock records like 2014’s Everything Will Be Alright In the End (QRO review) that are appreciated by Weezer’s wide audience. That looks to continue with April’s Weezer (White Album), to be judged by their special, intimate-for-them show at Brooklyn’s Warsaw on Wednesday, March 30th.

First things first: Warsaw (QRO venue review) would not be intimate for most acts, but Weezer have headlined Madison Square Garden (QRO photos there). The place was completely packed for the sold-out show, spilling into the venue’s two side areas (one for the bar, other for the pierogis), except when beefy security pushed everyone from those spaces into the main stage floor for the encore, because they wanted to create a bigger fire hazard? The Warsaw is better known as a Polish national home (thus the pierogis and the beer whose name starts with “zyw”), and can feel more like a place for a prom or Elks Club meeting than a rock show, so perhaps security was overwhelmed. The place did put in a photo pit for this show, to the relief of all the photogs (including your correspondent). 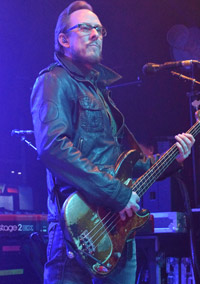 While the evening was clearly billed as one focused on the new album, the set list was basically divided between White/Everything and early material, mostly Blue & Pinkerton. This was perhaps due to White only coming out two days later, plus the warm reception Everything has experienced, leaving only the singles of the former (to be fair, that meant five of its ten songs), but a good amount of the latter – and the rest of the set basically had to be older songs that everyone wanted/demanded. This did leave something of a stark old/new contrast, but there were some sing-alongs to new songs (such as from those in the front wearing paper crowns for “King of the World”) and bathroom breaks for old ones. It also pointed out how much Weezer hasn’t changed (and not just because the middle-aged rockers still have new songs with titles like “California Kids” and “Thank God For Girls”), just one’s attitude towards them: they were never super-alt, just came up in the alternative nineties, but rather a great, big rock band. 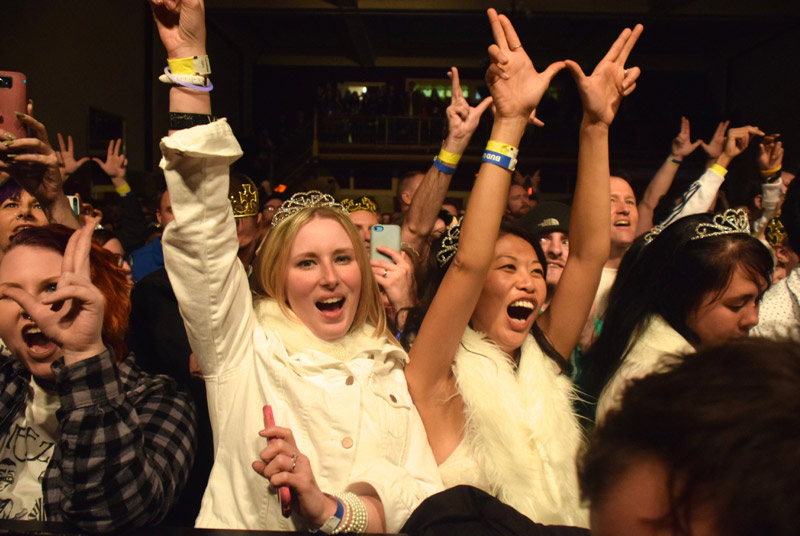 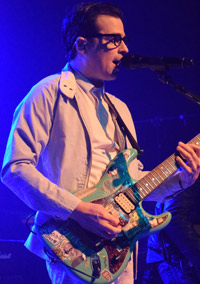 “California Kids” was an uplifting opener for the night, even on the East Coast, but no one could deny the power of Blue’s “My Name Is Jonas” and Green’s “Hash Pipe” right after (especially not your correspondent, singing along in the photo pit). It was neat to see how Everything’s “Back In the Shack” is a fan favorite – perhaps because it’s about how the group should get back to their roots, singer/guitarist Rivers Cuomo remarking, “I forgot that disco sucks” and that “Maybe I should play the lead guitar / and Pat should play the drums” (a reference to Cuomo in the past ten years just singing live, with drummer Patrick Wilson taking his guitar and bringing in touring drummer extraordinaire Josh Freese for drums – this show, for instance, was just the core foursome, with also bassist Scott Shriner and longhair-tossing guitarist Brian Bell). Sweeter new “L.A. Girlz” perhaps should have been farther from “California Kids” on the set list (but this is from an album with multiple “girl” & Cali songs…), but then was the massive sing-along to Pinkerton’s “El Scorcho” – Cuomo literally pointed the mike towards the crowd for the entire final verse, and the audience took up the challenge, bringing home the turkey as Weezer brought home the bacon. But they also sang along to the “I don’t care” chorus in “Pork and Beans” from Raditude – though again, a song about mainstream music sucking. 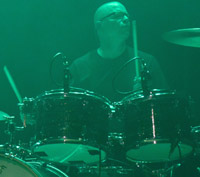 The set did dip in the middle a bit, with the White–Everything–Everything–White of “Do You Wanna Get High?”, “Cleopatra”, “The Wasteland”, and “Thank God For Girls”, though “Cleopatra” had a great guitar solo and “Thank God” has a chorus to be sung by male & female fans alike. And Weezer largely returned to older material after that, like Blue’s “Say It Ain’t So” and Pinkerton b-side “You Gave Me Your Love Softly”, as well as the new “King of the World”, before closing with Green’s “Island In the Sun” and, of course, the song that first broke them through, “Undone (The Sweater Song)” – both are little odd live, with the shiny sweetness of “Island” and the talking of “Undone”, but so beloved by this point that it doesn’t matter. 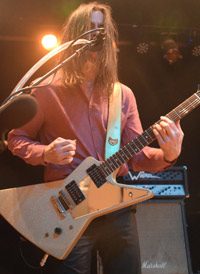 After a short encore break (wherein security closed the bar and packed the audience on the stage floor like sardines), Weezer returned with Make Believe’s “Beverly Hills” (the last song in the first phase of Weezer) and, of course, Blue classic “Buddy Holly”, which particularly worked in a place with as twentieth century a feel as Warsaw. But Weezer are fully in the twenty-first century, with a fan base at the show that was not only large but varied in age and gender – even saw a few parents with their small children on their shoulders (with headphones); Weezer is a band that you can bring your kids to, though perhaps not as intimate/packed/loud a show as this special one.

Here’s to the third decade of Weezer! 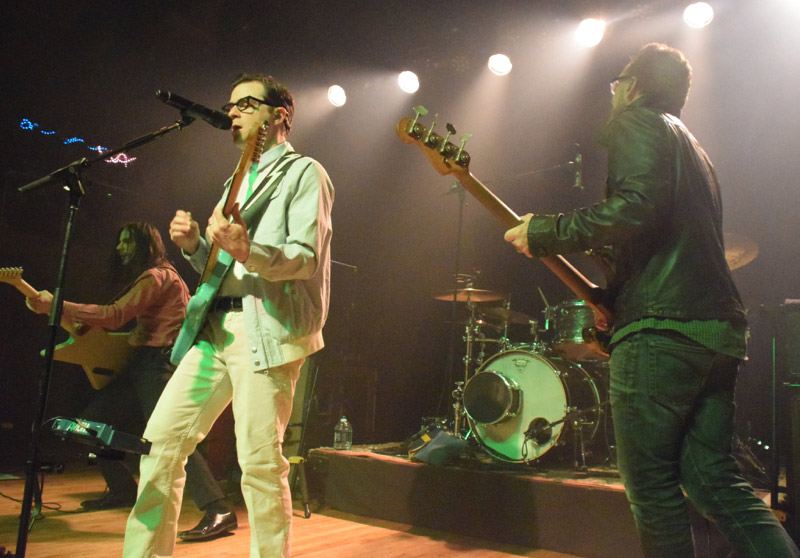