Weezer still deliver the amazing live show that you want them to.... 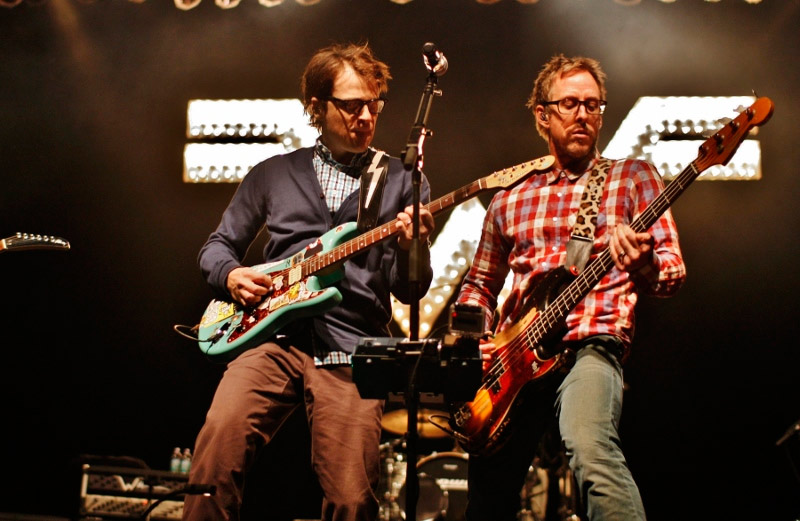 By now, you know the Weezer story: amazing early records in the nineties like Pinkerton (QRO deluxe edition review), followed by a serious decline in this century/millennium – just see the band’s third self-titled record, the one with the red cover in 2008 (QRO Red review).  There might be a good single, but otherwise you’d go to Weezer shows for the old songs, and deal with the new.  It’s a classic tale of a long-lived band. 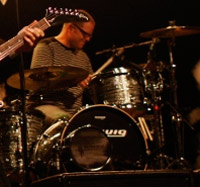 But things have been shifting for a few years now in the land of Weez, as the group has re-embraced their old stuff (such as playing all of Pinkerton and self-titled Blue debut – QRO live review), have picked new singles wisely, and basically done just what you wanted live, like at The Paramount in Huntington, NY on Sunday, November 24th. 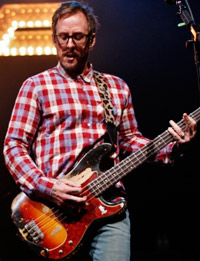 While a cold, cold wind whipped around outside (thank you so much for providing a trolley from the LIRR train station to the venue, Paramount – QRO venue review), it was packed with bros inside for Weezer.  Of course, this is Long Island, so bros (and their girls) were to be expected – and they’re likewise expected at any Weezer show, even in Manhattan (QRO live review in Manhattan), so it was doubly bro-y at The Paramount.  However, Weezer bros are better than most, and it was a good-natured (if still lily-white) crowd; yes, there was some crowdsurfing, but not moshing.  And there were no hipsters there – they wouldn’t be caught dead at a show by such a popular band, and especially on Long Island… 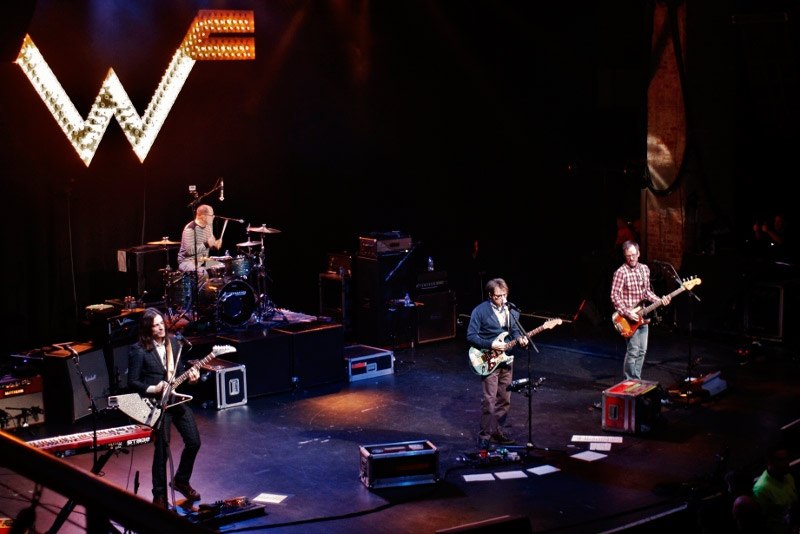 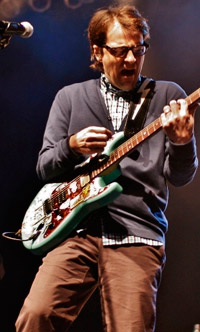 While a new album is in the works, it’s been over three years since Weezer put out their last LPs, Hurley (QRO review), and extras Death To False Metal (QRO review), so one could wonder what they would do on the weekend before Thanksgiving.  Most significant was that there was no back-up drummer (usually super-utility player Josh Freese, who’s also played with everyone from DEVO to Nine Inch Nails to Ra Ra Riot to the recent Replacements reunion – QRO photos), which meant that regular drummer Patrick Watson didn’t have the chance to pick up a guitar and let singer/guitarist Rivers Cuomo roam the stage & crowd, like at most shows (QRO live review).  However, this seemed to make Weezer pull back on the new material (performed live almost always with Freese on drums & Watson on guitar) – and stick to the four-piece oldies.  The most played record that night was not Hurley, but the original Blue album, kicking off with “My Name Is Jonas”. 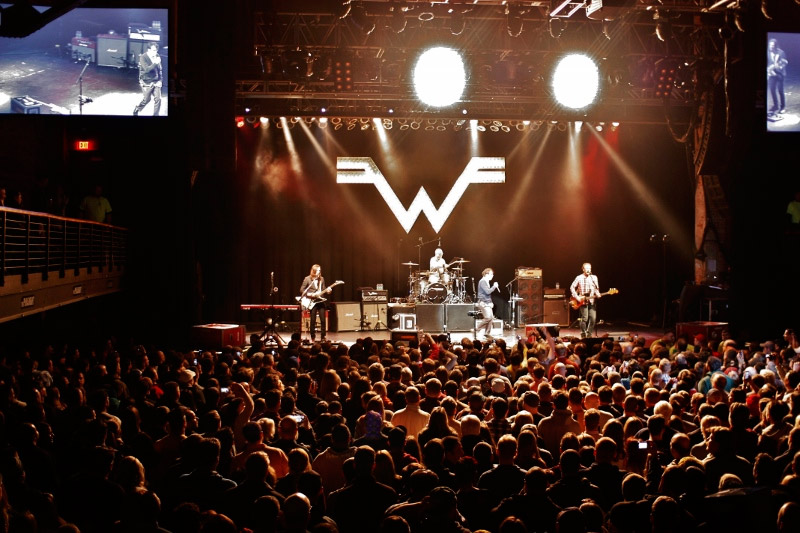 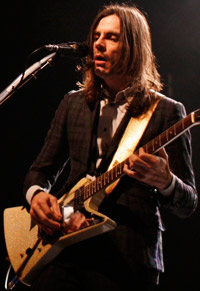 That song, which just might still be the band’s best (and has now outlived the Jonas Brothers…), is a high mark to start a show with, but Weezer didn’t flag down the stretch.  With now over twenty years as a band, they’ve got more than enough songs to fill out a set and leave you wanting more, but it was still great that they didn’t shirk from leaning on their best, earliest work.  They had their “Hash Pipe”, shredded the cello on “El Scorcho” (bassist Scott Shriner miming a bow on an upright), took their board to “Surf Wax America”, got back to “The Good Life”, wanted to be in “Beverly Hills” (guitarist Brian Bell did a vocal wa-wa), looked just like “Buddy Holly” before the encore, and closed with classic “Undone – The Sweater Song” (with Shriner doing the spoken parts – “I’m so stoked…”).  Cuomo was on his guitar for all but Red’s “Troublemaker” (though he only went to the front of the stage, not into the pit), but still let Bell and Shriner each take a turn with lead vocals for a song (“Keep Fishin’” and “Dope Nose”, respectively – Cuomo did mess up the opening for “Dope” and had to start again, but also soloed).  There were a few newer songs, but they were the best of the new, such as “Troublemaker” and “Pork and Beans” from Red, “(If You’re Wondering If I Want You To) I Want You To” from Raditude (QRO review), and Hurley’s “Memories” to return from the encore break.  And yes, Cuomo made it a “Long Island in the Sun” (the Connecticut native joking that he dated girls from “It’s not a ‘Short Island’…”).

Hurley was Weezer’s strongest record in years (the less said about ultra-skippable False Metal, the better – thankfully it’s not found its way into the band’s live set), and not just because of the awesome title & cover photo (QRO photos of ‘the real’ Hurley).  Maybe nothing twenty-first century Weezer does can match their classics, but their prospects have improved – and they still deliver the amazing live show that you want them to. 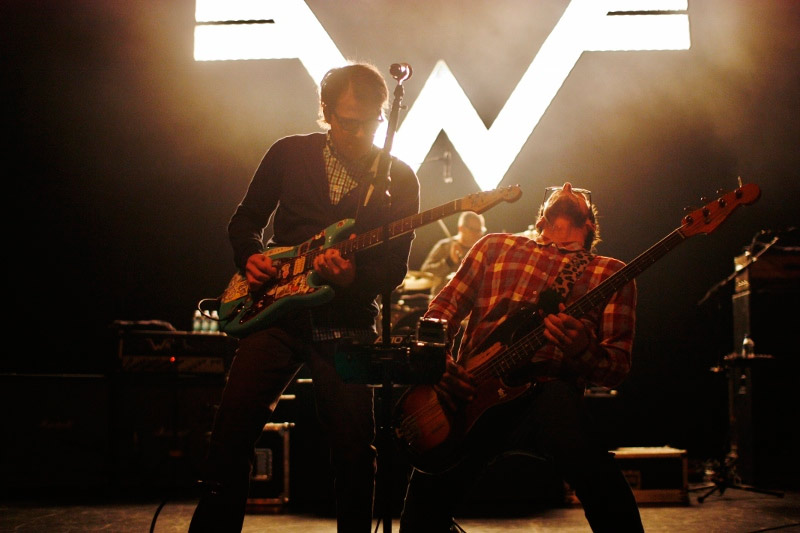