Weezer teamed up with the L.A. Philharmonic to play their new album 'OK Human' and more.... 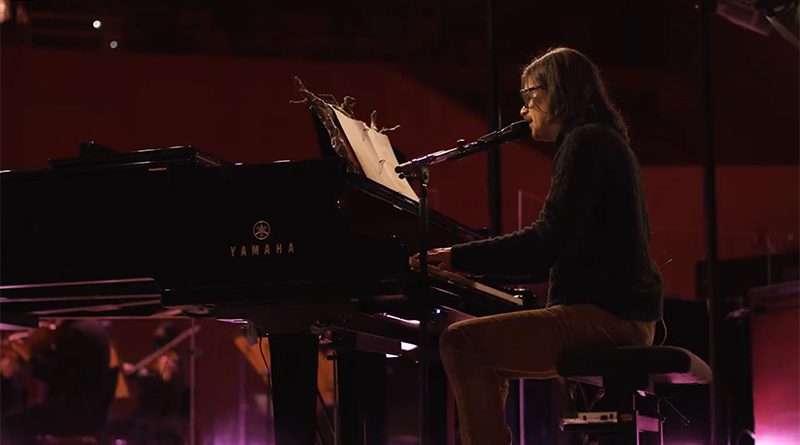 It’s been so long, it’s easy to be over it all. The first days of fear and shutdowns in the COVID-19 pandemic were over a year ago, and while there’s a shot of light at the end of the tunnel, it still seems far off & very uncertain. But the ‘new normal’ has grown old, with things like Zoom meetings and livestreams having lost their novelty. Yet leave it to Weezer to still make their Friday, April 16th livestream special, by playing their new album OK Human (QRO review) live for the first time, with the L.A. Philharmonic and YOLA (Youth Orchestra Los Angeles) from the Walt Disney Concert Hall in Los Angeles.

Though the album title evokes Radiohead, last year Weezer frontman Rivers Cuomo said that OK was inspired by the likes of The Beach Boys’ epic Pet Sounds – including being made with a 38-piece orchestra (QRO photos of Brian Wilson playing Pet Sounds with ‘only’ like a twelve-piece band). Of course, Weezer couldn’t tour Human, and who knows what it would sound like without the orchestra, so teaming up with the L.A. Philharmonic for a livestream particularly fit (and Walt Disney Concert Hall naturally brought great sounds and camera work). This wasn’t like most livestreams, which mostly have been concerts with video cameras instead of fans, but specifically designed for the times and work.

It also answered up-front desire for old songs. Every Gen X alt-rock fan worth their salt loved nineties Weezer records, and hated their early ‘00s albums, but even that is in the past by this point. Those Gen Xers have kids who are now as old as their parents were when they found Weezer, and unlike a lot of acts whose fans have been stuck in their debut decade, Weezer fans still contain a lot of kids. Indeed, in the chat such ideas as 1996’s Pinkerton (QRO deluxe edition) being overrated was uttered, heresy for old Weezer fans (for a better idea of the philosophical divide, see the hilarious Saturday Night Live sketch).

That being said, Weezer themselves seemed very veteran musicians, with all but bassist Scott Shriner seated, including a seated guitarist Brian Bell, and Cuomo on piano. This did take away some of the goofy fun that the band still has on stage, and isolated each member (indeed, the conductor seemed the most animated), but enabled the show to shift into a different tone. From album/evening opener “All My Favorite Songs” (QRO review) on, all the songs were lighter, quite beautiful, even more than on OK Human. One got the idea that this is how Cuomo in particular wanted the new pieces to sound live, carefully crafted from inside his head, whether he was singing about listening to classic literature on his headphones (“Grapes of Wrath” – QRO review – particularly liked the “Yossarian” Catch-22 reference) or lost in his world “Playing My Piano”. Yes, it could get a bit sappy with tracks such as “Bird With a Broken Wing” and “Here Comes the Rain”, but Weezer have always had a sappy side that you actually loved.

The set wasn’t limited to the twelve songs of OK Human, as after closer “La Brea Tar Pits” everyone went right into fellow COVID release, non-album single “Hero” (QRO review), which had particularly good use of the orchestral swell that no amount of electronics can replicate. And yes, there were some old songs. Cuomo stood up and played his acoustic guitar solo for “Say It Ain’t So” from their debut 1994 Weezer (Blue Album) (QRO Blue live review) – the conductor might have sat for this one, but was definitely into it (“vibing” as excited chat said). Weezer (Green Album)’s cheery “Island In the Sun” was already a perfect fit for this set-up, Cuomo starting solo before the band and the orchestra very nicely came in. Pinkerton got its due with “Falling For You” (including the line, “You left your cello in the basement” – but no Pinkerton “El Scorcho” and its, “The redhead said you shred the cello”…), and there was even some more-recent-but-not-new Weezer with their famed cover of Toto’s “Africa”, a meme that became a cover that became the Weezer (Teal Album) covers record (QRO review), and also was well suited for orchestral accompaniment. And the evening closed with Weezer Blue classic “Buddy Holly”, where it was great to hear the usual keyboard parts done by the Philharmonic.

Weezer’s been around so long, it would be easy to be over them. Many fans did a decade or two ago, but many others came in. And if not every new move Weezer has made have been for the best, they are still making new moves, like playing their new orchestral record with a full-on orchestra.