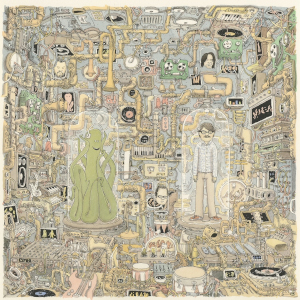 Weezer’s rises & falls have become legendary, from their nineties alt-rock heyday to their aughts slick production nadir, including revival in the prior decade and spottier more recent records. By now, fans know they’ll never get another Blue Album (QRO live review) or Pinkerton (QRO deluxe edition review), but also think that they deserve better than the likes of Red Album (QRO review) or Raditude (QRO review). Lately the band has been throwing some curveballs, from the enjoyable-if-shallow Pacific Daydream (QRO review) to the confused-but-interesting Black Album (QRO review), not to mention the full-on pop classics cover record Teal Album (QRO review) [if you somehow don’t know, Weezer often self-title records that are then referred to by the color of the cover]. Frontman Rivers Cuomo has already described their latest, OK Human, as influenced by the likes of Pet Sounds, and it is a decidedly grand pop emotion album.

Single “All My Favorite Songs” (QRO review) opens OK like a mission statement, and a strong one at that, heart-on-sleeve and all the better for it. Unfortunately, the rest of the record can’t match it, but does try its best, including a 38-piece orchestra. The shiny pop can be fun, like the cheery “Here Comes the Rain”, or leavened with a more interesting topic, such as listening to the classics of literature on “Grapes of Wrath” or a tribute to his piano obsession with “Playing My Piano”. But Cuomo can also easily go maudlin like in “Numbers” or “Bird With a Broken Wing”, as making a full-length around one theme means that the better songs really outshine the lesser ones.

OK Human isn’t Weezer at their greatest or at their worst, but they’ve kind of moved beyond that by this point. Cuomo’s emotional pop tendencies makes going full orchestra Pet Sounds a fairly natural fit, even if it naturally leans into the saccharine at times. Just enjoy OK Human for what it is, rather than think about what it’s not.