Exactly what you expect from a ‘Weezer summer record.’... 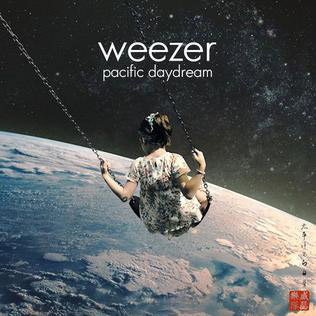 Weezer have long been a summer band. Since their start in the nineties, they’ve appealed to those high school kids who look fondly towards a whole three months of doing nothing. Even as they’ve gotten older, with fans now looking back fondly on those seasons spent idle, even as Weezer have fallen & risen in quality, summer is their time. So it should really come as no surprise that they’ve released a full-on summer record in Pacific Daydream, or that it’s exactly what you expect from a ‘Weezer summer record.’

From opener “Mexican Fender” to closer “Any Friend of Diane’s”, Pacific is a Daydream about summer lovin’ and doin’ nothin’, sweet seasonal relax. There’s a tribute to the “Beach Boys”, hanging out with “La Mancha Screwjob”, and even if the resigned “Happy Hour” might be for “sad days,” is hardly a downer. It’s all summed up in single “Feels Like Summer”, which is exactly what you’d expect a Weezer song with that title to be.

After their early greatness and later badness, Weezer had risen once again in recent years, maybe not the band you loved in high school, but definitely worth listening to the new stuff. This release is a relatively unambitious and one-note album, like a whole record of “Island In the Sun” – but “Island In the Sun” is a really enjoyable song, and Pacific Daydream is still an enjoyable album.