Weezer are coming up on thirty years as a band, yet they somehow are still relevant in pop culture, even among the young.... 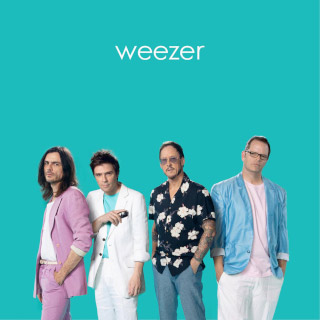 Weezer are coming up on thirty years as a band, yet they somehow are still relevant in pop culture, even among the young. Most recently that was displayed in the random internet quest to get them to cover Toto’s eighties classic “Africa”, which Weezer took to wholeheartedly, from joke trolling by first covering Toto’s “Rosanna”, then embracing “Africa” to the point of regularly featuring it in their shows (for good measure, Toto put out a cover of Weezer’s “Hash Pipe”). Weezer’s “Africa” even launched a Saturday Night Live piece where Matt Damon & Leslie Jones argued over Weezer’s career the way only hard-core fans would. And now it reaches its peak, with the surprise drop of their covers record, Weezer (Teal Album).

Of course “Africa” leads it off, and the first four songs are all in the eighties epic hits vein, with Tears For Fears’ “Everybody Wants To Rule the World”, Eurythmics’ “Sweet Dreams (Are Made of This)”, and a-ha’s “Take On Me”. The group does shift decades, including sixties’ “Happy Together” (which Weezer frontman Rivers Cuomo has also done live, solo – QRO live review) and “Stand By Me” (admittedly made famous again in the eighties thanks to the film of the same name), seventies with Electric Light Orchestra’s “Mr. Blue Sky” & Black Sabbath’s “Paranoid”, plus the album’s biggest surprise, TLC’s 1999 classic R&B “No Scrubs”.

Picking songs that are almost entirely very well known means picking pop hits, but also means that Weezer doesn’t/can’t really add much to them (and the one less likely to be recognized, “Mr. Blue Sky”, is the weakest piece, even more sugary than “Happy Together”). Loading the first half with eighties synths feels overdone, even if each song is great. “Paranoid” is an outlier seemingly just there so guitarist/keyboardist Brian Bell gets a chance to shred & sing, but “No Scrubs” is a much more fun surprise, while “Stand By Me” and Michael Jackson’s “Billie Jean” end the record well.

It’s very easy to not take Teal Album seriously, from its very concept and origin to the surprise drop to the Miami Vice-like pastel clothes the band sports on the cover (plus their video for “Africa”, which features Weird Al Yankovic & his band imitating Weezer’s “Undone (The Sweater Song)” video). Even being just ‘Teal’ points to it not to be measured against other great Weezers like Blue (QRO live review) and Green – not to mention that the band is releasing an original Black record in March. But for what it is, it’s fun, and Weezer is very much in on the joke with you all.