You once again want to listen to Weezer.... 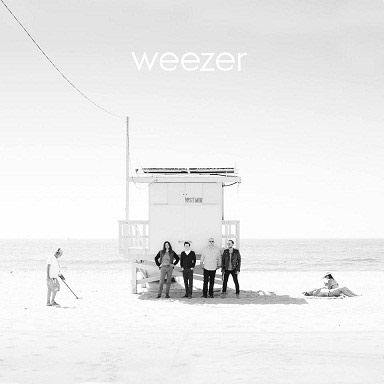 Photos of Weezer at Nikon at Jones Beach Theater in Wantagh, NY on July 29th, 2011

Everyone already knows the story of Weezer, from nineties alt-rock beloved breakthrough to a new millennium of over-polished pop records that felt like a betrayal. But now we are in the next phase of Weezer, where the band’s pop/rock that was never that alt- has been revived in quality, such as with their most recent self-titled record.

Like previous self-titled albums, Weezer (White Album) is sub-named after its backdrop color, now in a direct aping of The Beatles (White Album). But the comparisons aren’t just going to be with the Fab Four, as Weezer (Blue Album) was their iconic breakthrough (QRO live review playing Blue), while Green is somewhat overlooked in comparison to Blue and its following Pinkerton (QRO deluxe edition review). Meanwhile, 2008’s Red (QRO review) might just have been the band’s nadir. Thankfully, while White can’t match Blue (what could?), it is a welcome record.

Opener “California Kids” sets the tone with the big Weezer rock you all remember, not to mention odes to both their home state and the young. Singer/guitarist Rivers Cuomo might be married with kids of his own by now, but his lyrics are still largely from the point of view of the youth that he was, asking “Do You Wanna Get High?”, lamenting a vacation romance in “Endless Bummer”, and even exclaiming, “Thank God For Girls”. Some hipsters might scoff at Cuomo’s perpetual adolescence, but he’s hardly the only singer to do that, and he’s still charming. Plus, it gives us the awesome nerd-rock lyrics to “Wind In Our Sail”, which name-checks “Darwin on The Beagle” and “Mendel experimenting with a pea”.

White does lean on Weezer’s pop-catch sensibilities, but doesn’t force it like some albums of theirs a decade or so ago did. This is a band that references Burt Bacharach in the record’s relatively hardest song, “Do You Wanna Get High?”. Like their last release, Everything Will Be Alright In the End (QRO review), you once again want to listen to Weezer.