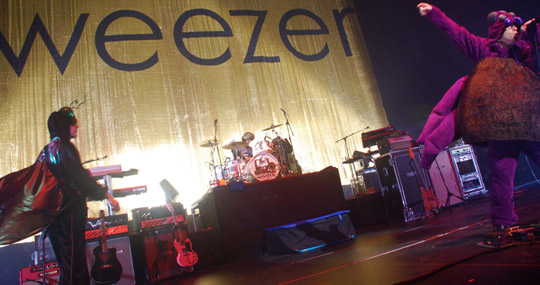 In Weezer’s 15+ year career, the band has gone from being one of the greatest acts in alt-rock to forgotten to hated in hipster communities – but that’s really all missing the point.  Weezer were never that ‘alt’, but did put together some great songs that you love to this day.  If they’ve gone too ‘rock star’ in the last four or five years, well, they are rock stars.  Moreover, they still put on one hell of a show, which they did at New York’s Hammerstein Ballroom (QRO venue review) on Halloween night. 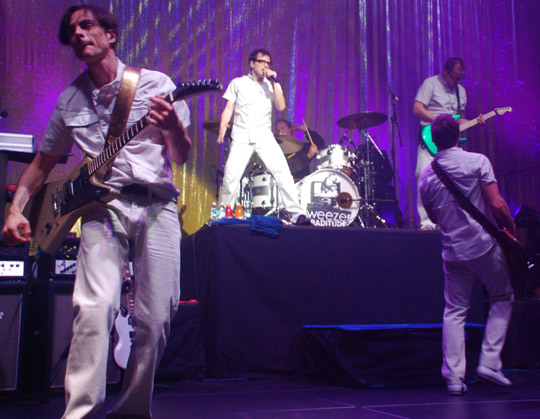 The Hammerstein show was one of ‘101.9 RXP Presents Matt Pinfield’s Holiday Extravaganza’ held there, such as the upcoming Phoenix/Passion Pit concert there on December 2nd, and was introduced by the ex-VJ, now DJ (are there still VJs?…).  Any time a band plays Halloween, expectations are knocked up a bit (especially if it’s a Saturday night, which is how Halloween fell this year), and it’s not just costumes – though those are important, too.  You’ve got to compete with the million-and-one Halloween parties (at an all-ages show like this, maybe even compete with trick-or-treating…).  It’s got to be a party, as well as a concert. 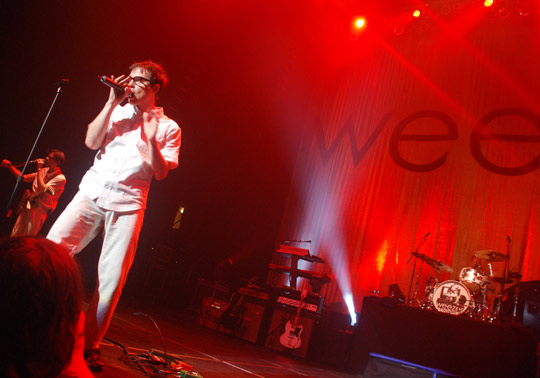 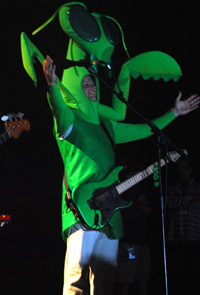 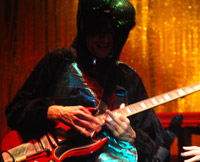 Weezer kicked things off by coming on stage with each member of the band dressed as a plush insect, from the preying mantis/drummer/guitarist Patrick Watson & ladybug (or cockroach)/bassist Scott Shriver on one side to fly/guitarist Brian Bell on the other, with fly/touring drummer Josh Freese in the back middle, on a 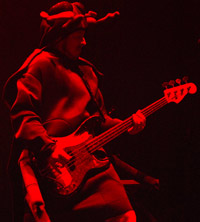 raised platform.  Watson has been playing guitar on some songs on this tour to give singer/guitarist Rivers 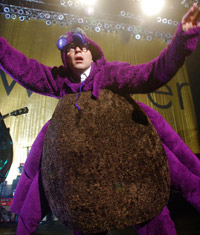 Cuomo full mobility with just a radio mike, and the spider/singer used it (okay, spiders are arachnids, not insects…).  “If you’re a band and you’re playing Halloween … 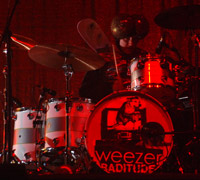 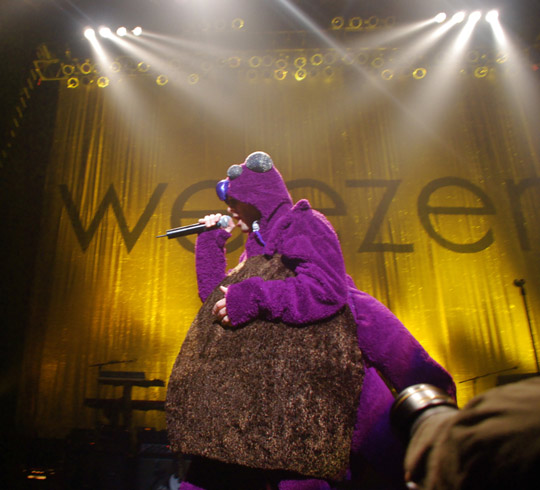 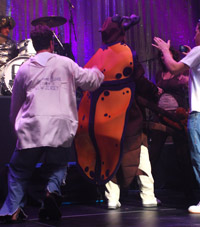 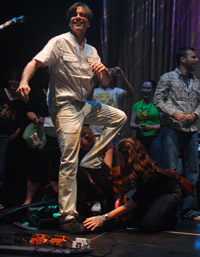 Of course, those costumes were rather hard to play in, certainly for an entire show under the hot, bright lights of Hammerstein, so during second number “Undone (The Sweater Song)”, Cuomo invited some fans on stage to disrobe the band, one insect at a time.  Cuomo directed them to start with Bell, then Watson & Shriver, before the kids turned on him (they tried to storm the drum riser 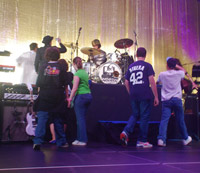 and dismantle Freese’s wardrobe, but between the drum kit around him & the essentialness of constant

drumming during a song – plus maybe fear of security stopping them – they had no luck; Freese was undressed by staff after the song).  It wasn’t the most stellar group of fans – few had 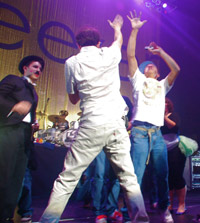 any costumes themselves (which kind of should have been 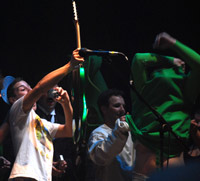 a requirement, to get to go on stage to take off other people’s…), with none standing out save one guy dressed as Charlie Chaplin (note to President Obama: never dress up as Chaplin for Halloween…).  And yes, most of them took photos while on stage, with their little digital point-and-shoots – one guy 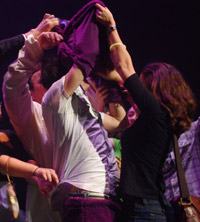 in particular never stopped shooting the entire time (probably doing video): not when Watson handed him his guitar while disrobing (the roadie was quick enough to grab Bell’s), nor when he got a high-five from Cuomo (with that askew hat, maybe the guy was dressed as a douchebag for Halloween – him & the kid in the Yankees t-shirt…).  But some were 100% in the spirit of it, such as faux-Chaplin, or the young lady who yanked the (plush) pants off of a prone Cuomo. 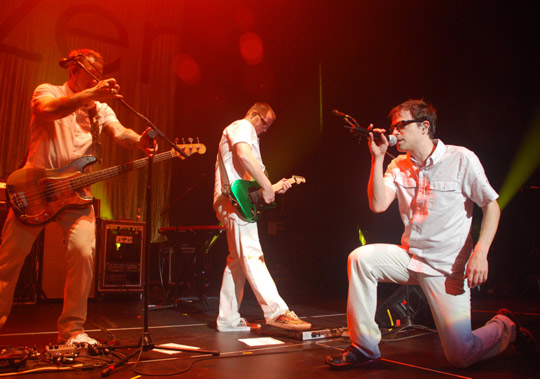 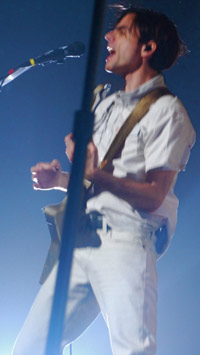 “Undone” was obviously the perfect song for all of this undressing – and Weezer didn’t skimp on the old classics.  Maybe because it was the Saturday before the Tuesday release of their new Raditude (QRO review), and thus it was the longest possible time since their (at that moment still) latest record, Weezer (Red Album) (QRO review – because they’ve had three self-titled records, the Weezers are mostly referred to by the color of their backdrop), but the band hit up all of your favorites from back when, starting with opener “Hash Pipe” from Green, and then “Undone” from debut LP Blue.  In fact, while all seven of their major releases saw some play on the set list (QRO photo), Blue was the record most-played, with five songs – Raditude had three ‘previews’, while no other album had more than two.  2002’s Maladroit particularly got the short shrift, at only “Dope Nose” (and that was sung not by Cuomo, but Shriver – though Cuomo, then back on guitar, had to start it, which he forgot…); one of the two best songs on that record, for sure, but no “Keep Fishin'”?!?  You’d think that the song whose video featured The Muppets would have been perfect for stuffed Weezer… (maybe they were saving up their Muppet-ness for their rendition of “Rainbow Connection” with the characters on next year’s Muppets album). 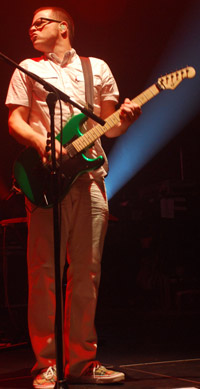 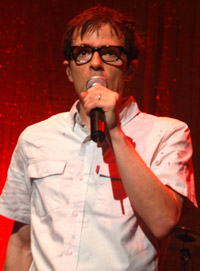 But that’s a minor quibble when the band still plays greats like Blue‘s “Say It Ain’t So”, and still enjoys playing them.  Freed from their plush prison (wearing the all-white that has become standard for the band), Weezer were able to have even more fun, especially guitar-less Cuomo.  He had a mini-trampoline on stage, right in front of the drum riser, allowing him to make flying leaps from & onto the riser.  During third song “Troublemaker”, Cuomo whipped out a football for the Red song’s line about sacking the 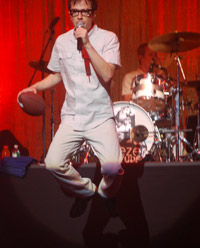 quarterback, and then whipped it into the crowd.  At a later point, he stormed into the (now-empty) photo pit

to greet the crowd face-to-face.  While he wasn’t without his axe for the entire set (Watson sometimes returning to drums, Bell other times taking up the keyboard behind him), Cuomo’s such an effective front man with just the mike, why hadn’t this been done before? 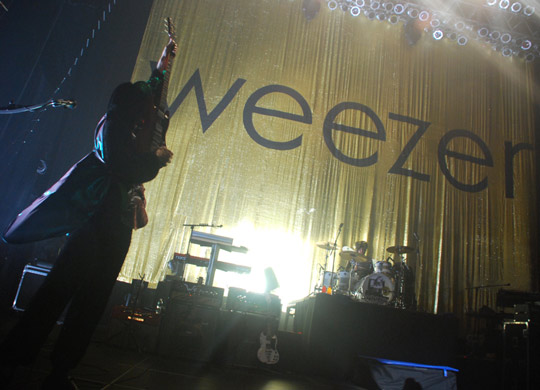 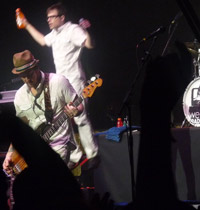 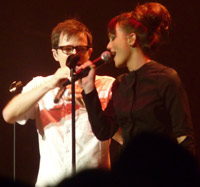 Well, one reason might have been that it necessitated him using a (cordless) radio mike – and there was definitely some feedback screeching a few times early in the set, likely due to the mike’s pick-up & transmission.  But it all helped not just with your old favorites, but especially on the new songs that you’re not so into, nearly each one of which was better live than on record, starting with “Troublemaker”, but also such pieces as “Perfect Situation” from 2005’s Make Believe (Cuomo led the crowd in singing, at one point saying, “Now just the insects…”), and the Raditude tracks.  “Can’t Stop Partying” was obviously lifted by a) being sung at a party, and b) not having the rap from Lil Wayne, but what was really improved from Raditude was the record’s first single, “(If You’re Wondering If I Want You To) I Want You To”.  The incredibly silly-named song (and that’s from a record named ‘Raditude’…) about meeting your girlfriend’s parents, among other things, featured guest duet vocals at Hammerstein from none other than Gossip Girl‘s break-out star, Leighton Meester (Blair Waldorf).  A CW actress trying her hand at singing?  You have every right to be skeptical, especially after her ‘work’ on Cobra Starship’s “Good Girls Gone Bad” (QRO album review).  But Weezer ain’t no poor man’s Fall Out Boy (even though they did tour with Blink-182 – QRO photos), but an established machine.  And live, the actress was able to use what she is famous for, looks & charm, to play off Cuomo. 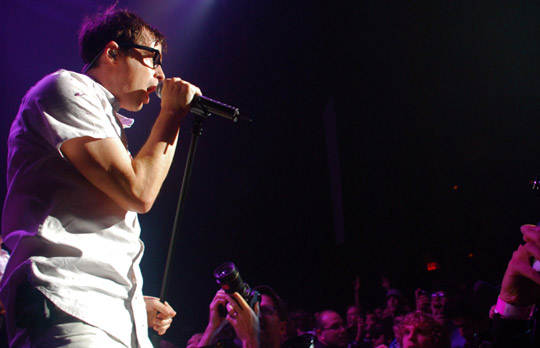 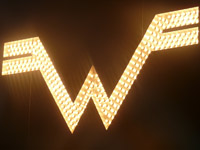 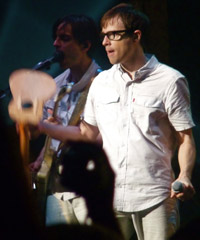 Weezer threw a couple of other curveballs, in addition to the football, costumes, undressing, Gossip Girl, etc.  Early in the set, they covered Black Sabbath’s classic “War Pigs”, while late in the set, the ‘Weezer’ backdrop was dropped, mid-song, to reveal the band’s trademark lit-up ‘W’ (which brought about a lot of their also-trademark ‘W’ hand-signs from the crowd).  Cuomo also destroyed a ukulele at one point, and twice reminded people to set their clocks back.  After the first encore, they returned with a scheduled “Scott/Josh 1 Min Jamb”, and after following that up with “Pork and Beans” (Red‘s best song), Weezer went into a cover medley of “Kids” by MGMT (QRO live review) and “Poker Face” by Lady GaGa (though it wasn’t entirely unexpected, as they’ve been doing that medley on the entire tour, and a recording of it is an iTunes bonus track on Raditude).  That was followed by the band’s second encore break, and then Cuomo returned to the stage, this time alone.  He started playing a few beats/notes on bass & drum, then looping them, so he could do Green‘s “Islands In the Sun” solo – but then had the crowd singing back up. 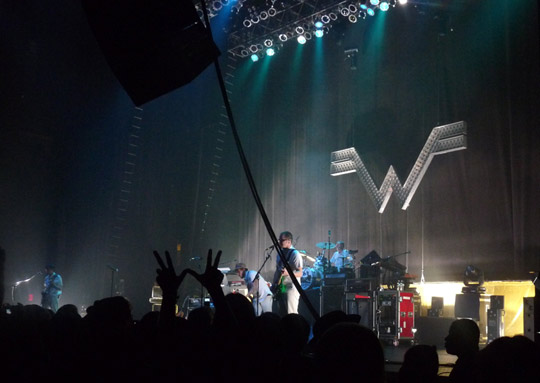 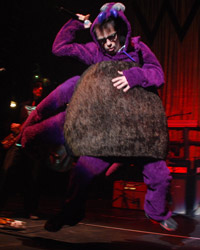 The rest of Weezer returned during “Islands”, and the whole group closed out virtually back where everything began, on Blue‘s second single, “Buddy Holly”.  Going into the Halloween performance, along with worrying about your costume (or lack thereof) & the pouring rain (with Hammerstein confiscating umbrellas!…), one worried if Weezer would or wouldn’t play ‘the hits’.  Not only did they do that in spades, but they also lifted their newer material that you never listen to, and threw in some surprises.  Happy Halloweezer! 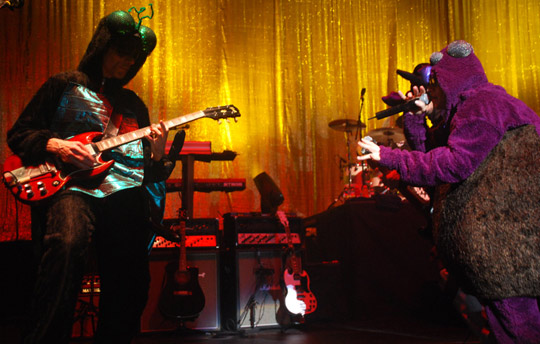