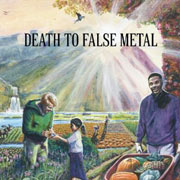 It seems impossible to judge anything Weezer does without framing it in terms of the band’s past, both recent and not.  Any reference to them usually comes with the comment that their mid-nineties start was way better than anything they’ve done in the twenty-first century.  Dig a little deeper, and one has to admit that they’ve gotten better in recent years, if not reaching their former heights.  Your favorite songs are the old ones, and everything else is judged in comparison.  Even the band’s fashion sense is seen in these terms, from changing outfits to singer/songwriter Rivers Cuomo’s ever-present horn-rimmed glasses.  Death To False Metal, a collection of unreleased tracks from throughout the years is just a footnote in that history, if a decent one.

Billed as a full studio album (indeed, it is Weezer’s last with longtime label Geffen, though they’ve already released their first post-Geffen record, Hurley – QRO review), False Metal doesn’t feel like a grab bag of tracks, with no rough recordings and only one cover.  However, it is also a record without a single or even a standout – though also doesn’t have out-and-out bad songs like the last out-and-out bad Weezer record, 2008’s Weezer (Red Album) (QRO review).  “Turning Up the Radio” and “Blowin’ My Stack” are decent enough Weezer party-anthems, and “Trampoline” and “The Odd Couple” decent enough Weezer off-beat love-anthems, but they’re mostly just ‘decent enough’.  There’s an unnecessary auto-tune/reverb/synth effect on “Autopilot”, while the hard-rock “Everyone” is the only song on the record that feels anywhere close to Metal.  Cuomo gets kinda whiney on “Losing My mind”, but kinda catchy boppin’ on “I’m a Robot”.  And closer/Toni Braxton cover “Un-Break My Heart” isn’t quite funny enough to make up for the piece’s obvious overwrought nature, but has some spark of humor.

Weezer has thrown a few curveballs of late, such as the name & album art of their last record being Jorge Garcia’s character on Lost (QRO photo – Death To False Metal could of course use some Lost-iness, but life/death, truth/false, and anything magnetic have always been tricky on the island), or their current ‘Memories’ tour, where they play all of seminal debut Weezer (Green Album) and sophomore Pinkerton (QRO deluxe edition review) in their entirety on back-to-back nights.  However, their collection of unreleased tracks isn’t one of those curveballs – Dead Letter Office, this is not.  Really only for completists, one wonders whether any False Metal songs will ever make it onto a Weezer set list, especially considering the closeness of its release date to Hurley‘s, and the first post-release tour being the ‘Memories’ one.  Still, decent enough.

The New Pornographers : Live in NYC