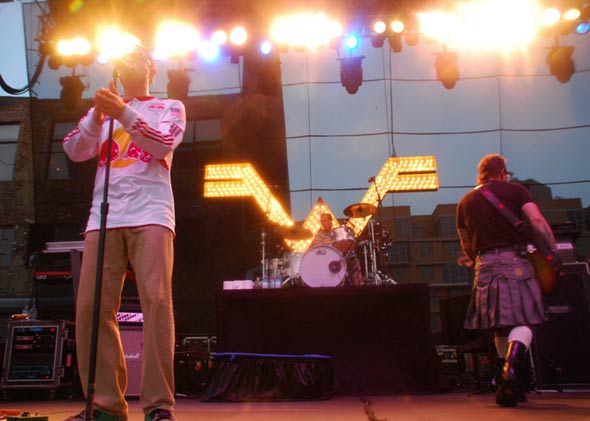 Oh, where to stand on Weezer?  You fell in love with them over a decade-and-a-half ago with their self-titled debut and songs like “Buddy Holly” and “Say It Ain’t So”.  You diligently bought their albums throughout the nineties, but then lost interest some time between 2002’s Maladroit and 2005’s Make Believe, or when frontman Rivers Cuomo went to Harvard.  And you were dismayed by 2008’s Weezer (QRO review – their third self-titled record; each are distinguished by the color of their cover), where Cuomo let the rest of the band have one track each (to poor results), and only had mild feelings about last year’s Raditude (QRO review), which included pieces like “Can’t Stop Partying” and a duet with actress Leighton Meester (a.k.a. Blair from Gossip Girl).  But you still love their old stuff; they’re the kind of band where you still have CDs of them, but have never downloaded anything.  Yet live at Brooklyn’s Williamsburg Waterfront on Friday, July 16th, old Weezer was so good it made you even enjoy the new Weezer. 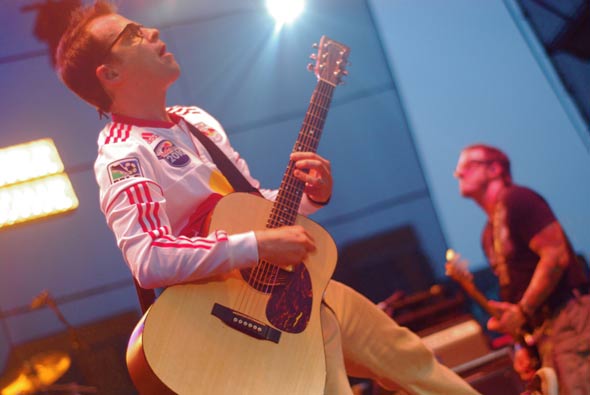 Weezer is a band that should be playing big, outdoor shows, like at Williamsburg Waterfront (QRO venue review); from the mainstream rock fanbase to the giant ‘W’ in lights that rises from behind the drum-kit, Weezer is a ‘big’ band.  Their embrace of this has varied over the years, from Cuomo’s geek-core shyness in the early days to the can’t-tell-if-it’s-ironic-anymore ego-rock on pieces like “Partying” and “Beverly Hills”, or their currently floated idea of going heavy metal (proposed name of the next record: Heavy Mental).  Done wrong, that can be a big turn-off, but Weezer were remarkably able to balance it in Brooklyn, right from the instrumental “Epic Intro” to kick off the show.

Weezer playing “Say It Ain’t So” live at Williamsburg Waterfront in Brooklyn, NY on July 16th, 2010: 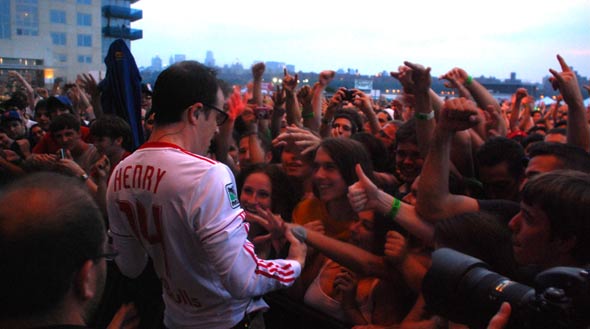 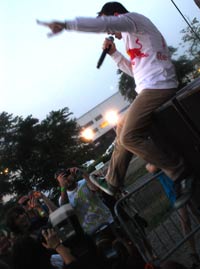 But what made the show great was how Weezer both celebrated their earlier, better material (as opposed to shying away from it, like so many artists do), and adapted & integrated their new stuff.  Old songs “Hash Pipe” and “Undone (The Sweater Song)” were right there in the beginning of the set, but between the two was 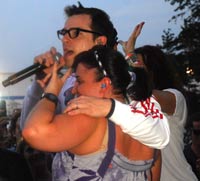 “Troublemaker” from 2008’s red Weezer.  So how did they keep “Trouble” from being a dip?  By Cuomo climbing off the stage and onto the speakers to the house-left (worrying midway that

he wouldn’t make it), then going into the photo pit to embrace the fans up front, sending the photogs into a free-for-all (and embracing one of them, too).  It was a move Cuomo would do again 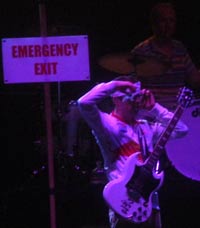 later, this time for house-right, for “Beverly Hills”, and dive into the middle on the excellent old number “My Name Is Jonas”.  Other audience-engaging tactics included bringing the 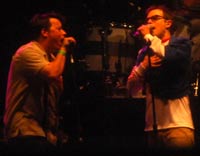 “EMERGENCY EXIT” sign on a poll from the side of the photo pit on stage, bringing out giant beach balls midway through the set, Cuomo wrapping around his head the toilet paper from a roll that was thrown on stage, and, for Raditude duet “(If You’re Wondering If I Want You To) I Want You To”, bringing a fan up to sing Meester’s part – and not a cute Manhattanite or Williamsburg hipsterette, but a guy (proudly) from Jersey (while he didn’t have much of a singing voice, he knew all the words & gave it his all).

Weezer playing “My Name Is Jonas” live at Williamsburg Waterfront in Brooklyn, NY on July 16th, 2010: 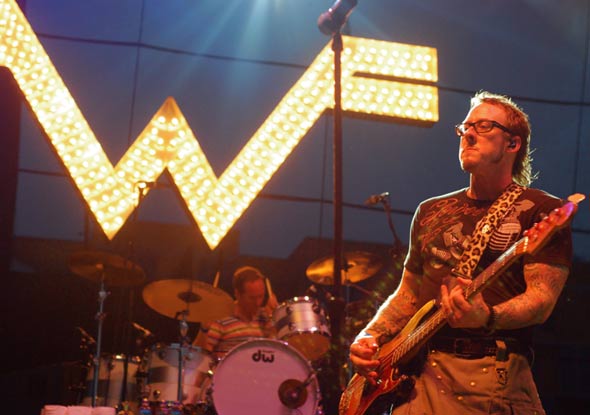 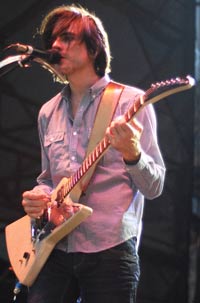 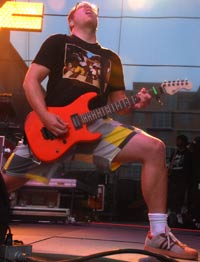 Weezer, the band, has struggled with falling into the ‘Rivers & whoever else’ trap, and giving each of the other three band members a turn at the mike on Weezer (Red) was a bad move, but Cuomo has been balancing it better these days.  Guitarist Brian Bell got to lay down his own “Brian’s Theme” (dedicated to his grandmother, who was turning 102 that day!…), while handing vocal duties over to bassist Scott Shriner for great older piece “Dope Nose” (Shriner was the most badass-looking of the band, even/especially in a kilt).  And drummer Patrick Watson has, for the past few years, played Cuomo’s guitar parts live, letting Cuomo get mobile and Watson rock out up front (though for a few songs he does displace touring drummer Josh Freese, and retake the skins).  And not only did all but Cuomo get to open the night with “Epic Intro”, but also opened the first encore return with some licks from Van Halen’s “Hot For Teacher”. 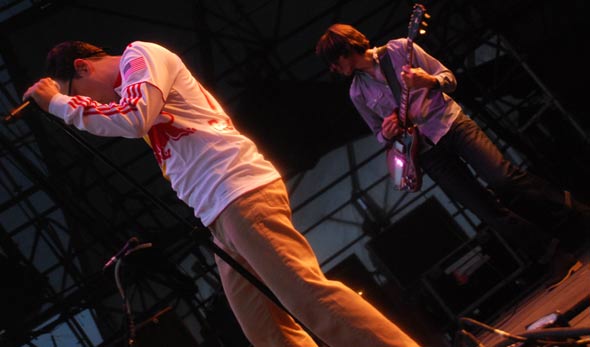 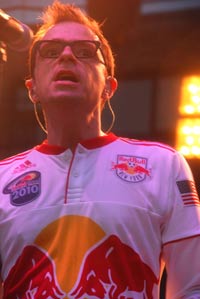 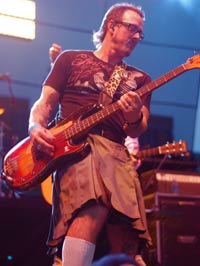 So, did Weezer do their old, great songs, and were they still just as great?  Yes (though could have done “Keep Fishin’” in full, as opposed to in a medley with Raditude‘s “Trippin’ Down the Freeway”, as “Fishin’ Down the Freeway”).  Did they pick the best of the newer songs, such as “Beverly Hills” and Red standout “Pork and Beans”?  Yes (though Raditude standout, “Put Me Back Together”, unfortunately wasn’t on the set list – QRO photo).  Did the old songs, and Weezer, lift the new songs?  Yes.  Is Weezer still great live?  Yes. 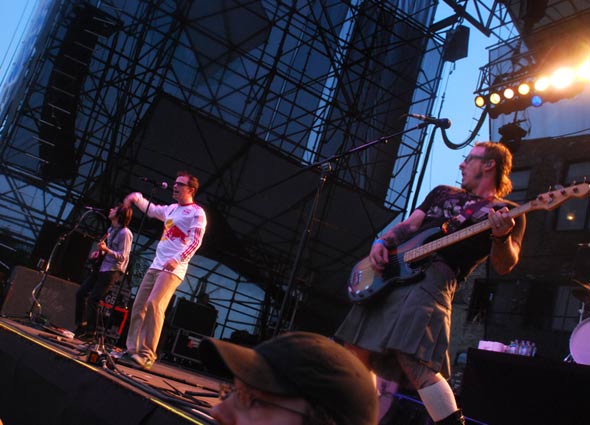