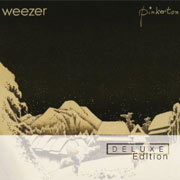 When people say, “I liked their older stuff better” about a band, it usually either means the act’s first record, or material from decades ago (and really no one should use the phrase about the not-old-enough-to-warrant it former case).  People have been saying it about R.E.M. (QRO deluxe edition re-release review) and U2 (QRO deluxe edition re-release review) for years, in reference to their eighties greats.  But Weezer, while they’ve been around for more than a decade, it has been less than two, and yet they’ve received the comment a ton – partly due to their twenty-first century decline, but also due to putting out two amazing records to start, in their self-titled 1994 debut and 1996 follow-up, Pinkerton, the latter of which is getting a deluxe edition re-release.

After all of the hipster-hate that’s been thrown at Weezer over the years, the original Pinkerton still stands up.  Up-rock alt-anthems like “Tired of Sex” and “Why Bother?” set the tone in the first half, but it is the back side to Pinkerton where it reaches its peak.  Singer/guitarist Rivers Cuomo is already singing about getting old in “The Good Life” (way better than his later-career singing about being famous), and “Pink Triangle”, which, while undeniably bro-ish, is actually a pretty damn great song about being in love with a lesbian (“If everyone’s a little queer / Why can’t she be a little straight?”).  “El Scorcho” is one of the most fun songs this fun band has ever produced, bringing home the turkey and the bacon, while “Falling For You” kind of encapsulates Pinkerton as a whole.

But you already knew all of that.  The real interest in a deluxe edition re-release, especially of a record that’s only fourteen years old (those original Pinkerton CDs will still work on iTunes), is in the bonus tracks.  B-sides like “Devotion” fit Pinkerton-era Weezer but don’t really add anything to it.  Radio remixes of “The Good Life” and “Pink Triangle” sound exactly the same as the originals, while rough trackings of “Tired of Sex” and “Getchoo” sound, well, rough.  However, there are some enjoyable live renditions, especially the acoustic ones where you can hear the crowd squealing (especially the definitely-not-lesbian girls screaming for Cuomo during a stripped-down “Triangle”).  Unfortunately, the live tracks are too weighted towards “Good” & “Triangle”, making you hear the same song a few too many times – there should have been more live “Scorcho”; the rendition at Reading Festival makes the case for it being the best song on Pinkerton.

There is some previously unreleased material, such as grand procession “I Swear It’s True”, kind of overwrought “Long Time Sunshine”, and the more epic “Tragic Girl”, the best of the unreleased songs.  Best of the unreleased songs, that is, as Pinkerton (Deluxe Edition) also contains a hilarious radio interview with the band, where a call-in fan asks why the band went for a rougher sound with Pinkerton, compared to the first, Weezer – or, “Why was your first album so perfect … and your second album, so… not?” (a band remember replies with an excellent, “Dude…”)

Weezer recently left longtime label Geffen with the new Hurley (QRO review), and announced a ‘Memories’ tour, where they play two dates – one all of Weezer, one all of Pinkerton.  If their first two records are better than anything they’ve done since (though both were sorely lacking in Jorge Garcia-related material, dude…), they’re hardly the only band to suffer that ‘I like their older stuff more’ curse, even if it’s been a particularly sharp decline.  The Weezer vs. Pinkerton debate still rages as well (and will throughout the ‘Memories’ tour) – we really need a deluxe Weezer to fully compare with the deluxe Pinkerton (hint, hint…).