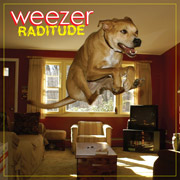 Weezer’s alt-rock was never really that ‘alt’.  Back in the nineties, the L.A. four-piece were something of an ‘alternative success story’, with radio-friendly hits like “Undone – The Sweater Song”, “Buddy Holly”, and “Say It Ain’t So”.  Singer/guitarist & songwriter/frontman Rivers Cuomo’s somewhat geeky, horn-rimmed glasses look didn’t hurt (especially when singing “Buddy Holly”…).  But all of those who fell in love with band in school, growing up has not grown the love – somewhere around 2003’s “Beverly Hills”, Weezer became just another rock band in alt-eyes.  By last year’s Weezer (QRO review) – the third record to be named that, and thus also known as ‘The Red Album’, thanks to its backdrop – it had blossomed into full-on disdain.  That the first two Weezer records were much-loved ‘classics’, especially their debut ‘Blue Album’, only intensified matters.  And Cuomo had gone to singing a little too much about being famous – nothing will quicker kill your ‘indie cred’.

But if you actually go back and listen to those older records, like The Blue Album or Pinkerton, you’ll find that Weezer never really was that ‘alternative’.  Maybe for the time, in the post-grunge late nineties, when hip-hop was bursting onto the scene & hogging the glory, while those raised on R.E.M. (QRO album review) & Nirvana (QRO DVD review) had precious little to choose from, Weezer’s straight-faced emotion in their rock seemed alternative enough.  But in the post-file sharing, post-iTunes twenty-first century, an act that’s been on a major label for fifteen years like Weezer seems pretty mainstream, even if they didn’t change that much.  And their latest, Raditude, is very much in that vein.

One major, standout flaw on The Red Album were the tracks where Cuomo let the rest of his band contribute to songwriting, for the first time in the band’s history; even on a relatively unimpressive record, those pieces stood out – in a bad way.  Cuomo has kept the door even more open on Raditude, including even non-band members like producer Jacknife Lee, but it all is better organized this time, with Cuomo better balancing.  Only one piece, the penultimate “In the Mall”, wasn’t at all penned by Cuomo, and the more guitar-rock & -grind track, written by drummer Patrick Wilson, doesn’t stand out in either way.

That is, however, the main problem with Raditude – very little ‘stands out’.  Pieces like the preceding “Let It All Hang Out” feel like ‘paint-by-the-numbers Weezer’.  Cuomo’s emo is nice enough, but hardly revelatory, on songs like the opener/single “(If You’re If I Want To) I Want To” (up there with “Do You Wanna?” by The Kooks – QRO live review – in ‘cheesy song titles about young people nervous about having sex’), “I’m Your Daddy” (hopefully isn’t about young people nervous about having sex…) or “Love Is the Answer” (as cheesy as the title, and randomly contains a Bollywood vocals/sitar solo…).  Even the ‘Whoa-hoa-hoa’ rock of “The Girl Got Hot”, or the more relaxed strum-rock of “Trippin’ Down the Freeway” isn’t amazing, just enjoyable.

At least The Red Album‘s songs about being famous were memorable, if in the wrong way.  There’s only one of that ilk on Raditude, “Can’t Stop Partying”, a guess-it’s-a-mockery/commentary-on-the-high-life? piece, which even features a guest-spot rap from Lil Wayne.  But even there, “Partying” is neither as bad, nor as special, as its description.

The following “Put Me Back Together” is Raditude‘s best stab at ‘classic’ Weezer, but it’s just a better version of the more run-of-the-mill tracks on the record.  But that’s because Weezer was never really a serious ‘alt-rock’ band, just a rock ‘n’ roll outfit with emotion & some alt-tendencies, which hit a certain alt-crowd in a certain alt-time in certain their alt-lives.  Weezer hasn’t changed – you, and the world, have.

MP3 Stream: “Put Me Back Together”