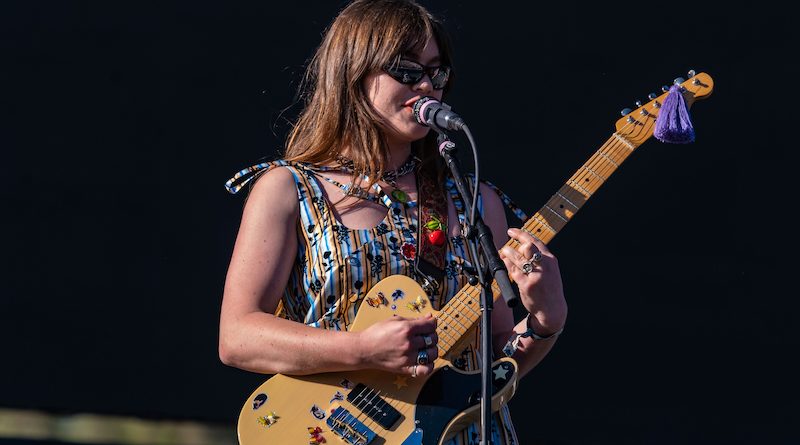 Click here for photos of Wet Leg at 2022 This Ain’t No Picnic in Pasadena, CA in the QRO Concert Photo Gallery

Click here for photos of Wet Leg at Phoenix in Toronto, ON, Canada on August 2nd, 2022 in the QRO Concert Photo Gallery

Click here for photos of Wet Leg at 2022 Lollapalooza in Chicago, IL in the QRO Concert Photo Gallery

Click here for photos of Wet Leg at SXSW 2022 in Austin, TX in the QRO Concert Photo Gallery

Most self-respecting people do not actively sit down and resignedly pull on a clodhopper of a life on purpose. Even the least motivated of us generally make an effort to put our best foot forward in whatever has made our hearts pound and that which we would like to make our wallets round in the process. Sometimes the best we can do is be solipsistic and sad about silent dreams, and sometimes the stars align, stressfully on time. Precious few of us can boast of having had a glass Manolo fitted onto our outstretched, field-frolicking foot with quite the hare-wing hurry that Hester Chambers and Rhian Teasdale of Wet Leg have since releasing “Chaise Longue” (QRO review) in June of 2021, essentially to entertain themselves inside the sacristy of their soul-sisterhood. When they brought their psychedelicized kickpleats and kismet to Atlanta’s Variety Playhouse on Sunday, September 4th, their carefree amusement gave whirlwind way to our continuous amazement as they mercilessly dropped banger after banger, easy as a windlass into a well.

Wet Leg’s eponymous debut full-length (QRO review), out on Domino Records as of April 8th, is suffused with a discursive, dunkel-beer dreaminess and, taken as a whole, feels very like walking through a sticker arcade designed by Sarah Silverman. Chambers and Teasdale can sing you all the tufted reasons why a given lad is justifiably cute and why, as such, they just might go there if the mood strikes them within the same sentence (and sometimes the same syllable!) via which they gralloch the dross in his character with a laser form of facility doused in implied boredom that would bring a tear to both Camille Paglia’s and Tawny Kitaen’s eye. These are the best poet priestesses of the seldom-trod purslane-to-prickly pear pathway rock music has seen since Heart.

There are untold volumes to write on the slipshod subject of the new-leaved branch of feral feminine primogeniture avoiding any and all preassigned ‘frock rock’ labels brought to market (as well as to heel) by Wet Leg. To become a protectoress and the lived ideal of something so sacred and so simultaneously new/ancient on purpose would be about as sensible as a cactus vibrator or a vertical turtle. To do it accidentally like Wet Leg has done just makes you a perigee-moon kind of mystical. That Hester Chambers and Rhian Teasdale accomplish all of this while non-ironically wearing Laura Ingalls dresses and singing about how laughably simple it is to become the star of the male spank bank show is to understand something crucial about Wet Leg’s peart womanly appeal, to both sexes and for all persuasions.

To fully take it in, one would need to think of a piece of art on the level of Man Ray’s Le Violon d’Ingres, which recently became the most expensive photograph ever sold at auction. The black-and-white image of a woman whose nude back has been scored with the f-holes of a violin went for $12.4 million at Christie’s. The reason for that is the same reason that the Atlanta stop of Wet Leg’s ongoing tour saw women of all ages, and men of all stripes, out in numbers that the Variety Playhouse could barely host without hospitals getting involved. It was sweltering hot and sardine-packed.

It was also the first time in 35 years of loyally attending shows there that this word-wender has ever seen the staff close the standing room area due to capped capacity. Numbers rarely lie, and when they do, it is for the greater good. This time they told the bold truth: Wet Leg is already beyond ready for rooms three times the size of what they are playing – spaces I have no doubt they will walk in and sack with their selkie-shorthand by this time next year or sooner.

Dressed like vaguely-Scandinavian rush-bearers in vintage dresses blooming with yucca, the kind of interior and exterior beauty embodied in Chambers and Teasdale calls to all corners of the curiosity shop that is femme allure, and they do so with a kind of unbidden, well-tressed sublimation that is suitable for sarcophagi lids in its primeval regality. That they have designed for themselves such a powerfully man-less maisonette in so short a time would be monumentally impressive even if the pluripotent monoculture of the internet did not exist. That they have done it despite that grisly gallery of gash and grievance is not just heartening but exhilarating.

Barreling directly into “Being In Love”, the Wet Leg girls could not be any more ravishingly Celtic if they came astage draped in bronze neck torques and loden stoles. And yes, this peering penwoman is suggesting they absolutely should do that at some point because doing so could only make them that much more impossible to look away from. All hail and long live the power of the female gaze.

It is during their untaxed delivery of “Wet Dream”, as you listen to them deftly decoding the demonology dictionary of modern-day dating, how rife it is with limp half-men who are as tetchy and two-footed as George Best – only nowhere near as attractive or ambitious – that the vasculature of Wet Leg’s vim is most glaringly apparent. Inside the infraorder of neo-grunge women who channel Little House on the Prairie as comfortably as they do an Isle of Wight-incurvated Letters to Cleo by way of Liz Phair, Wet Leg currently stand utterly alone in their age bracket for being a dual-woman-led rock band with an acervation of accolades associated entirely with the ingenious insularity of their aesthetic, both sonic and visual.

Everything from the Wet Leg band logo to the Sound of Music-meets-hipper-Herself-The-Elf of their album art and video visuals screams “You’ve not seen any quite like us before.” Nowhere is this more manifest than in marvelously molly-mawking songs like “Piece Of Shit” and “Convincing” – songs so true to the everygirl-experience of moody marmite men as to feel like physical places in one’s own emotional map living outside one’s body. These are girls who clearly fully grasp that every single belgard is ultimately a bitch, and that boys will mistake a whirling dervish of whimsy for a wanton every damn time it suits their scapegoating hearts.

Other standouts in Atlanta included the forcefully fun “Supermarket” and the energetic ennui of “Oh No” – both of which sent the ATLien Wet Leggians all the way Pogo-Supersoaker for the duration. “Too Late Now” (QRO review), which just got its own Soulwax Remix, took the crowd someplace hailable only by hydrofoil, while “Angelica” (QRO review) was a shimmering-subfusc of a sensation, thanks in no small part to the unexpected volume provided by Joshua Omead Mobaraki on guitar, the bass stylings of Ellis Durand, and Henry Holmes behind the kit. Be not fooled by any silly ideas you have uninvitedly imbibed from their aromatic aster image: Wet Leg is a loud band with a playing volcanicity that would cow Io.

Sneering with a derisive yawn at the quiet, jeer-worthy, head-petting patriarchy of the contemporary rock scene wherein hilarious little boys make the even-more-hilarious assumption that they must always be the musician in the room, “Ur Mum” shows them otherwise in the most meta of ways – curling its lip at the arrested development ass-clowns in the context of a rock-pop song too cohesive and lyrically adroit to ever be written by any of them. The experience of this song in the wild is like voluble Rayleigh scattering, both Wet Leg woman-wonders singing like they are swallowing flame. Poor, wee His Nibs everafterward. He’ll never walk the same again.

So often, a colorful name or the side-eye application of what has been perceived by the puny politesse of society as a ‘suggestive’ title is nothing more than a distracting loanword standing in for an originality-harpoon. Not so with Wet Leg. Any self-actualized and truly free wolf-woman of the world will tell you in a New York minute that no man is worth keeping if he does not keep your leg wet. Take that biological fact how you will or avert your puritanical eyes from it; it will stay viscerally true either way, and in all ways that it can be interpreted. The same can be said of bands that do not sweat or girls that do not guffaw loudly in public, sometimes even with taunting raillery.

In Wet Leg you get all of the above, and a far deeper feral-female reason to keep listening. People in the mass populace would still more readily discuss reality-TV-level-pointless topics such as ‘quiet quitting’ or ‘looking respectfully’ than they would a septate hymen – women’s bodies and experiences still being regarded as that mysterious, that dangerous, and that taboo. The gamines-in-gabardine of Wet Leg make singing about these things a party on a calico picnic blanket, and one at which you are encouraged to help yourself to all the anarchic-libido-walking-a-piratical-gangplank as you can manage. Bring your own chaise longue and no fuckboys allowed.