While ‘buzz band’ sounds like something from early nineties MTV, ‘internet buzz band’ is very much a thing in 2021... 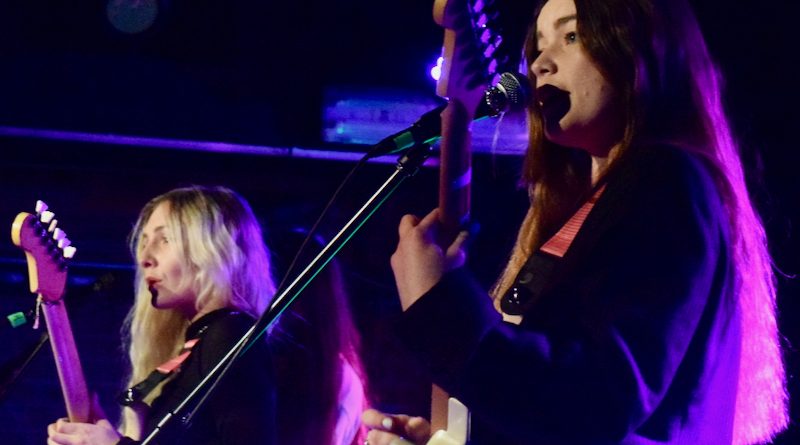 While ‘buzz band’ sounds like something from early nineties MTV, ‘internet buzz band’ is very much a thing in 2021. Admittedly, the ‘internet’ portion means that it can be quite fleeting, a single you were in love with for a week or day, before something new came up the next week or day. There are successes, but for every Little Nas X & “Old Town Road” there are many, many who are relegated to the dust buzz bin of history. And, admittedly, a lot of those acts deserve it, or at least can’t follow up their one piece that was sweet. Thankfully, current buzzy band Wet Leg are more than just their killer “Chaise Lounge” (QRO review), and showed it when they came to New York’s Mercury Lounge on Wednesday, December 7th.

This was certainly a ‘industry buzz band show,’ something the small but not dingy Mercury Lounge (QRO venue review) has long specialized in, going back to the early aughts ‘return of rock’ heyday of the Lower East Side. This was the first of three sold-out small NYC shows by Wet Leg, and being the one in Manhattan, was the most music biz, with many industry folks getting their show legs back (including your correspondent) and a maxed-out guest list (even StubHub couldn’t help). But there were just a ton of people there in general, the crowd spilling all the way back to the back bar, squeezing to see through the doorway. And, interestingly, the crowd had a heavy grey hair contingent (your correspondent bumped into one man’s cane), with perhaps the early show set times (all over before 9:00 PM) helping to bring them out, though they were mostly at the bar for the charming opening set by JW Francis (QRO photos), who himself admitted he was there to see Wet Leg, just like the crowd.

It all rather amazed Wet Leg’s Heather Chambers and Rhian Teasdale, who seemed to be surprised that people even bought tickets. They said they were jetlagged, as they only got in the night before from their native England (indeed, there were no t-shirts on sale at the merch table, still stuck in transit). On stage, they’ve got a Phoebe Bridgers-like mix of mature straight face and youthful embarrassment, Teasdale more the former, Chambers more the latter, and were ably supported by an exciting backing band & roadie.

The trick with being a new band playing off a hyped single is that you have to play all these other songs – that people don’t know. Debut full-length Wet Leg has been announced, but doesn’t come out until April, and it’s easy for the crowd, particularly a jaded NYC crowd, to just be there to hear the hit, with eyes & ears glazed over until then. Wet Leg did just release another great single and video, “Too Late Now” (QRO review), which they wisely started with – and yes, “Chaise Lounge” was left until the very end. In between were pieces like the early, poppy fun of “It’s Not Fun” and “Ur Mom” and sly “Wet Dream”, later more of a rocker with “Loving You” and angular rock of “Oh No”.

Plus, you wouldn’t be an up-and-coming new band without at least one great cover, and Wet Leg brought it with Talking Heads’ “Psycho Killer”. It worked for NYC, it worked for all the grey hairs, it just worked. That went into the penultimate indie rock “Angelica”, before the finish, of course, “Chaise Lounge”, the catchy procession that you want to listen to “all day long.”

The next night, Wet Leg played Brooklyn’s Union Pool (QRO venue review) – and appeared on Late Night with Seth Meyers, where the host noted that “Chaise Lounge” is NPR’s #2 song of 2021, “And Seth Meyers’ #1 song of 2021, which is more of an honor!” There’s one more NYC show at Baby’s All Right (QRO venue review) on Thursday night, before similarly small, sold-out California shows – and opening slot for CHVRCHES out there. But Wet Leg will tour their native U.K. in 2022, before coming back to America for a full tour (including March 10th at Music Hall of Williamsburg – QRO venue review – and the return of Austin’s South-by-Southwest), with Wet Leg out April 8th. Get your tickets now, because the buzz is still buzzing.