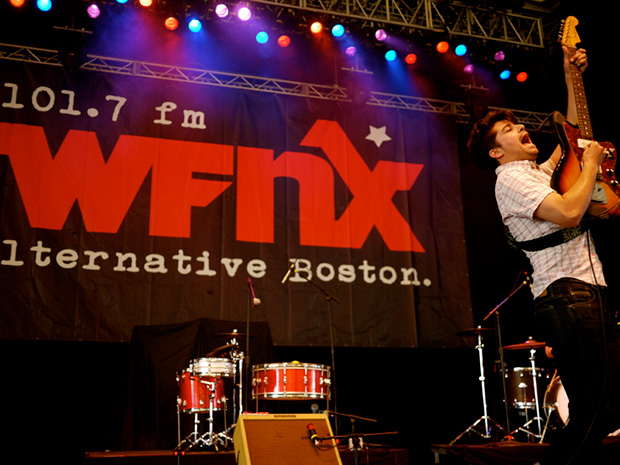 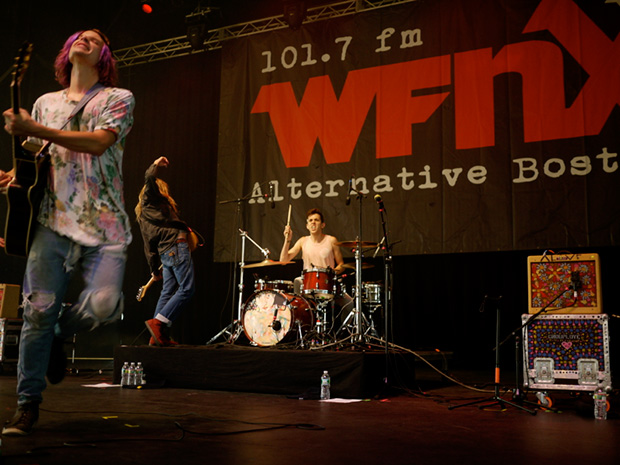 Music, beers, smiles, and yelling were all present.  Good times were had. Would ‘FNX have it any other way? This is what they lived off of for 29 years.  If there was any way to go out, ‘FNX nailed it.  Future radio stations take note.

The show started at 5 p.m. with Stephie Coplan & The Pedestrians taking the stage, as those with tickets rushed from work, through the heavy commuter traffic, to Boston’s Seaport District.  The crowd had been slowly filtering in throughout the set and it wasn’t until “Jerk”, that the crowd showed its first signs of life. 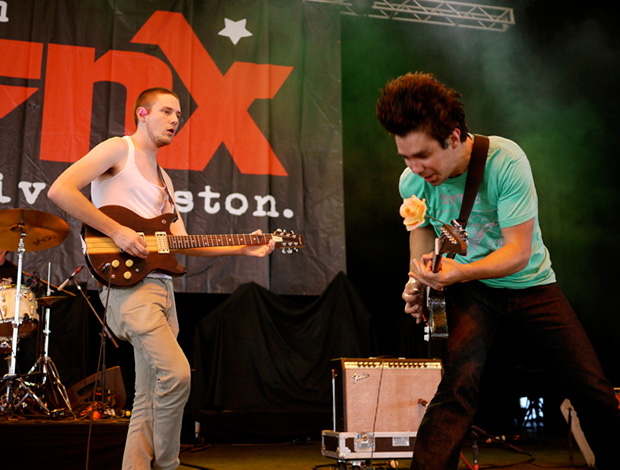 Click here for photos of Reptar at Bowery Ballroom in New York, NY on April 14th, 2012 in the QRO Concert Photo Gallery

Click here for photos of Reptar at 2011 Governors Ball on Governors Island in New York, NY in the QRO Concert Photo Gallery

Click here for photos of Reptar at Double Door in Chicago, IL on June 15th, 2011 in the QRO Concert Photo Gallery

Quickly following was Athens, Georgia based band Reptar.  If you’re looking for a fun, dance happy quintet who aren’t afraid of getting a little weird on stage, you found the right band.  Singer and guitarist Graham Ulicny wanted to make sure everyone knew Reptar was there to send off ‘FNX the right way.  “There’s a rule here but we’re making a new rule,” yelled Ulicny. “Fuck seats. If you’re having fun, come up front and if you’re not, go in the back and drink beer. If they try stopping you, run!”  This threw the then mellow crowd into a frenzy, rushing towards the stage and panicking all security personnel.  In the end, the majority ruled and nearly everyone in the venue at the time had been only feet from the stage. 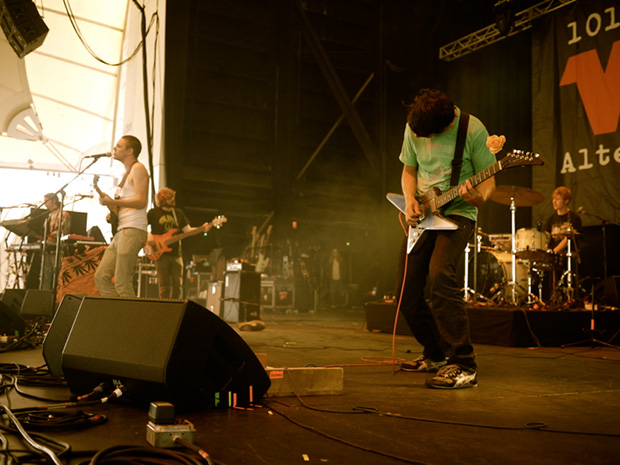 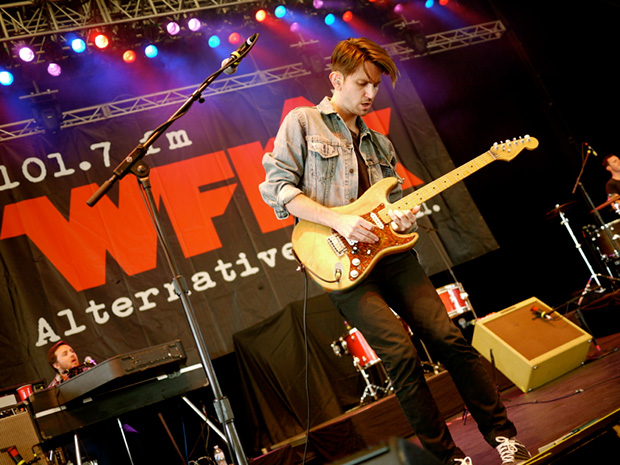 Click here for photos of Delta Spirit at SXSW 2012 in Austin, TX in the QRO Concert Photo Gallery

Click here for photos of Delta Spirit at Webster Hall in New York, NY on November 23rd, 2010 in the QRO Concert Photo Gallery

Click here for photos of Delta Spirit at 2010 Harvest of Hope Festival in St. Augustine, FL in the QRO Concert Photo Gallery

Like a few other bands from this night, Delta Spirit journeyed up from that music festival on a hot Tennessee farm (QRO Festival Guide).  Yes, even Bonnaroo couldn’t slow these guys down.  The five-piece rootsy rock band played favorites “Empty House”, “Tear It Up”, and “Idaho” before closing out with their latest single, “California”, a simple, upbeat song that will have anyone longing for summer.

In true ‘FNX fashion, some of the longtime radio DJs (Paul Driscoll, Julie Kramer, Henry Santoro, Adam 12) made appearances on stage to introduce each band and show their appreciation to listeners.  This is what made WFNX so special – the DJs.  Seldom do you find a group of people that are so passionate about music and what they do, that they become overjoyed when they are able to interact with listeners and share the newest unknown band that eventually sells out venues. 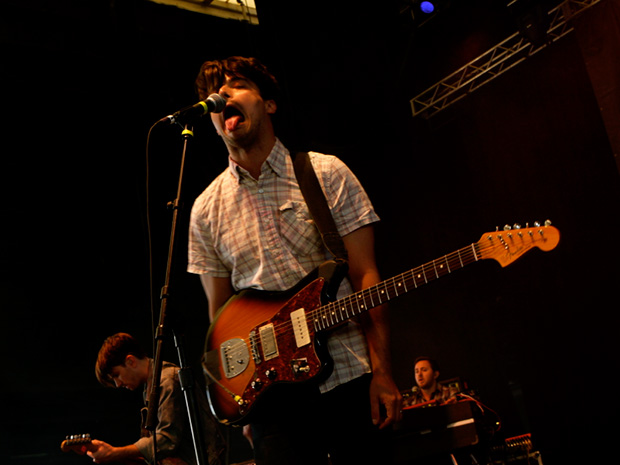 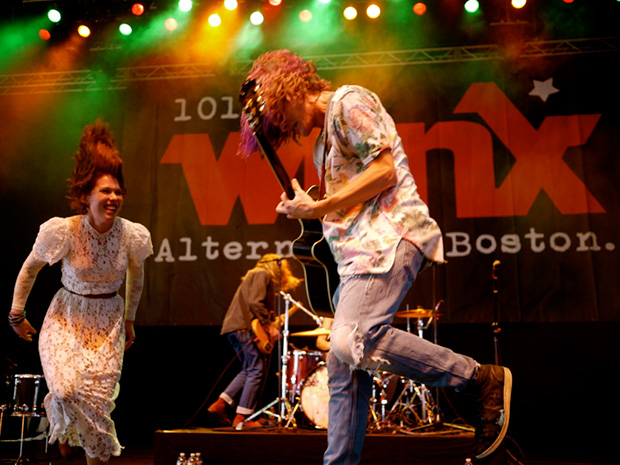 The band that seemed to become huge overnight, Grouplove rivaled the remaining acts of the Seaport Six by easily bringing the most energy.  Opening with “Lovely Cup”, the head-banging duo of Hannah Hooper and Christian Zucconi set the tone for the remainder of the set, as Andrew Wessen, Sean Gadd, and Ryan Rabin lined each song with punch after punch.  It was a rare moment to see any of the five band members not constantly running around the stage.  Fans were only able to gather their composure during “Slow”, a Hooper heavy lead dream track.  Of course this didn’t last long, as the band jumped into fan favorite “Tongue Tied” with a little cover of Whitney Houston’s “I Wanna Dance With Somebody” sprinkled in at the end. 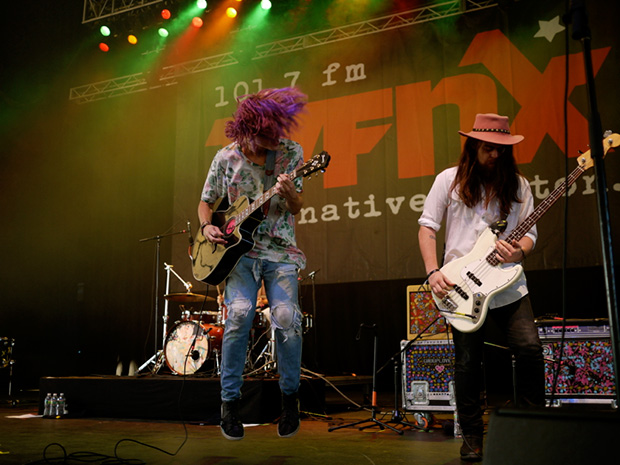 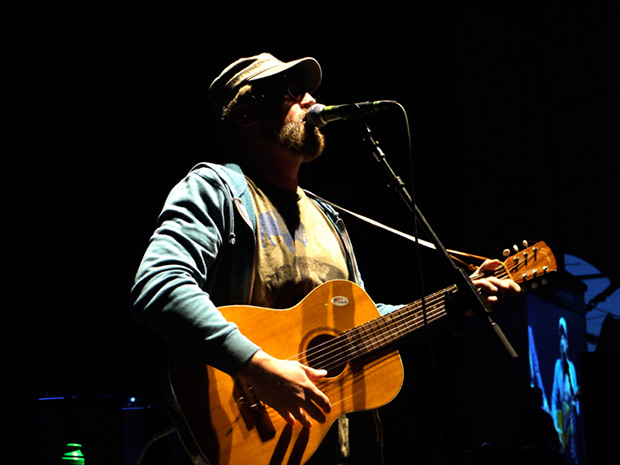 Click here for QRO’s review of CAKE at Roseland Theater in Portland, OR on February 13th, 2011

CAKE kept the dancing going as frontman John McCrea divided the crowd into sections and ordered each side a part to sing.  “Long Time”, “Short Skirt/Long Jacket”, and “The Distance” received the biggest approval from the crowd.  At one point, McCrea played with the crowd by asking how much more important business was than culture.  That was before reminding those in attendance that they were in fact at the Bank of America Pavilion. 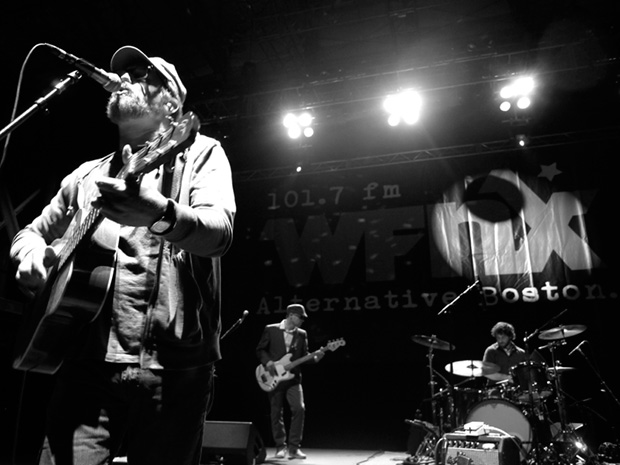 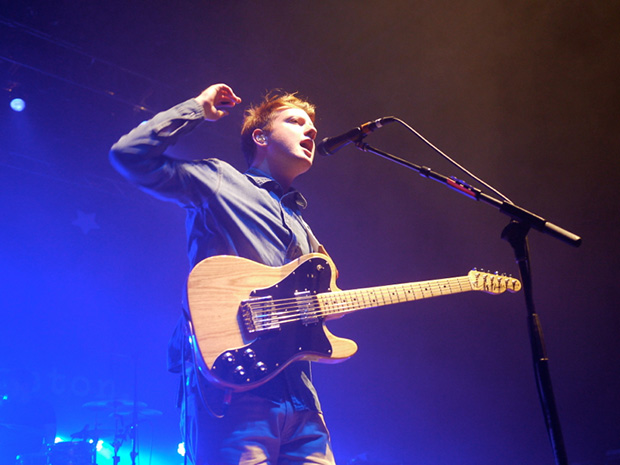 Finally, just before 10 p.m., headliner Two Door Cinema Club blinded nearly all in attendance with strobe lights, providing only short bursts of light on the silhouettes.  The boys from Ireland played favorites “Undercover Martyn”, and “Something Good Can Work” before paying homage to ‘FNX as the first U.S. radio station to play their music and help propel them in America.  Alex Trimble, Sam Halliday, and Kevin Baird then gave the station its final send off with their dance pop single “I Can Talk”. 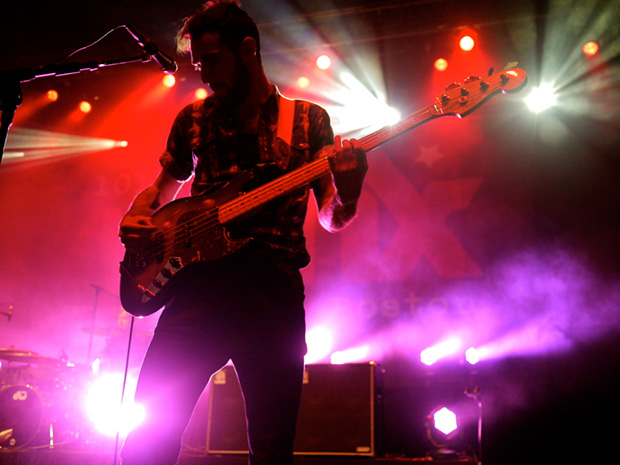 It’s clear this wasn’t just a radio station.  Fans and bands alike realized this.  It was a culture that made the Boston music scene one of the best in the country.  It had personality – in the sense of the DJs but also in the sense of taking pride and appreciating the music played.  It gave local acts, on the late night show Boston Accents, a chance to be heard while also helping a wave of fame come over larger acts such as Radiohead and more recently Foster the People.

This wasn’t a somber six-hour wake.  Instead, it was a celebration of three decades worth of passion, stemming from crew and listeners, which delivered a vast array of music and became a rock in the independent music scene. 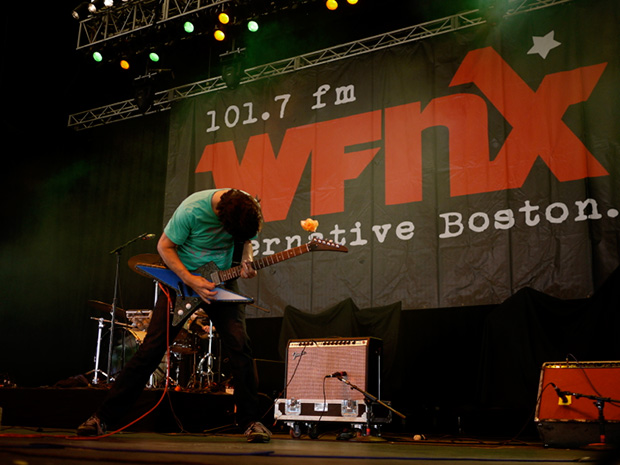