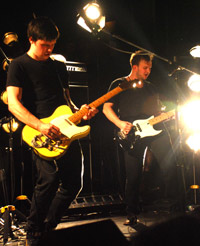 Has toured with: Asobi Seksu, The Chevin, Coldplay, Crocodiles, Florence & The Machine, Friendly Fires, Glasvegas, In the Valley Below, Kings of Leon, Frankie Rose, The Soft Pack, Sun Airway

Review of To Lose My Life

Interview with Harry McVeigh in 2009

Review as part of Main Square Festival in Arras, France on July 2nd, 2011

Review as part of Bingley Music Live in Bradford, U.K. on September 2nd, 2012

Interview with White Lies in 2013

Live review at Roseland Theater in Portland, OR on April 22nd, 2014

Live review from Music Hall of Williamsburg in Brooklyn, NY on February 2nd, 2017

Interview with White Lies in 2019

Photo gallery from Irving Plaza in New York, NY on May 2nd, 2019

White Lies playing “Farewell To the Fairground” at Terminal 5:

White Lies playing “Bigger Than Us” at Terminal 5:

White Lies playing “To Lose My Life” at Bowery Ballroom on October 3rd, 2013: