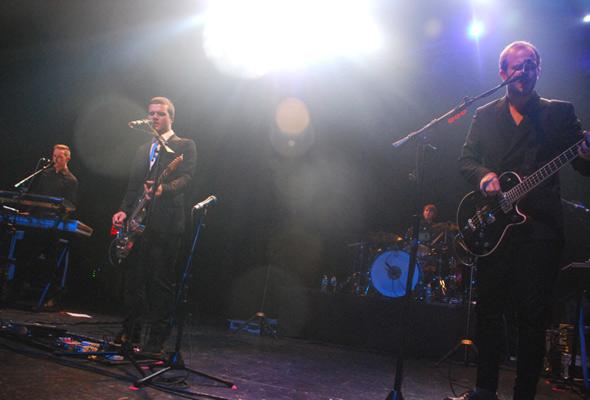 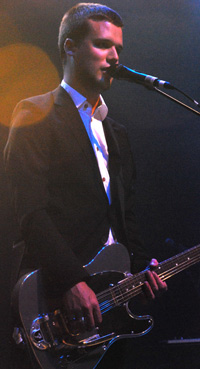 Even though the rapture didn’t come on May 21st, we still live in often epic and tragic times, and there are many great bands that reflect it, such as the neo-New Wave of Interpol (QRO live review) to the wrought indie-classical strains of The National (QRO spotlight on).  However, while driving, bands like those can still be downers live, as epic tragedy is, well, a downer.  That’s what made White Lies’ Thursday, May 19th show at New York’s Terminal 5 such a standout – an epic, tragic show that was also fun.

The handsome English lads (especially in their blazers) do have a younger and more female fan base, a higher-spirited crowd than most tragic shows.  And the lads themselves were in high spirits, with singer Harry McVeigh thanking the crowd and expressing surprise that so many showed up (admittedly, it wasn’t a packed Terminal 5 – QRO venue review – the second balcony was closed, and it wasn’t wall-to-wall on the main floor; still, that just made for a more enjoyable

show, as Terminal 5 can be a pain when sold-out).  They’d originally been scheduled to play the smaller (but still sizeable & classy – QRO venue review) Highline Ballroom in January, only to cancel thanks to one of this winter’s numerous snowstorms postponing their flight from Los Angeles after playing Tonight Show with Jay Leno (QRO Indie on Late Night TV).  So playing Terminal 5, in only something like their fourth or fifth visit to the Big Apple (and all the way up from Mercury Lounge – QRO photos), was certainly an event to celebrate.

White Lies playing “Farewell To the Fairground” live at Terminal 5 in New York, NY on May 19th, 2011: 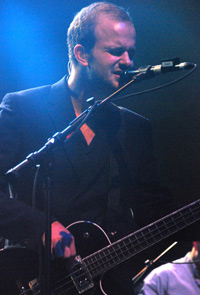 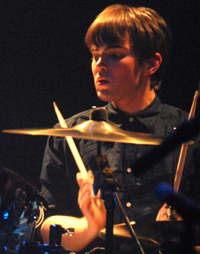 Not that White Lies are a ‘celebratory’ band.  From opening number “A Place To Hide” onward, the band wrought tragedy throughout the concert hall.  The set list was naturally balanced between their two full-lengths (playing Terminal 5 after only two albums!…), 2009 debut To Lose My Life (QRO review) and this year’s follow-up, Ritual (QRO review).  And, just as how Lose is superior to the slightly-too-similar Ritual, so were the Lose songs better on average than the Ritual ones – but only on average.  Ritual‘s “Holy Ghost” stood as tall as the preceding Lose‘s “Place To Hide”, while “Is Love” from Ritual was perhaps even better than Lose‘s following “The Price of Love” (and Ritual‘s “Bad Love” later in the set wasn’t too shabby, either).  Even if Lose‘s “Farewell To the Fairground” was bookended by the two weakest songs of the night, Ritual‘s “Streetlights” and “Peace & Quiet”, main set-ending single “Death” from Lose was more than matched by the encore break/evening closer, Ritual‘s “Bigger Than Us”. 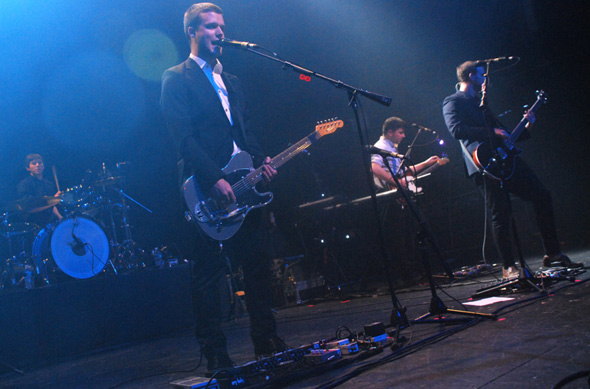 In a world that can bring you down, where the happiest that you get is at someone else’s Death (QRO EP review), even the best-played darkness can sometimes be, well, too dark.  That’s why it’s so great when epic tragedy is married to enjoyment without losing skill, such as with White Lies.