<i><img src="http://www.qromag.com/wp-content/uploads/2011/01/whiteliesritual.jpg" alt=" " />Ritual</i><span style="font-style: normal"> may not be the definitive album for White Lies, but it marks an important turn in the group's sound.</span> ... 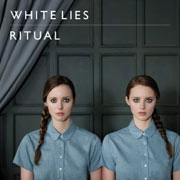 More upbeat and diverse than their previous album To Lose My Life (QRO review), Ritual is a mixture of synths, bombastic choruses, and pounding percussion.  White Lies were already endlessly compared to bands such as Joy Division and Editors (QRO album review) during the first album’s release, and Ritual will only amplify those resemblances.  An ‘80s pop sensibility can be heard throughout the record’s ten tracks.

Several songs, such as the opener “Is Love” and “Turn the Bells”, show how the British trio is experimenting with new styles.  Hints of industrial rock (such as Nine Inch Nails and Faust) can be heard on “Turn the Bells”.  “Is Love” starts off like any other White Lies song, but shifts into a funky groove that is gradually infused with rock.

The first single, “Bigger Than Us”, is a catchy, anthemistic rock song that definitely has mainstream appeal (and for an interesting experience, watch the music video).  Expect this tune to be the biggest hit from the album and significantly expand the band’s fan base.  The fourth track “Peace & Quiet” becomes laughable, since the ‘80s pop/rock throwback becomes a little too obvious and ridiculous.

One of the surprises is “Holy Ghost” – a blending of club beats and guitar perfect for the dance floor.  Somehow, the band makes it work.  However, songs near the end of the album, such as “Bad Love”, lose their luster.  They’re simply not as memorable, but there are no terrible tracks.  The main drawback is that the pop aspect tends to give the album a less distinctive sound.

Like their debut album, love is a continuous theme throughout Ritual.  The word itself is even mentioned in two song titles.  Ritual‘s themes are also less dark, and the lyrics are more about personal feelings of love and loss, rather than the several songs expressing these themes using storytelling on To Lose My Life.

Ritual may not be the definitive album for White Lies, but it marks an important turn in the group’s sound.  It will be interesting to see how their musical style evolves in the future.

MP3 Stream: “Bigger Than Us“