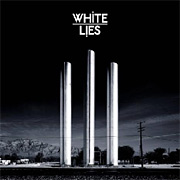 Deep vocals, black outfits, and driving rock together have become a major piece of the musical puzzle over the last few years.  White Lie’s debut album evolves that Joy Division-owing style a bit further, mixing in over-the-top synths and even more grandiose refrains.

With the album title To Lose My Life, and tracks called “Death” and “Nothing To Give”, the gloom here is as thick as molasses.  What makes it interesting, though, is the soaring effects applied to the downward spiral of emotion, at the very least creating a compelling drama.  The half-maniacal cackle of “But if Judgment Day started tonight/At least I’d know I was right/And I’d be laughing at the end of the world” on “A Place To Hide” has a inspired despondency that’s actually nicely magnified by the energy of the explosive alt-rock melody.  There’s an apocalyptic atmosphere throughout To Lose My Life, with the overly death-seeking lyrics strongly driven by jagged guitars and thunderous drums that seemingly possess the adrenaline rush of watching a mushroom cloud expand.

It’s all-or-nothing with To Lose My Life.  Seeking immediate escape from the world crashing in around them, White Lies employs the save yourself approach with a heavy power-pop drive throughout the album.  It cements the band’s image almost permanently, but at least it’s a powerful one.