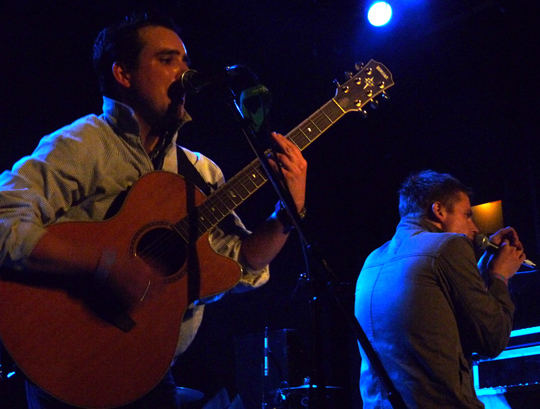 Brooklyn’s White Rabbits made their name in this town of oh-so-many bands with some saloon-style dancehall rock that could electrify the crowd (QRO review), and they bottled & sold that all on 2007’s Fort Nightly (QRO review).  On their long-awaited follow-up, the just-released It’s Frightening (QRO review), the six-piece took a major step forward in artistic skill, but Frightening is not as immediately accessible as Nightly, even if it holds up better in the long term.  So how would White Rabbits fare in their return to New York’s Bowery Ballroom (QRO venue review) on Thursday, May 21st?  Very well, as it turned out. 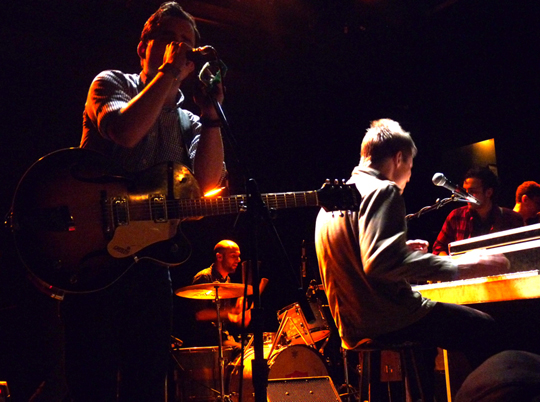 Click here for photos of White Rabbits at Other Music in New York, NY on May 11th, 2009 in the QRO Photo Gallery

A mere two days after the release of Frightening, there was the possibility that the crowd, despite a hometown one for the Rabbits, might not be familiar enough with the new stuff.  The Bowery date was kicking off a nationwide tour for the band, so they themselves might also not be familiar enough with playing the actual new material.  Indeed, other than a pair of back-to-back preview shows at the smaller Mercury Lounge (QRO venue review) in February (QRO review), it had been a long time since White Rabbits had played the Big Apple, increasing the anticipation.  And then there’s the fact that Frightening doesn’t translate as easily to a live setting as Nightly.  It all could have spelled problems, but the group was confident, the crowd was warm, and, most importantly, the music was good.

White Rabbits playing "While We Go Dancing" live at Bowery Ballroom in New York, NY on May 21st, 2009:

Click here for photos of White Rabbits at NYU's Strawberry Festival in New York, NY on May 1st, 2009 in the QRO Photo Gallery

Click here for photos of White Rabbits at Music Hall in Williamsburg in Brooklyn, NY on June 7th, 2008 in the QRO Photo Gallery

Click here for photos of White Rabbits at Webster Hall in New York, NY on March 4th, 2008 in the QRO Concert Photo Gallery

White Rabbits started with the rhythmic “Rudie Fails” and “The Lady Vanishes”, the two Frightening songs maybe most like Fort Nightly, before going into that record’s bopping “While We Go Dancing”.  But it was definitely Frightening that was the center of the night (they played all of it but the sad closer, “Leave It At the Door”); live, the band was able to expand on the record’s percussive-focused tracks.  Moreover, they were able to convert the somewhat spastic live energy they’d previously delivered on stage into a more intense laser.  They started that with the three Frightening pieces that seemed like they would have been the most difficult, live (outside of “Leave It”), “They Done Wrong/We Done Wrong”, “Right Where They Left”, and “Midnight and I” – back-to-back-to-back.  The three dark, almost haunting songs form the core of the band’s new sound on Frightening, and did likewise on stage, into a driving power that was only restrained by rhythm.

White Rabbits playing "Right Where They Left" live at Bowery Ballroom in New York, NY on May 21st, 2009:

Click here for photos of White Rabbits at their last time at Bowery Ballroom, on December 13th, 2007 in the QRO Concert Photo Gallery

After that intro & intensity, the Rabbits relaxed in the second half of their show, giving the crowd the dance parties they knew, with Fort Nightly’s great “Kid On My Shoulders”, “Take a Walk Around the Table”, and single “The Plot”.  It let the audience relax, too, and enjoy the good times, while still respecting what the band had accomplished recently.  And the group still leavened in a little darkness, with Frightening’s “Company I Keep”.

White Rabbits playing "Kid On My Shoulders" live at Bowery Ballroom in New York, NY on May 21st, 2009:

Click here for photos of White Rabbits at Highline Ballroom in New York, NY on July 9th, 2007 in the QRO Concert Photo Gallery

White Rabbits closed out their show by summing up their new sound, both on record and now live, starting with the percussion of “Lionesse” and pressing right through to the ultra-effective single “Percussion Drum”, with singer/keyboardist Steve Patterson (QRO interview with Patterson & guitarist Alex Even) literally jumping off his piano bench when singing the chorus line, “Cause I know it’s way too wrong”.  That sent the band into a short encore break, but they returned with the new “Foxhunting” (note: that may not be the title of the song, as it was taken from the set list, and the band often uses names other than the song’s title on the set list – QRO photo), a restrained, lounge-y, shadowy piece that will take some getting used to, but Rabbits picked the right spot to introduce it, between Frightening’s strongest two tracks, “Percussion Drum” and the night’s finisher, “The Salesman (Tramp Life)”, where Patterson would have been jumping off his seat during chorus line “Recognize me!” if he weren’t already standing up for that one. 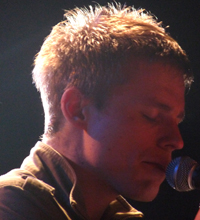 It’s Frightening does seem to have seen Patterson taken over full lead vocalist duties, from sharing it with singer/guitarist Greg Roberts on Fort Nightly.  But other than that, and new bassist Brian Betancourt (of Hospitality – QRO photos – and Frances – QRO photos), the band’s set-up on stage is pretty consistent, with Patterson’s piano in the center, perpendicular to the stage lip, Roberts on one side, Even on the other (doing that leaning over bob thing he always does, which does fit well with all the rhythm), and drummer Jamie Levinson, multi-instrumentalist (including drums) Matt Clark, and (now) Betancourt at the back.  This isn’t exactly ideal, as if you’re to the house-right, it can be hard to see Patterson & Roberts, but if you’re on the house-left (like your correspondent), Even 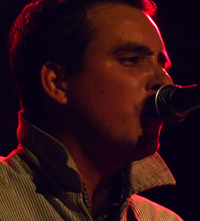 & Clark disappear – and wherever you’re standing, it’s hard to see Betancourt & Levinson.  That’s a particular problem during “Percussion Drum”, which has Clark & Levinson dueling on standing drums, but on stage, Levinson is seated behind Patterson’s piano (as opposed to the excellent view of the two, face-to-face, drum-to-drum, when White Rabbits played Late Show with David Letterman that week – their second appearance on that show – QRO Indie on Late Night TV).  But such is the difficulty when you’ve got six members, including two drum sets and a singer/pianist (someone needs to invent a see-through piano, Wonder Woman’s airplane-style).

White Rabbits surprised many by so significantly upping their abilities with It’s Frightening, when they could have easily kept riding the dancehall good times of Fort Nightly.  And their live show continues that surprise, by living up to the fun of live Nightly with an intense Frightening.  Though maybe, by now, we shouldn’t be surprised at all the Rabbits can do…