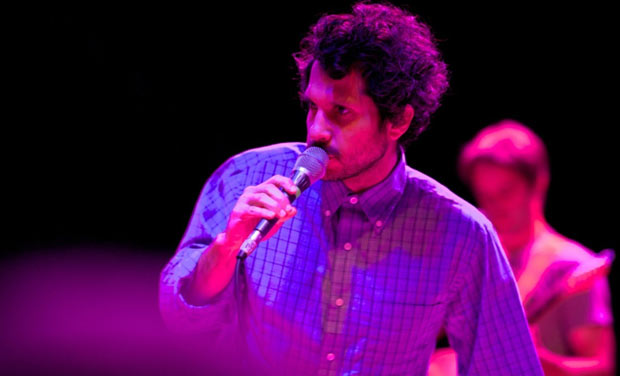 Click here for photos of WHY? at 2014 Middle of the Map Fest in Kansas City, MO in the QRO Concert Photo Gallery

Click here for photos of WHY? at 2012 Le Guess Who? Festival in Utrecht, Netherlands in the QRO Concert Photo Gallery

Click here for photos of WHY? at Williamsburg Waterfront in Brooklyn, NY on July 11th, 2010 in the QRO Concert Photo Gallery

Click here for photos of WHY? at The Social in Orlando, FL on December 12th, 2009 in the QRO Concert Photo Gallery

Click here for QRO’s review of WHY? at Crystal Ballroom in Portland, OR on October 15th, 2009

It’s easy to forget what a huge impact that skilled musicians can make.  That wouldn’t seem like something that’d easily fall off the radar, but the use of actual, real live instruments isn’t as common practice as it once was.  In a world of AKAI MPD32’s and MacBook Pro’s artists can achieve surgical accuracy with virtually any sound that can be dreamt up.  What’s easy to forget then is the how it feels when that surgical accuracy is executed by the human hand without the aid of an i7 Quad-core processor.

Some bands are just plain good at it – WHY? is one of those bands.  The group’s core of Yoni and Josiah Wolf, Doug McDiarmid and Liz Hodson have been joined recently by some female instrumentalists, and the resulting set is full and brimming with moments of true instrumental grandeur.  But first, the concert going people of Lawrence, Kansas had to sit through a combination opening performance/soundcheck that bordered on torturous.  The first act, a loquacious DJ that goes by Jel, experienced some technical difficulties that made for some painful moments, culminating in an early end to his set, which was best for all parties.

The second act of the night belonged to Serengetti, a Chicago based artist whose storytelling character-rap is reminiscent of pre-Goblin (QRO review) Tyler the Creator.  Serengetti’s characters are more ‘everyman’ than those of the dark and twisted monsters that of Tyler’s creation.  Serengetti delivered his lyrics in a sloppy, almost stumbling cadence, and yet not once did it feel as though he had lost the beat.  Instead, his almost stream of consciousness stroll through his songs made it feel more like a monologue that by pure coincidence, was being spit over a beat.  It gave his set a sense of realism through quasi-theatre. 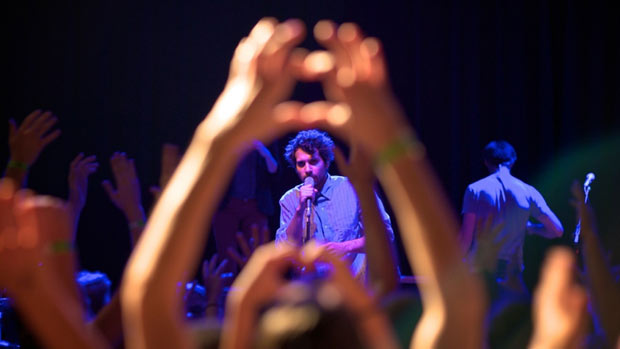 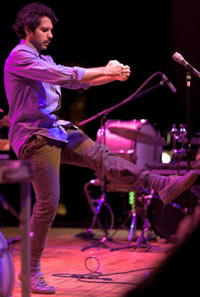 The Granada is a curious place.  Much, one’s sure, like other college town venues, it goes dead when school is not in session, and through the summer months, artists are treated to a measly crowd that makes the modestly sized Granada feel cavernous.  But it’s the type of place that reacts well to being packed in with people, and this was the case for WHY?.  Students had just arrived on campus a week or two earlier, and this show was easily one of the most anticipated since the reconvening of classes.

By the time WHY? took the stage, both levels of the floor were comfortably filled and the most prime real estate had been claimed by the parties most prepared to get stuck in and rub shoulders.  Atmospherically speaking, it was almost surreal as the light from the merch table put on a shadow puppet show with t-shirt transactions and animated interactions blown up and silhouetted against the wall.  This was a crowd that knew WHY? and were prepped and ready to celebrate the first great show of the semester.  It turned out nothing less than that.

The six-piece crew took the stage and immediately hit the crowd with “Good Friday”.  Yoni Wolf’s delivery was tense, paranoid, and more than anything, exacting.  He’s a frontman who knows exactly what he’s doing.  Versatile and unafraid to put on a show for his audience, Yoni prowled the stage all night, quipping with the crowd in between songs, and switching between singing and spitting in a dance that can swing the texture of any given track from hip-hop to indie to folk and even bordering on ska when the moments strike. 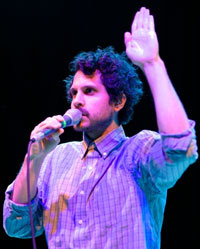 But the instrumental backing is the foundation on which he stands.  The set-up itself is impressive.  Two drum kits are used; one is a (for the most part) traditional set-up, with the other incorporating a xylophone and extra bass drum among other various noisemakers.  Not too many bands can pull of the whole double-drummer thing.  Radiohead is currently the definition of “pulling-it-off” as they tour (QRO live review) with Portishead’s Clive Deamer.  The rhythms they create are so complex that they require both drummers to be in perfect sync at all times.  They operate in a symbiotic relationship, one playing off the other, building tapestries of rhythm that would be otherwise impossible without the help of a synthesizer.  WHY? proves that you don’t have to be Radiohead to successfully hands two drum kits.  Boy did they handle it.  Not a snare misplaced the whole night.

It was a no sample, no loop zone.  WHY? manages to create songs that sound looped, repetitive rhythms from all parties involved, backing vocalists, key players, even the guitar has responsibilities that often border on mathematical reproduction.  The technical prowess that oozed from the stage was only overshadowed by Yoni Wolf’s effortless interactions with the crowd.

The hordes of youth were electric with energy, and it seemed to transfer through the air to anyone who would breathe it in.  Energy like that is infectious, and if you give yourself to it, the night is guaranteed to be memorable.  Everyone in the Granada Friday night committed themselves to having a great night, Yoni Wolf and WHY? were more than happy to oblige. 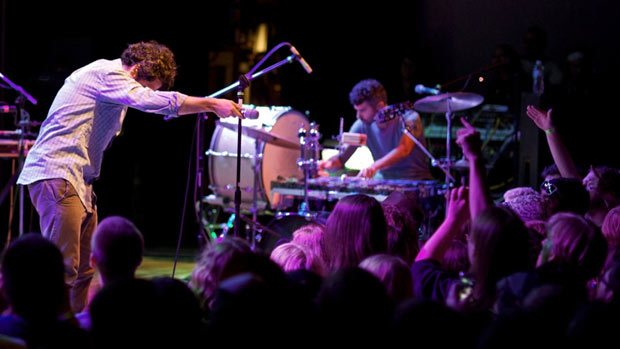