More than just another female-fronted garage-sweet act from Brooklyn.... 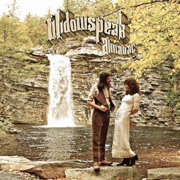 When Widowspeak came out of New York two years ago with their self-titled debut, one could be forgiven for thinking, ‘Yet another female-fronted garage-sweet act from Brooklyn.’  However, there was something more underneath it all, and that’s only become more the case with follow-up Almanac.  Their first record since stripping down to a core of two in singer/guitarist Molly Hamilton & guitarist Robert Earl Thomas is naturally a more fuzzy guitar affair, but still has the haunting and/or Western elements that made Widowspeak something more.

Admittedly, Widowspeak are maybe at their best on Almanac when they go full-bore with guitar fuzz on opener “Perennials”, whose sweet flow makes it very hard to stop listening. But the rest of the album is most interesting when they add something more beneath/behind the fuzz and Hamilton’s sweet voice, such as the country-twang & -rock on “Ballad of the Golden Hour”, gothic Western loss with “Sore Eyes”, bass-heavy in “Locusts”, and even organs on “Thick As Thieves”. Contrastingly, when they just go light, like with the la-la “Minnewaska” or ill-married echo/sway following “Spirit Is Willing”, Almanac is decidedly more run-of-the-mill.

Garage bands have been breaking out of Brooklyn for years now, especially female-fronted ones like Vivian Girls (QRO album review) – and Widowspeak play a free ‘Converse Rubber Tracks’ show with the Girls Vivian at Brooklyn’s Music Hall of Williamsburg (QRO venue review) on February 15th (QRO NYC Show Preview).  But while many of those acts tend to slide or repeat themselves (such as Vivian Girls…), Widowspeak are still evolving.

The Rest – “Always On My Mind”