Wilco have the aspects of many different acts, without being like any one of them.... 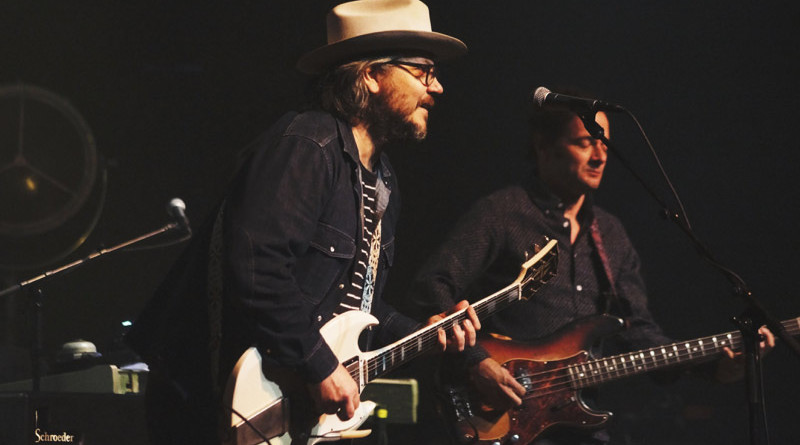 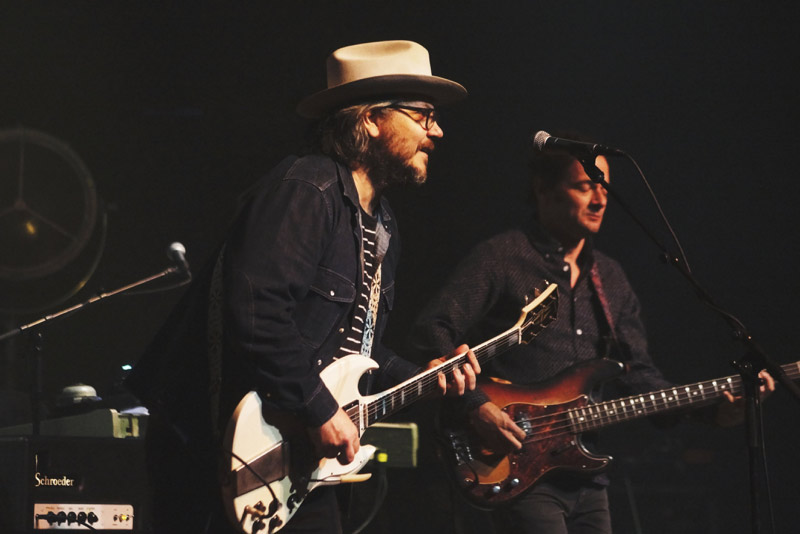 Wilco have the aspects of many different acts, without being like any one of them. Their alt-country sound is both quintessentially them, while also being the very definition of ‘alt-country’. They’re indie, yet appeal to a definitely wide and upscale crowd. They’ve been around for a few decades now, but still seem young (at least for a country band). They’ve had major success, yet there’s not a single song of theirs that one would call their ‘big hit’. Their shows, like the one at Brooklyn’s Kings Theatre on Friday, February 5th, are both warmly familiar and wholly original.

Their Friday performance at Kings Theatre (QRO venue review), the newly refurbished grand theatre in Kings County, was the first of two nights there and four nights in the NYC region (the two prior nights had been at Capitol Theatre in Westchester County – QRO review of Wilco at Capitol in ’14). Wilco, however, are a band that can sell multiple nights, even with ticket prices high for the indie scene, for seemingly every indie-adult loves Wilco – the kind of crowd where you could see someone from a Brooklyn hipster band and celebrity chef Mario Batali (your correspondent was behind him in line buying a beer). And the group can fit in from outdoor spaces (QRO live review outdoors) to jam festivals (QRO photos at a jam festival) to a classy space like the grand Kings Theatre.

Wilco was touring last fall’s Star Wars (QRO review), a record released for free online. Whenever an act does that now-more-frequent move, there is still a devaluation of the release, that it might just be a collection of unreleased tracks – and Wilco were coming off of releasing a greatest hits collection & a rarities collection. But for this tour, Star Wars took front & center, being played in full by the band to comprise the first half of the set.

Such set list design can be a risk. As opposed to playing a beloved classic album from top-to-bottom, playing the new album in full can be an artist just doing what they want to do (i.e., play the new stuff), vs. what the crowd wants (i.e., hear the old stuff), especially when coming from a successful veteran who will sell tickets no matter what. But just as Star Wars was a record that can stand with other, ‘regular’, Wilco releases, playing it in full worked at Kings Theatre. It gave the album room to breath, for songs like “Random Name Generator” and “The Joke Explained” to be their most fun, “Where Do I Begin” to have its most meaning (and to see drummer Glenn Kotche get his spotlight for his drum solo, while the front of the stage changed guitars), even “You Satellite” to feel as spacey as anything the (admittedly not spacey) band has done.

Singer/guitarist Jeff Tweedy closed this portion of the set by saying, “That was Star Wars… It could have as easily been called ‘Spaceballs’… Or ‘Cease and Desist’…” This was a night where the usually talkative frontman didn’t joke around as much, but that was a very worthwhile line. 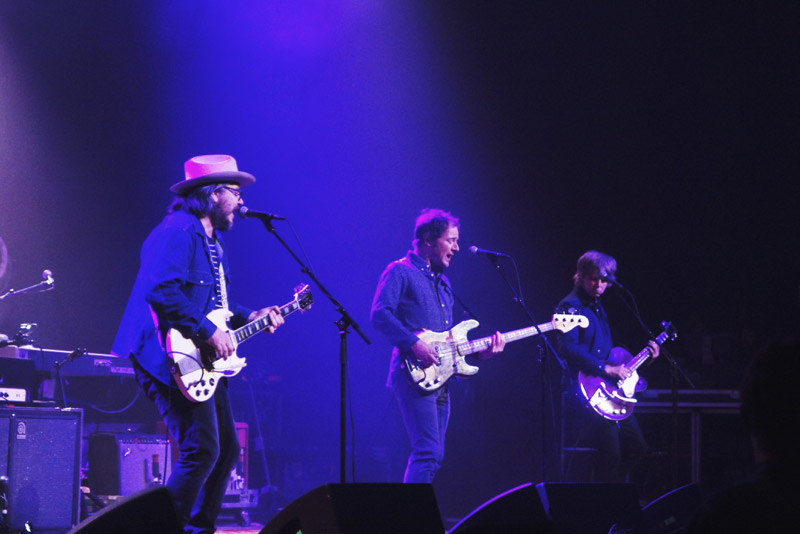 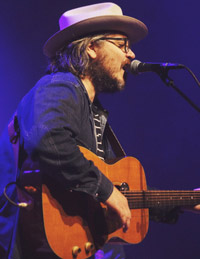 Having Star Wars comprise the first part of the evening also meant that you knew the band would play ‘the hits’ for the back half. “I Am Trying To Break Your Heart” might be as close as Wilco have to a ‘signature hit’, as much from the tour DVD of the same name as it’s own greatness (with Tweedy taking off his cowboy hat and tipping it to the crowd during the line, “When I said, ‘Hello’”). Clear fan favorite remains “Heavy Metal Drummer”, which can make anyone happy, and then the heartfelt love letter “I’m the Man Who Loves You” – all three are from 2001’s Yankee Hotel Foxtrot, probably their most successful/loved record (yet was the one Warner Brothers rejected). 2004 follow-up A Ghost Is Born was also unsurprising well represented on the ‘greatest hits’ back half, with such favorites as “Hummingbird”, “Handshake Drugs”, and “Late Greats”. 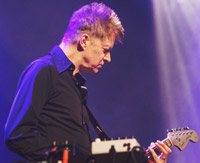 But it wasn’t all just the must-plays like those ones, “Via Chicago” (from 1999’s Summerteeth), or “Impossible Germany” (from 2007’s Sky Blue Sky – QRO review) and its amazing guitar solo from Nels Cline. Recent number “Art of Almost” (off of 2011’s The Whole Love – QRO review) matched “Satellite” in spacey not-typical Wilco. The group also reached far back for the first song they ever recorded, “I Must Be High” from rarely played debut A.M. (“I think we exhibit growth…”). Yankee’s acoustic “Kamera” was done the rock “Camera” way from the More Like the Moon EP (and Alpha Mike Foxtrot rarities collection). 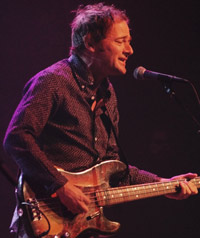 For the encore return, Wilco changed it up again, going semi-acoustic (including a new, second drum set in front for Kotche). This upped the intimacy (and the sing-alongs) for “Misunderstood”, “I’m Always In Love”, and “A Shot In the Arm”. But the most special moment was how the band closed out the evening – by covering the recently late, longtime great David Bowie’s “Space Oddity”. Leave it to Wilco to take the space-iest song by the starman who fell to Earth, and do it acoustic (with maximum crowd sing-along).

Actually, the comparison might be apt. Like Bowie, Wilco have defined a sound, without being defined by it. They’re both loved by the mainstream & the alt-stream. There’s a definite ageless to them. They’ve both had many great records & songs, without any one massive hit. And they are both warmly familiar and wholly original. 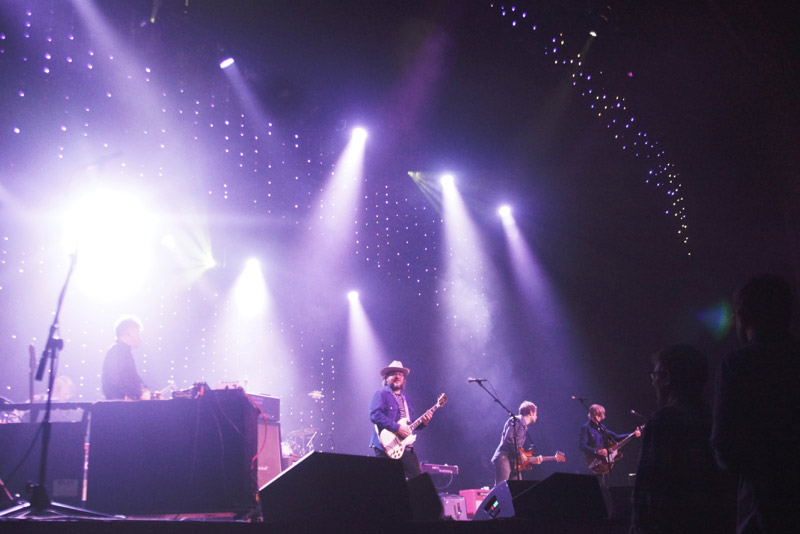