What do you do when you’ve been so good for so long, when your back catalog is so great?... 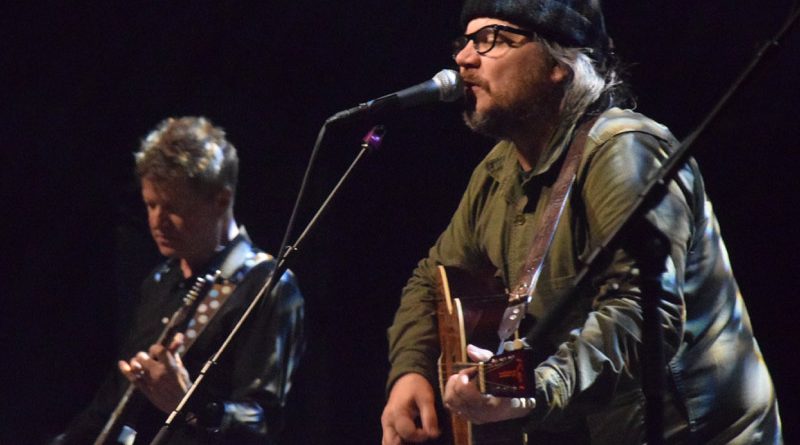 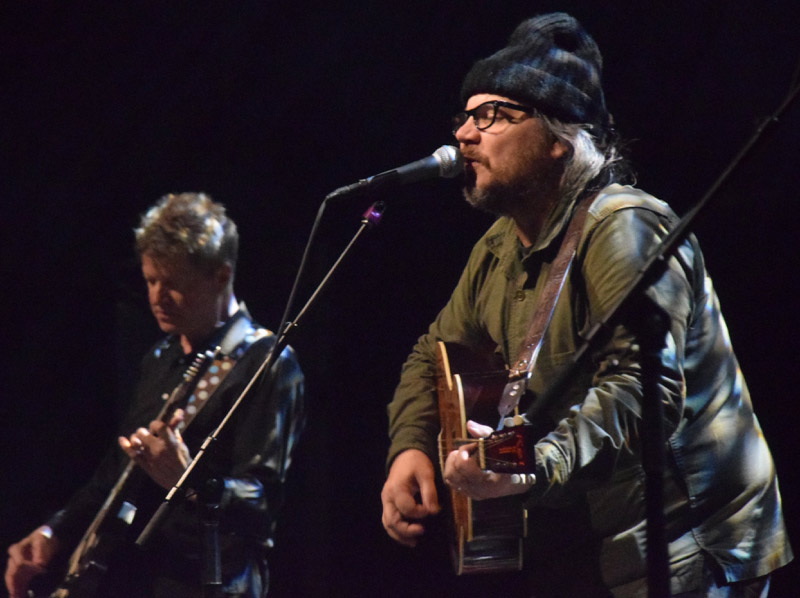 What do you do when you’ve been so good for so long, when your back catalog is so great? Do you just play the old stuff over & over again? Do you put out new records, even if people mostly want to hear the old stuff? What happens to those new records when they’re not new anymore? How many times can you play the late greats before they get repetitive? How do you pick which new songs will stand the test of time (and judgmental audiences)?

Well, Wilco has been doing it for years, like on Sunday night, October 13th, at Brooklyn Steel (QRO venue review).

First things first, this show was being live-streamed, and in addition to making the photographers stay on one side [but thanks for letting us use the step up], that video is still available, so you might want to just watch it and not read this. 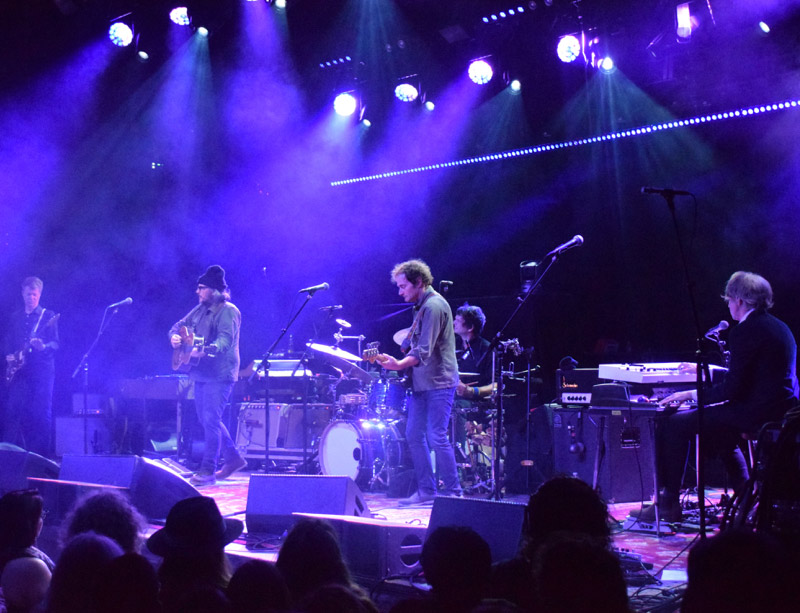 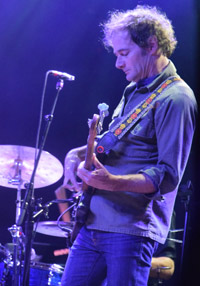 Wilco has been the definition of alt-country/folk for years now, but more recently they’ve been leaning towards their more folk side, like with this year’s Ode to Joy (QRO review). They started this set with two songs from that record, “Bright Leaves” and “Before Us”, giving the night a relatively subdued open – but Wilco is in it for the long haul (the show was over two hours), and so are their fans (the packed place didn’t thin out at any point, despite being a school night and the babysitter will charge extra). Even the next two, while being off their beloved A Ghost Is Born and Yankee Hotel Foxtrot from earlier in this century/millennium, weren’t those records’ best known, but rather “Company in My Back” and “War on War’, followed by another Ode, “One and a Half Stars”. 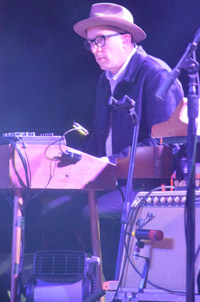 Not that Wilco left out the “Late Greats” (though that Ghost track wasn’t on tap for Sunday night, having been the closer the prior night at Radio City Music Hall). But they didn’t dominate – soon Ghost gave “Handshake Drugs” and a wonderful sing-along to “Hummingbird” (which frontman Jeff Tweedy said, “Made last night look like a bunch of stiffs. I mean, it was a nice place, I guess…”), plus finished the evening out with “I’m a Wheel”, but no “Late Greats” or “Spiders (Kidsmoke)”. Similarly, Yankee had the two-set of “Heavy Metal Drummer” and “I’m the Man Who Loves You”, easy favorites, but heart-breakingly no “Jesus, Etc.” or “I Am Trying To Break Your Heart”.

Instead, Wilco nicely mixed the Odes with selections from across their discography. 2016’s Schmilco (QRO review) gave the beautiful “Someone To Lose”, and 2015’s free online Star Wars (QRO review) the fun “Random Name Generator”. “You and I” from 2009’s Wilco (The Album) (QRO review) was apparently a highly requested number, Tweedy adding that people, “Missed the old, experimental Wilco.” There was of course the impossibly good “Impossible Germany”, replete with guitar Nels Cline’s epic solo (which not only earned a round of applause, but Tweedy announced that he was taking his hat off for it, Cline then thanking the crowd) from 2007’s Sky Blue Sky (QRO review), but also the hushed “On and On and On” that had the audience hushed.

When someone shouted for Schmilco, Tweedy noted, “You’re not up to date,” adding, “One of the nice things about putting out a new record is people start to say nice things about your old records. Schmilco’s not so bad now, huh?…” 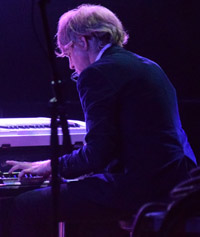 That distance has allowed people to appreciate not just relatively more recent Wilco records, but also the very old stuff. Indeed, Tweedy at one point pulled out “Laminated Cat” from his circa 2000 side project Loose Fur with drummer Glenn Kotche (which led to Kotche joining Wilco). Meanwhile, after “Box Full of Letters” from the band’s first, most straight-country/rock record, 1995’s A.M., and before catchy Ode single “Everyone Hides”, Tweedy noted that super-fan “Paul” up front was the “star” in the video for the single, “If you got really good eyes.” “We didn’t pay him, so if you see him, buy him a beer.”

Wilco’s video for “Everyone Hides”: 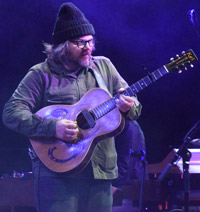 Tweedy also joked when someone called him their hero, “Times really are tough all over.” And he & the band did the, ‘Let’s just pretend we left like that was the last song, and came back, because we get to play another song,’ something they apparently only learned “recently” (should have asked Mike Doughty, the inventor of that move – QRO spotlight on). There were big cheers on their ‘return’, including their own mock-surprise, before Tweedy added that the crowd shouldn’t extend the applause, “Since that defeats the purpose” (he then managed to catch the one piece of confetti somehow in the air).

But this is Wilco, so there as a second, full-on leave-and-come-back encore, going from Ode piece about a dream about something that really happened, involving a liquor store manager who provided cocaine to his stock boys on busy nights (“And I woke up wanting cocaine, and I didn’t have any – and that’s the best part of the story…”), “An Empty Corner”, to three from 1996’s double-album Being There, “Red-Eyed Blue”, “I Got You (At the End of the Century)”, and “Outtasite (Outta Mind)”, plus “I’m a Wheel”, all, “Rock songs from our older records.”

So in one night, Wilco covered twenty-nine songs, eleven albums, and almost a quarter-century of classics, new songs, old standards and surprises. That’s how you do it, all these years. 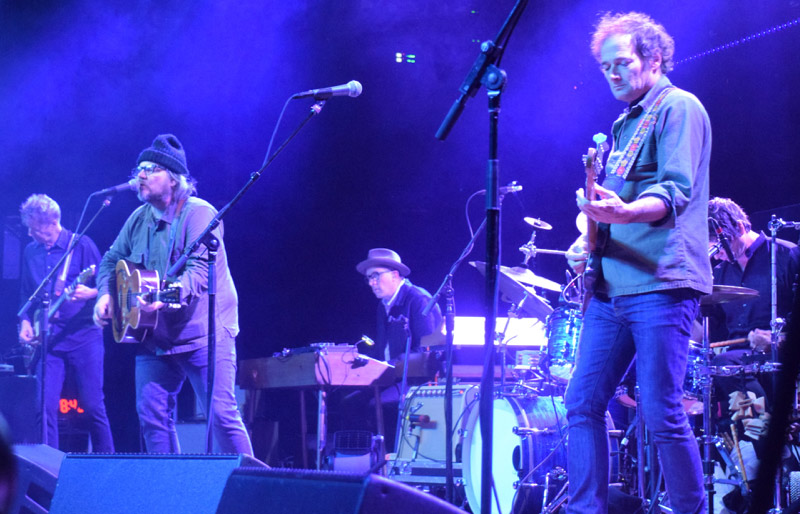