The crowd was ready to unwind and enjoy a rare opportunity for live music by two talented, yet diverse bands.... 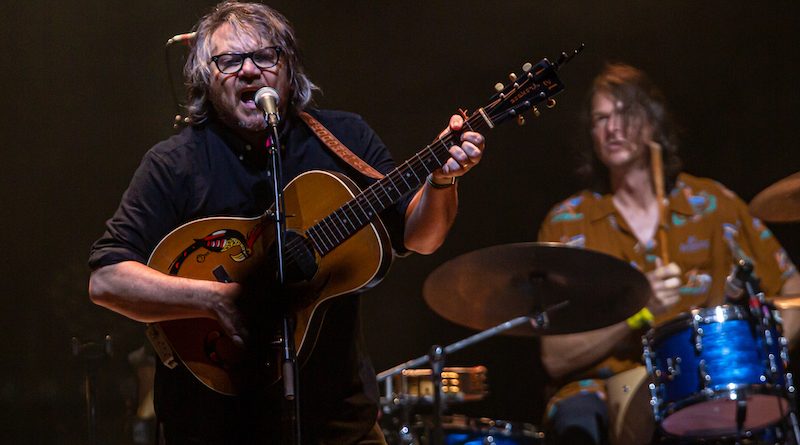 It was a balmy Saturday evening at Candence Bank Amphitheatre in Atlanta (known by ATLliens as “Chastain Park”) on August 14th. An earlier rain had washed away the worst of the notorious August heat, creating the perfect environment for a night of music under the stars. The recent pandemic upsurge reared its head in some notable ways; a Proof of Vaccination requirement was announced the day of the show, and mutual concern was reflected in the less-than-full venue. None of this dampened the mood of the crowd, however, who were ready to unwind and enjoy a rare opportunity for live music by two talented, yet diverse bands: Wilco and Sleater-Kinney.

Sleater-Kinney took the stage with “High In The Grass” from Path To Wellness (QRO review), their latest album, with a decidedly more straightforward rock sound than their earlier, punkish-pop efforts.

Carrie Brownstein, frontwoman and guitar virtuoso, projected an impish vibe, as she jumped and tapped to the rhythm in her black boots and high-waisted black pants. By contrast, co-leader, Corin Tucker, in a marigold sundress, served sublime guitar licks, and vocals with the occasional screech, reminiscent of the band’s “riot grrrl” roots. Though their styles, like their approaches to music, are different, they work together in superb harmony.

Along with Brownstein and Tucker, there was a collection of new faces in the lineup – all the picture of boho chic. The band’s current roster includes guitarist Fabi Reyna (who rocked some excellent solos), drummer Vince Lirocchi, bassist Bill Athens, and keyboardist Galen Clark.

In addition to four songs from Path To Wellness, the band played a nice mix of tunes from earlier albums, No Cities to Love (QRO review), The Woods, and a smattering of songs from The Center Won’t Hold (QRO review), and Dig Me Out.  While all of the performances were solid, the crowd was most excited by “Hurry On Home”, “Price Tag”, “Modern Girl” and the finale, “One Beat”.

At one point, Tucker asked the audience if this was the first time since COVID that they were enjoying live music again. Judging by the response, the answer was a resounding “yes,” and this was a great night to come back home.

Click here for photos of Sleater-Kinney at 2022 Riot Fest in Chicago, IL in the QRO Concert Photo Gallery

Click here for QRO’s review of Sleater-Kinney at Paradiso in Amsterdam, Netherlands on March 19th, 2015

After a brief break between sets, the anticipation of the crowd was rewarded as Wilco walked on stage. The pandemic must have been top-of-mind for Tweedy and company, as they began their show with three rocking and ironic numbers: First was “Shot in the Arm” with the apropos lyric, “Maybe all I need is a shot in the arm.” The words rang true, given our collective need (literally and figuratively) for a shot – of vaccination – and music. Next, came “Random Name Generator” with the touching verse; “I think I miss my family I found,” as a graying, bespectacled Tweedy shared how much he had missed the time spent with his audience and adopted family. Rounding out the subtly COVID-themed opening, was “At Least that’s What You Said”, with the memorable line; “Isn’t it sad, I’m immune.”

The audience, however, was not immune to Wilco’s charms. Though fully engaged and enthusiastic, they were markedly relaxed (perhaps due in part to smell of “herbal refreshment” wafting through the air). The band took the crowd on a journey through a wide range of music: from their latest album, Ode to Joy (QRO review), including “Love is Everywhere” and “Everyone Hides”, to songs from no fewer than ten past releases. The setlist ran the gambit of old favorites like; “I Am Trying to Break Your Heart”, “Jesus, Etc.”, “I’m the Man Who Loves You”, “I’m Always in Love” and “Box Full of Letters”, from their 1995 debut.

Wilco went full-on “jam band” with “Impossible Germany”, when guitarist Nels Cline performed his trademark lengthy, yet transformative solo, lifting the audience to new heights. Cline then brought the crowd back down to earth, as he seamlessly rejoined his bandmates in a perfect musical partnership that only comes with decades of shared experience.

Every member of Wilco is a pro, from the aforementioned Cline to drummer Glenn Kotchke, bassist John Stirratt, keyboard player Mikael Jorgensen and multi-instrumentalist Pat Sansone, not to mention, Tweedy; the anchor, songwriter and front man for the band. To see such talent working together like the well-oiled machine they have become, is as much a joy for the audience as it appears to be for the group.

This tour may have been the first after a very long and unwelcomed break, but the time Wilco has been parted from their fans immediately fades into oblivion as they reconnect with them in such a visceral and poignant way. By the time Wilco performed their encore, the Woodie Guthrie-penned “California Stars”, the stars were out in full force in Atlanta – in the sky and on the stage – a welcome end to a most welcome and memorable evening of music.

QRO’s review of Wilco at Brooklyn Steel in Brooklyn, NY on October 13th, 2019

Photos of Wilco at 2017 Newport Folk Festival in Newport, RI

Photos of Wilco at 2017 Eaux Claires in Eau Claires, WI

Photos of Wilco from 2012 Primavera Sound in Barcelona, Spain