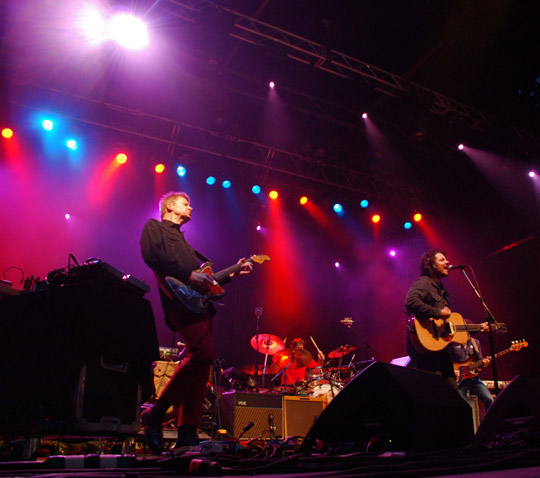 So much of the alt/indie world is obsessed with the ‘new’.  It’s all about finding the next new band that’s gonna break, and knowing about them before they break.  It’s all about this week’s latest release, or leaks of unreleased material.  It’s even about deriding a band’s effort after they break, the ‘sophomore slump’ and saying, “I liked their old stuff better.”  While this does make the world more open for new alt/indie bands, and keeps people from just listening to the same stuff all the time, it takes away from the classics, and draws attention away from veterans who are still putting out great new records.  That’s what made alt-country vets Wilco’s performance Monday, July 13th at KeySpan Ballpark (QRO venue review) on Coney Island not just excellent as always, but refreshing as well.

Of course, calling any band that could play a baseball park (albeit a Single-A club, The Brooklyn Cyclones, named after the next door rollercoaster) ‘alternative’ or ‘indie’ is a bit of a stretch.  Their last two records, 2007’s Sky Blue Sky (QRO review) and this year’s Wilco (The Album) (QRO review) both made it to #4 on the Billboard charts, and 2004’s A Ghost Is Born won two Grammys.  Sky’s material was even licensed for a series of Volkswagen ads, and the band has been playing a whole host of ballparks on this tour.  Short of following Paul McCartney to The Mets’ new CitiField, Wilco doesn’t have much higher to go. 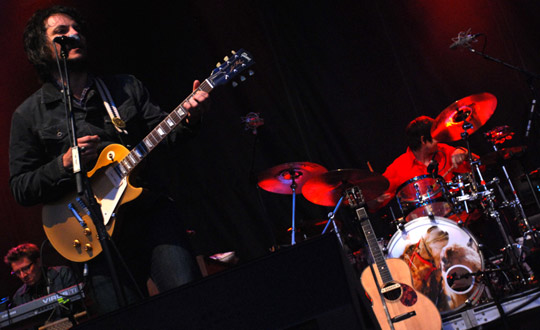 And this is because they’re a band that can play a twenty-six song set (twenty-seven, if you count singer/guitarist Jeff Tweedy leading the crowd in a rendition of “Take Me Out To the Ballgame”), with fifteen years of great material, nearly all of which was covered at KeySpan Ballpark (okay, they didn’t do anything from debut LP A.M., and only one from the following double-disc Being There, but that’s not what you were looking for…).  About a third of the set list was dedicated to Wilco, including the (unsurprising) opener “Wilco (The Song)”, with most of the rest of the set made up of tracks from the preceding three Sky Blue Sky, A Ghost Is Born, and Yankee Hotel Foxtrot.  Yes, many of the pieces were ones you knew that they were going to play, like Yankee’s “I’m Trying To Break Your Heart”, “Jesus, Etc.”, “I’m the Man Who Loves You”, and “Heavy Metal Drummer”, but that didn’t make them any less excellent, didn’t stop the crowd from singing along to “Break Your Heart” (and it was the second song of the night, after “Wilco”…), or keep “Heavy Metal Drummer” from being the song you most wanted to hear in the world, when the band returned for their first encore.  It was interesting to see which Sky Blue Sky songs made it from the Sky Blue Sky tour (QRO review) set list to the Wilco tour: the impossibly-good “Impossible Germany” was no big shock, but “You Are My Face” over “Either Way” in the sad category was, and otherwise they played Sky’s more upbeat tracks, “Hate It Here” & “Walken”, back-to-back.

Click here to download Wilco’s official recording of the show, given away free in return for asking for $15 minimum donation, for Haitian relief efforts, to either:

Not that Wilco couldn’t pull out some surprises, and not just in “I’m Always In Love” from 1999’s Summerteeth, the request choice from when the band invited requests on their website (“Actually, all the songs are requests,” Tweedy did add, “At least one person requested each song.  So at least one person is happy every night…”), though, unfortunately, there’s a reason the song isn’t a live staple.  Wilco threw out not one, but two tracks from the even-older Mermaid Avenue (where they worked with folk icon Billy Bragg, putting music to the lyrics left over in the estate of the late folk icon Woody Guthrie), not just live staple “California Stars”, but also closing out the whole night with “Hoodoo Voodoo”. 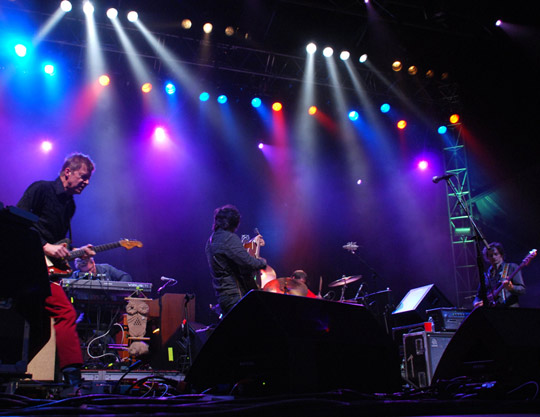 And even “California Stars” had some surprises, thanks to guest-singers Ed Droste (of Grizzly Bear – QRO photos) and Leslie Feist (QRO live review).  Feist contributed vocals to Wilco’s “You and I”, and was in town to reprise that role when Wilco performed on Late Show with David Letterman the following night (QRO Indie on Late Night TV).  Those who didn’t know their TV listings were surprised by Feist’s appearance on stage (and that was most of the crowd) for “You and I”, and she was joined by Droste for not just for the subsequent “California Stars”, but also the following “You Never Know” (from Wilco) and back on stage again to close out with “Hoodoo Voodoo”. 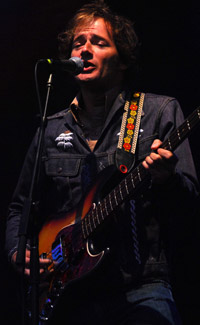 Going into their second encore break (this is a band that does two encore returns, folks…), Wilco invited all three members of opener Yo La Tengo (QRO photos) on stage for the epic, rockin’ jam “Spiders (Kidsmoke)” (from A Ghost Is Born), which also saw Tweedy not just lead the crowd in a clap-along, but praise them for their efforts (he also said earlier, “You guys looks awesome!  I’ve never said that before, I swear…”).  As fitting as it is to see the alt-Americana of Wilco where they play the nation’s pastime, Yo La Tengo (QRO live review) might have been even more apropos, as they’re named after an anecdote from the hapless ’62 Mets (The Cyclones are a Mets farm team) – Tengo singer/guitarist Ira Kaplan even brought ball to throw out into the crowd, because “I know that’s what you really come to the ballpark for…” 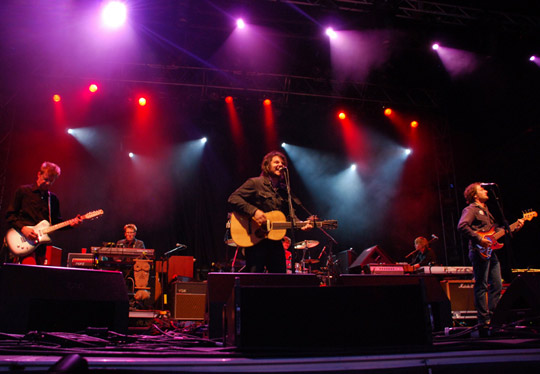 All these guest stars shouldn’t take away from Wilco (The Band).  Ever since the 2002 documentary I Am Trying To Break Your Heart, which chronicled the making of Yankee Hotel Foxtrot and showed the conflict between Tweedy and then-multi-instrumentalist/producer Jay Bennett, culminating in Bennett’s dismissal from the band, Wilco has been seen as a ‘Jeff Tweedy first & foremost project’ (though Break Your Heart is now tinged with tragedy, thanks to Bennett’s death last month).  Bassist John Stirratt, the only charter member of Wilco left, besides Tweedy, does his lead work in his side-project with Wilco multi-instrumentalist Pat Sansone, The Autumn Defense (QRO live review) – a.k.a. ‘the stage-right side of Wilco’.  This year’s live DVD Ashes of American Flags contained none of the Break Your Heart revelations, but did see Tweedy talking about the turnover in the band, and saying that it could suffer another line-up change – “Except John…”  Live, Stirratt’s steadiness can be a bit overlooked, and Sansone & pianist Mikael Jorgensen are stuck in the back, but guitarist Nels Cline really gets to shine with his solos, and no one in the band works harder than drummer Glenn Kotche (though he didn’t have the gong from last year…).  Yes, Tweedy’s still the center of things, but no one this side of Bob Dylan can dominate a whole ballpark on their own. 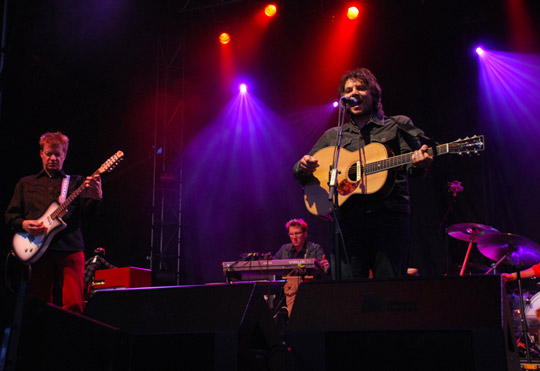 As America has shifted from the red state/blue state culture war divide to today’s greater understanding of the two sides (brought on by the calamitous state of affairs all Americans now find themselves in…), the traditionally ‘blue state’ alt/indie world has been embracing alt-country/folk in a major way.  But forget, if you can, the newest stripped singer/songwriter or hyped-up alt-folk, and remember “The Late Greats” (second-to-last song of the night).  Stop trying to stay young or recapture your youth by jumping on the latest fad, and be comfortable in an older crowd at a massive venue.  Just appreciate Wilco (The Wilco).